ONE THOUSAND AND ONE CULTURAL ILLUSIONS: ORIENTALISM IN THE COACHELLA VALLEY 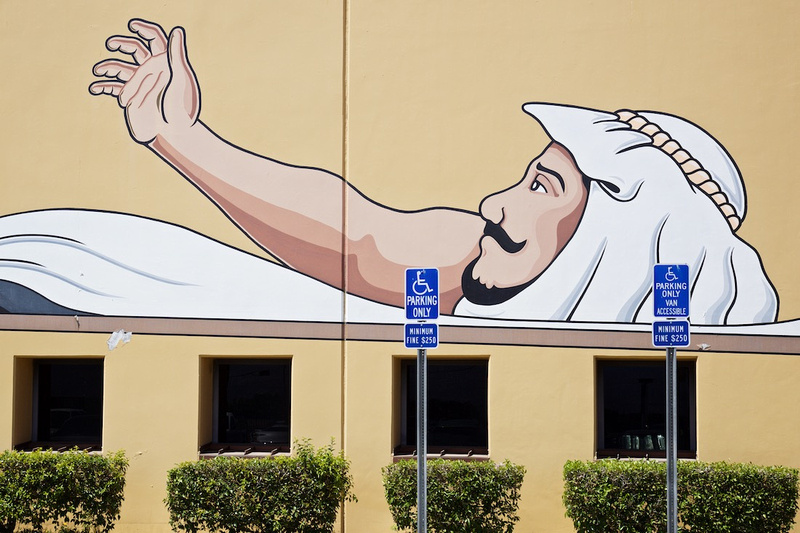 God, she was beautiful - my first image of the Orient - a woman such as only the desert poet knew how to praise: her face was the sun, her hair the protecting shadow, her eyes fountains of cool water, her body the most slender of palm-trees and her smile a mirage.

Our attitudes about the Orient and Middle East have changed significantly from the 1930s when movies, books, and marketing nurtured a popular fantasy of harem girls at your beck and call. Even earlier, Hollywood fed dreams in the audiences of Rudolph Valentino as The Sheik taking you to his Bedouin tent to show you his etchings. With a Middle East rife with geopolitical hatred and religious bigotry, riding off into the Saharan sunset has lost its romantic appeal. 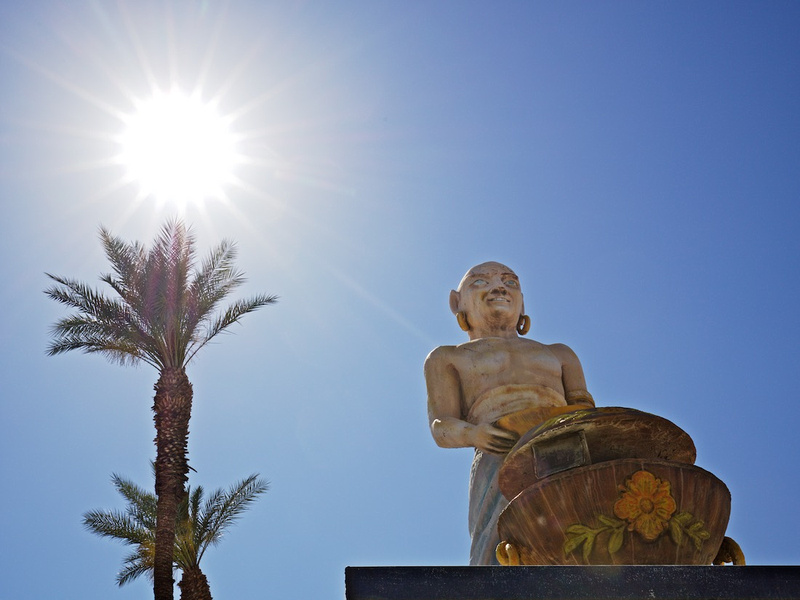 Our racial stereotypes of dark skinned terrorists have erased what was once a romantic distortion that was labeled Orientalism by academic Edmund Said. Much serious work now examines this study of our views of Asian peoples. In 1947, it was a different world when several business people of Indio coupled marketing their excellent and growing date crop with Oriental fantasies borrowed from Hollywood and One Thousand and One Nights to create what was at the time culturally insensitive, yet “dressing-up” fun. It became a very successful marketing ploy.

It was in these years that the International Indio Date Festival took shape and for the next thirty years had a musical pageant, a kitschy theatrical set, camels galore and everywhere you looked waitresses, townspeople, doctors, and lawyers dressed in faux Arabian Nights costumes.

Many people who do not know deserts first hand mistakenly think: “a desert is a desert is a desert.” Certainly the Mojave Desert of California is different from the Sahara, Gobi, and Iran’s Sarhad. But think of palm trees, sand dunes, colorful clothes, and engaging characters and you have stereotypes that cover all our desert fantasies, regional or international. Seventy years ago they added the pastiche of half naked belly dancers in halter-tops. Stir in seductive and mysterious, darkly handsome men, magicians, sadistic rulers, and you have sexual fantasies that have been loosed on the shopping land. Today this vision is quite anachronistic and we easily recognize it as such. We see women from different Muslim cultures in chadors, hijab, yashmak, or at least conservatively veiled in scarves, walking down our streets.

In the date market of the 1940s into the 1960s, sellers and consumers were seduced by the “Oriental” fantasies that Hollywood, Middle Eastern literature, Romantic paintings, and graphic arts in general had inculcated into our imaginations. But that was then, and now only the remnants remain in street names, business mottos, and gimcrack Muslim architecture at the Riverside County Fairgrounds located in the city of Indio, CA.

Perhaps it is best reflected in the early date merchandiser and farmer Mr. E. Floyd Shields in his small pamphlet with the long title “Coachella Valley Desert Trails: The Salton Sea Saga and the Romance and Sex Life of the Date.”  Chances are you were reading along casually until you got to “sex life.” The book had a picture of Mr. Shields in a pith helmet looking like your grandfather with a caption “Mr. Shields Holding Female and Male Date Blossoms.”

University of Chicago Professor Edward Said’s work on Orientalism, and in his book of the same name, has deeply interested me after my two years in Peace Corps Iran before the Islamic Revolution and as a film historian researching Oriental Hollywood films made in the American high desert. I experience both fascination and repulsion at the prejudices, distortions and negative attitudes about Arabian, Iranian and other Middle Eastern cultures that are prevalent now. Violence spawned by geopolitical tension and colonialism on the part of the West has exacerbated the fear of the “other” foreign culture.

The heyday of this ersatz pop culture adoption to sell dates was in the period of after WW2 into the 1960s. By then, international diplomacy and travel, increased cultural sensitivity, and now anti-ISIS and Muslim feelings have undermined the love of the Arabian fantasy. Other forces as well may be at work. Perhaps the images have lost their appeal and been stripped of innate sexual fantasy. The iconography is exhausted in the public mind. Indio is also developing a strong Hispanic culture and population, which now is filling in for the retreating Oriental one.

One stronghold remains for the by-gone Arabian infatuation and that is the annual Indio Date Festival, now the National Date Festival and now also the Riverside County Fair.

I cross Arabia Street and walk up to the gates, where the architecture is faux Oriental, actually influenced by many Eastern nationalities, and yet reflecting none. There are domes of no particular era, muqanas or miniature, pointed arches and simple patterns derived from geometric, arabesque, and floral designs. The security was extreme and all I could think of was the airlines security that followed 9/11, a modern artifact of Middle Eastern geopolitics today.

Inside the Festival it was row after row of food booths. Various rides outlined against the sky, many spinning and jerking attempts to extract what had recently arrived in each rider’s stomach. Off in the distance I could see several giant construction cranes working on a major project. Indio means to move on from its Middle Eastern pandering to a modern developing desert city. Among other projects, construction is proceeding on a prison.

I pass so many booths offering food: Texas doughnuts; Italian ices, Thai, Chinese, and more. You name it; they have it.  There was only one thing involving dates and that was an Indio date dog. Nearby there was a “deep fried snickers” sign competing for my gastronomical attention. Many years ago I had one. That fulfilled a lifetime of curiosity.

On the near horizon there is silhouetted the minaret and eastern roofs of Arabian architecture. It is actually a large and engaging set for the nightly musical pageant that has been playing in one version or another for nearly seventy years. There is wonderful stage equipment and feeling you aren’t in Indio anymore. I walk by three camels nearby that are there to give rides. Two were working while the third was lounging around on his belly. It looked like fun but my legs began to ache with the memory of an all night camel ride up an active volcano named Taftan that crowns the Sarhad, a southern desert of Iran where I once lived.

Earlier in the day these humped “ships of the desert” had been part of a camel race and that night they will be on stage in the pageant. In the distance I could see a whirling ride, one end of a giant pendulum with a long bench for about ten or twelve people. On the other end was a giant sign that stated “1001 Nacht.” The One Thousand and One Nights classic literature had greatly influenced the dreamers and fantasists in the 1940s. Still the Queen of the fair is called Scheherazade.

The Holy Lands are one other area where this affectation of Orientalism persists. The Shields Date Gardens have paths for walking through the date palms. Recently they obtained larger-than-life statues from a closed Bible garden illustrating the most famous events of Jesus Christ’s life. For the devout it is engaging; for the rest it is mere simulacra and a synthetic imitation of a universe far, far away and long, long ago.

Yet one cultural insensitivity often takes the place of another. What is it in human nature that attracts us to negative stereotypes of other cultures for mocking and animosity? Using sex to market dates has been done before, and it can be done again. It is a common strategy today in our culture. Health is another marketing game plan that is being used, although many are stumbled by something so sweet with natural sugars being healthy. The new marketing tactics for dates have yet to be tested, proved, and finalized.

Indio is now up and coming; in spite of dropping groundwater in some areas, it is straining to be a modern desert city. The date crop ranks at the top, making the area the date capital of the United States. Now the marketing strategy is health and nutrition rather than romantic fantasies.

Indio has developed a Mission Statement and built a strategic plan for the future: Self-study, goals, and objectives. The will to move ahead, with the money to do it, points to a very different future than a faux Arabian one for the town, and its companion towns on the Highway 10 corridor.

Steven Michael Price(non-registered)
This is an entrancing and useful look at a fast-disappearing art form. Thank you for documenting!
No comments posted.
Loading...
Subscribe
RSS
© Christopher Langley & Osceola Refetoff