High & Dry will survey the legacy of human enterprise in the California desert.

Together, writer/historian Christopher Langley and photographer Osceola Refetoff will document human activity, past and present, to inform decisions about future development. Our objective is to engage you with compelling images and stories of an extraordinary region we hold dear to our hearts.

For over a century, a pantheon of American painters, photographers and filmmakers have journeyed into the California desert to frame a mythology of the American West. More recently, both writers and photographers have depicted a lost desert Eden, irreparably disfigured by thoughtless exploitation.

The myth of California's deserts is charged with human hope and inextricably tied to that most American ambition: the pursuit of freedom and happiness. Iconic images of these arid lands are part our cultural DNA, essential to our collective understanding of the West and to our assumptions of what it means to be an American.

Against these grand ideals exists a loose patchwork of struggling communities, military-industrial compounds and vast open spaces; long a refuge for loners, dreamers, and broken spirits. In the near future, immense wind and solar projects will likely dominate many areas, transforming the landscape in ways that are complex and irreversible.

We welcome you on a journey of discovery, to reflect on the land use decisions of the past, and the choices that lie ahead. This land is our land, and its future will depend on our appreciation of its value today. Our hope is that you will find beauty not only in its spectacular vistas, but also the puzzling juxtapositions and remarkable narratives that embody this distinctly American landscape. 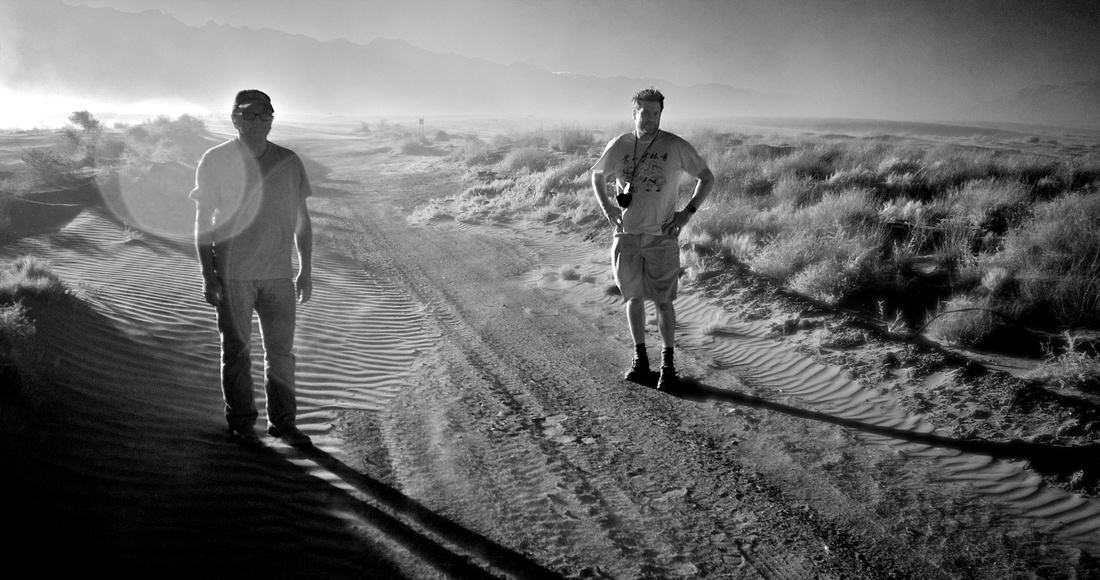 Author and photographer in a dust storm on the southeast edge of Owens Lake near Keeler, CA - 2013

Osceola Refetoff’s interest is in documenting humanity’s impact on the world – both the intersection of nature and industry, and the narratives of the people living at those crossroads. His images exist within traditional means – landscape, portraiture, travel, editorial – and are variously produced using film, digital, infrared, and pinhole exposures, according to what best expresses the character of his subjects. Thus, despite his documentarian impulses and the fact that his images deliberately depict quite ordinary, even mundane, subjects, he trains on them a hyper-realistic and nuanced vision, often yielding surreal, even dreamlike images. His process generally happens “in camera,” at the moment of capture, in a kind of alchemical reaction that transforms the external world into something both unchanged and extraordinary, realistic and magical.

Refetoff’s motion picture background informs his approach to constructing visual narratives. Most of his early artistic influences were from the world of cinema. His meticulous framing of compositions in depth, explorations of temporal as well as visual space, and creation of in-camera effects echo the great mise-en-scène directors Lang, Welles, Kubrick, and Melville. With an appreciation for the quirks and rebellions of technology that thwart photography's pretensions of authoritative objectivity, Refetoff shifts between stylistic modes of representation to build layered, multidimensional histories of architecture, landscape, and population. What links all the forms and aspects of his eclectic practice is a commitment to capture “what the picture requires,” using the many cameras he carries to render not only how a place looks, but how it feels to be there.

A native Chicagoan, Osceola is half Danish, half Bulgarian, and half Canadian. Refetoff holds as a B.A. in Film & Mass Communications from Duke University and an M.F.A. from New York University's Graduate Film Program, where he earned a Paulette Goddard Scholarship and the Warner Bros Fellowship Award. His art and editorial photography has been featured in Artillery, Arid, Boom, Palm Springs Life, Hemispheres, and WhiteHot magazines, among others, repeatedly earning the Outdoor Writers’ Association of California (OWAC) awards for Best Feature Photo, Best Nature Photo and Best Overall Photo. His work is widely exhibited, including at the San Diego Art Institute, the Palm Springs Art Museum, The Main Museum, Photo LA, Porch Gallery - Ojai, and numerous solo exhibitions covered in The Los Angeles Times, Huffington Post, CBS, LA Weekly, and other publications.

After growing up with East Coast woods, and studying in the pine forests at Dartmouth, my two Peace Corps years in the deserts of southeastern Iran awoke me to the empty beauty of arid lands. Before this I thought I could never live without forests. I have lived more than forty years with my wife in Lone Pine, California, a small community in the high desert.

Building a film history museum in Lone Pine, and serving as county film commissioner for almost ten years, I am focused on visually, culturally and historically understanding the desert landscape. I founded the Alabama Hills Stewardship Group to address the needs of a very special visual area in the desert where nearly 400 films have shot scenes. I write a bi-weekly column examining this subject of film and landscape in detail. These writings are becoming books. I have already published two books of historic photographs and text, one on my community and the other on nearby Mount Whitney. I update info about my writing and other endeavors on my website here.

My writing now focuses on the unique human story being written on the desert. The landscape narrates this story in its own special language. I am learning to read this message and transcribe it into words. The landscape is shaping us just as we are shaping the landscape. Our shared story needs to be told now.

Prints are manufactured in-house at Chungking Studio in Los Angeles Chinatown. Papers include Hahnemuhle Fine Art Museum Etching, Museo Silver Rag, and Moab Entrada Rag, and are selected based on tests to determine which material best suits the interpretation of each individual image. These museum-quality, 290-350 GSM-weight papers are exceptionally robust and render outstanding detail.

After a successful print is inspected and approved, a protective seal is applied using a three-coat process that increases moisture, dirt, fingerprint, and UV resistance; extending the already significant color-fastness of modern archival inks approximately 3x the length of untreated prints.

If you are interested in purchasing a print, please contact Osceola at info(at)ospix.com. Not all images are available in all sizes, as some have yet to be interpreted as prints, a process that usually takes three or four days.