MR. AND MRS. DATE PALM ARE MOVING TO THE COUNTRY 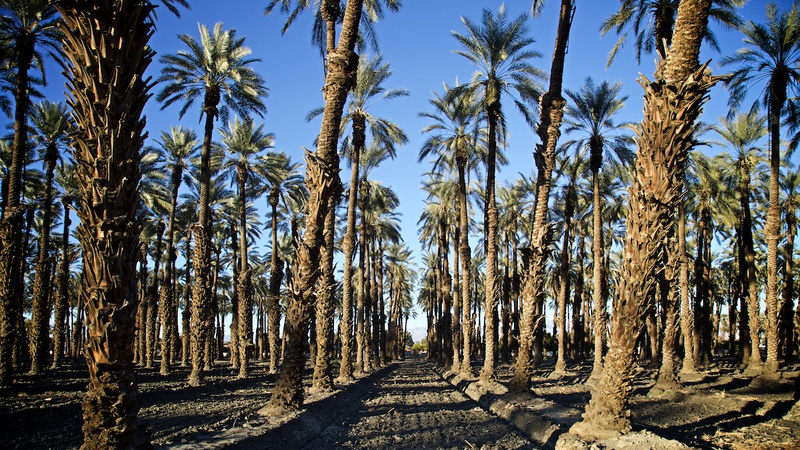 An old Arabic legend tells of the Date palm's creation: "After God had finished molding Man from Earth; He took the remaining material and shaped it into a date palm which he placed in the Garden of Paradise."

As we drive around the Coachella Valley towns of Indio, Thermal, Coachella, and even Mecca, we see full-grown, beautiful date palms being cut down, or pulled-out violently by the roots. I feel a terrible loss at seeing these stately, valuable trees being wantonly destroyed. The lots are cleared and then put up for sale.

Eventually the land will be filled with cookie-cutter homes. I ruminate on the fact that neither the date palms nor the homes are natural to this area. One might surmise this destruction spells the end of date agriculture in the area. 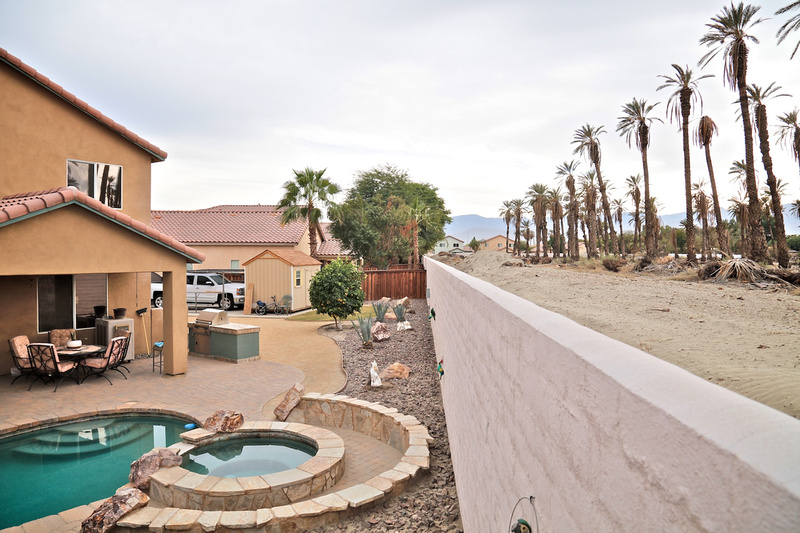 Are you kidding? It is the crop that makes Indio the date capital of the United States, producing 95% of American dates. Several factors are in play, but in actuality the date gardens are simply being relocated out of town. First, the land within the growing town is too valuable. Developing it for housing and business can make a profit. Second, as the trees grow older, their production drops off, and harvesting from the ever-higher crowns becomes more difficult, and thus more expensive and dangerous.

So Mr. and Mrs. Date Palm are moving out to the country where land is relatively cheaper and not likely to be developed any time soon. 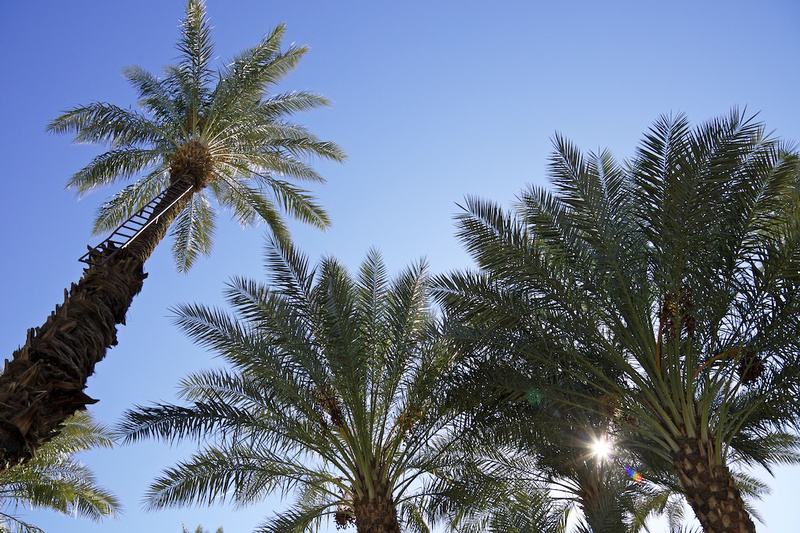 From the East Coast originally, I remember vividly when I saw my first palm tree. We were on a spring break road trip from college in winter bound New Hampshire to my roommate’s hometown of Sarasota. It was predawn and the palm was on the northern edge of Georgia, the burgeoning steel-blue light silhouetting its strange, prehistoric, scaly trunk and exotic fronds. Slightly crazy from driving all night, all I could think was dinosaurs will be next.

Dates are not native to the Coachella Valley. But as it turns out, the rare desert climate here is perfect for growing them. In 1898, the U.S. Department of Agriculture sent their “Agricultural Explorers” to travel the globe looking for new foods unknown in the West to grow back in the United States. The story of the Biblical date is one of the romantic visions coloring this crop in the Coachella Valley. The Shields Date Farm actually has a Biblical garden with stations-of-the-cross sculptures from Jesus’ life. 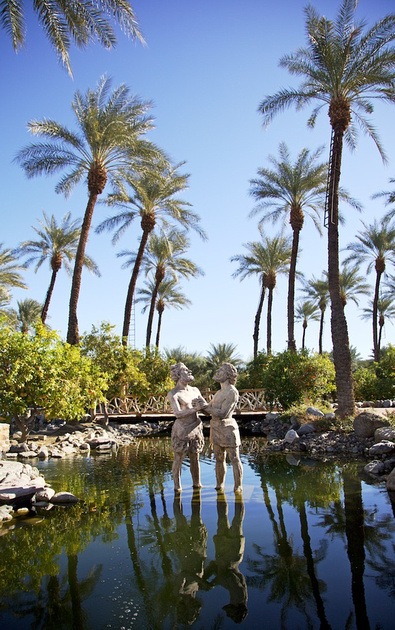 David Fairchild went to Bagdad to study date palms because of the seductive stories in One Thousand and One Arabian Nights. This book and the whole flavor of Arabian culture and romanticism were very popular at that time. Fairchild’s co-worker Walter Swingle went to Algeria and brought back several bundles of date palm offshoots. They flourished in the Coachella Valley climate. Fred Popenoe then sent his two sons Paul and Wilson around the world risking their lives. They stopped in Iraq for date palms. However, Paul nearly succumbed to typhoid fever in the tropical climate, and Wilson contracted malaria but survived.

Wilson reported that in the Red Sea, a lot of the precious cargo of date cuttings was lost in an ocean squall, threatening the entire mission. Short of drinking water for the crew, the ship’s captain was resistant to using any on the remaining offshoots. Wilson exchanged a new technological wonder at that time, his typewriter, with the captain for water. The plants survived the arduous journey.

Today all the date palms in the Coachella Valley are descended from these early gathering trips. 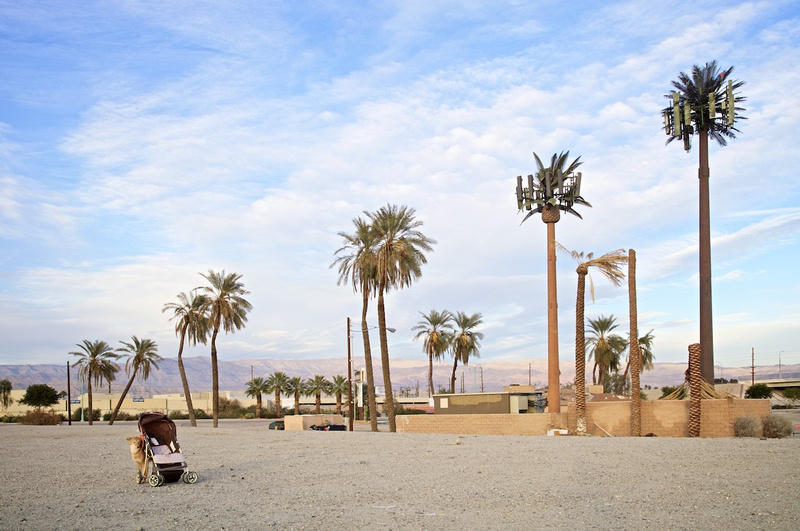 As we stand near the center of town, this evening the sun is a red, burning eye setting in the murky, dust-infused evening air. Osceola is struggling to create a photograph capturing the eleven palm trees standing in broken posture in an abandoned parking lot.

Palm trees are everywhere in the Coachella Valley, but it is Indio that most readily identifies with their reptilian solemnity. The ones we are studying for their aesthetic fatigue have an orphaned baby carriage, a one-person homeless camp, and other urban detritus all about them. The trees, some broken off and mere posts, are infused with elements of entropy, echoing timeless regrets in this harsh land. Sun-blasted gravel spreads at their feet. Their necks are bent in anthropomorphic tilt as if listening, waiting to hear something about their meaning. Is it just the traffic on the busy street nearby? Do date palms here in the Coachella Valley have ulterior or metaphysical significance beyond just an agricultural crop? They do have important allusive meaning, embedded in several major religious texts from Christianity, Judaism, and Islam.

These sacred writings are rife with symbolism, but here these trees seem to be commenting on whom we are, and what we have left behind that now defines us. Even the practice of growing date palms is idiosyncratic, labor-intensive, and nearly unparalleled. This process does limn human determination and tenacity.

Palm trees are not propagated from seeds in most cases. The palms are cultivated by harvesting the dozen offshoots around the lower trunk when the tree has reached full maturity. The offshoots are planted and watered and up to 80% survive and grow. 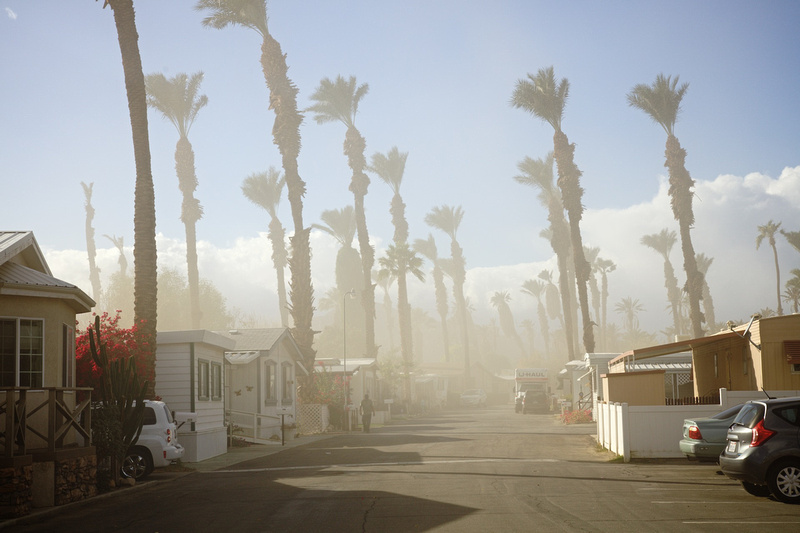 We see new palm gardens, often on the edge of town. I remember the violence their immediate ancestors have suffered and wondered if these trees will eventually have a violent end as well. After a few years they will start to flower. Date palms can take 4 to 8 years after planting before they will bear fruit, and 7 to 10 years to produce viable yields for commercial harvest.

Propagating dates is labor intensive and requires skilled workers called palmeros who also work in humidity and 120 plus degree heat at certain times of the year. They are often Mexican nationals, and because of their extra skills and the harsh working conditions are paid more than other farm laborers. These palmeros tie up the male flowers until they are dry and the pollen can be shaken out onto the female blossoms. This is done by hand, working high up in the boughs of the palms. 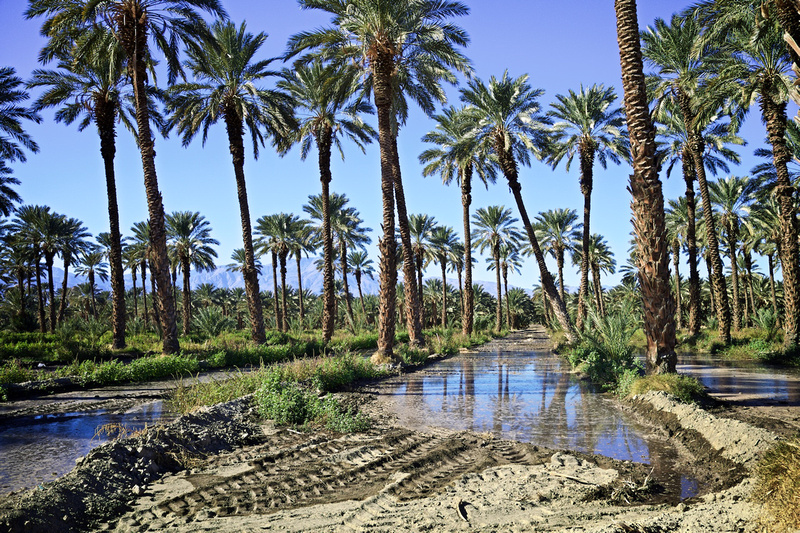 I stare up at the dagger-like spines that are ready at a moment’s notice to tear into human flesh, eviscerating the farmer’s arteries from his forearms. During the first few months of the year, the palmeros take very sharp curved knives and cut off the stiff sharp thorns.

While there are several types of dates, in the Coachella Valley most dates are of Deglet Noor variety. It is a semisoft date, with firm flesh and a color range from light red to amber. Blonde and brunette dates were developed by and sold exclusively at the Shields Date Farm in Indio. Mr. E. Floyd Shields was an authority on the life of the date and how to promote interest and tourism and as he proves in his original film with the provocative title, “Coachella Valley Desert Trails: The Salton Sea Saga and the Romance and Sex Life of the Date.” 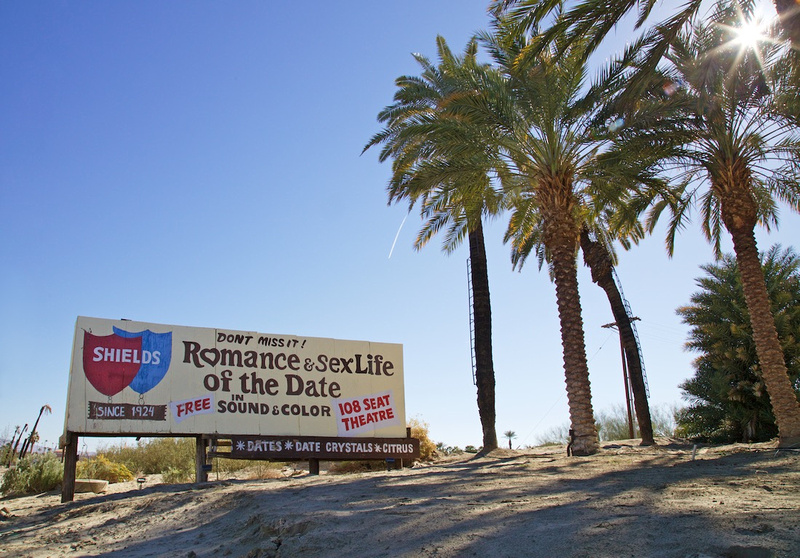 These dates came all the way from the Middle East originally; now their new restlessness has resulted in a much shorter trip. The culture of the date is a conundrum of contradictions.

The process of growing date palms and harvesting dates is still labor intensive. The process combines ancient ways with modern technology. Often people who are fans of dates are fans of the famous date shake. Sweet to the point of cloying, still it is popular with the tourists who visit the area, as long as they are not on a diet or diabetic. I am not a fan of the shake but love dates used in main dishes and baked goods. This crop is unique, rare, difficult, and yet lucrative when handled professionally. It has marked, molded, and shaped Indio and the Coachella Valley since propagation there beginning more than a century ago. You’ll know that almost as soon as you arrive. 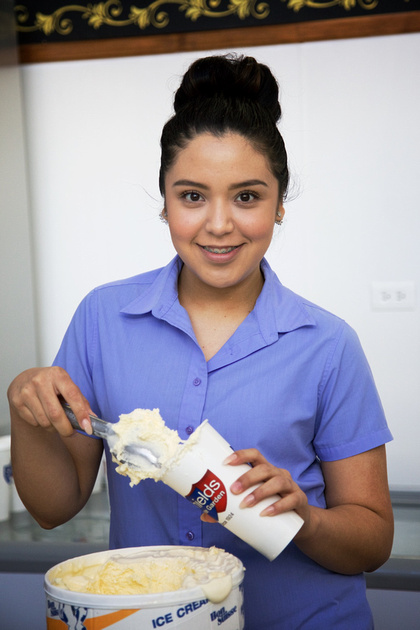 By the way, before you go out to explore any of the shady, cool palm gardens of Indio, or even the new ones, put on tough calf-high boots. Rattlesnakes are also attracted to the tepid temperatures and don’t take kindly to being stepped on. 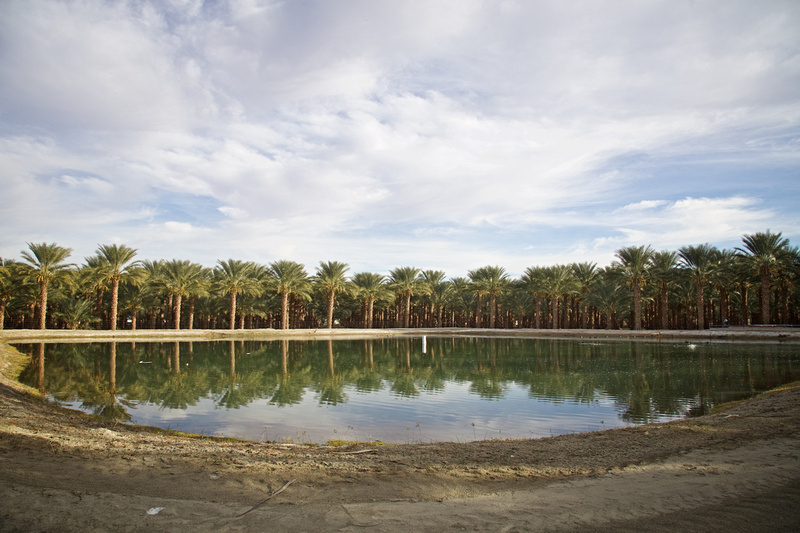 jeng(non-registered)
It's sad to know that they are cutting those old palm trees because dates are my favorite snack and I especially love the best Medjool dates in California @ https://coachellasbestdates.com/pages/our-dates because they're fresh and in top quality.
Catherine Hickey(non-registered)
You kinda cut short on the growing of a date palm tree and the pollination from the the male trees blossom to the female trees bloom. i.e. the juvenile tree grows as an offshoot from the base of the female until it reaches about 5yrs old..then is cut from said base and replanted where in another 5yrs or more it will start to produce dates..these are not edible..not for another 5+yrs will the offshoot reach maturity and then can be pollinated and produce a date worth harvesting. So..when my grandfather, Eugene L. Jarvis came with his wife and children to the valley in 1918 to settle on Airport blvd in Thermal and he planted his offshoots..he had another 10yrs before he had a product worth harvesting and sending to the packing shed to be shipped off to market. Those trees grew tall..70-80ft..and were still producing high grade deglet noor dates up until 1999 when I left the home ranch and moved to Oregon. The majestic old ladies have been ripped away..to make room for some yuppies huge house at the back end of the 40 acres..all that remains is the home grandfather built at the front of the ranch and my memories
Catherine Ruane(non-registered)
My childhood is infused with date palms in Indio and even in my grandmother's back yard in the Imperial Valley. The experience of childhood includes very hot afternoons with voluptuous crops growing from oranges to tomatoes, sugar beets, melons and yes, dates. To see these old fields and groves replaced by a staccato of housing developments with ticky tacky yards and no trees is very sad for me. My history is being erased. Those tall old date trees represented the sweet shade of a community of farm people tending their land and raising their families. My family knew their families and we all regarded the place as home. There is a mysterious connectedness in this experience. When the land is changed and the farms are gone there is no there, there anymore.
No comments posted.
Loading...
Subscribe
RSS
© Christopher Langley & Osceola Refetoff