OF MIRACLES AND BURNING PALMS: THE GREAT FIRE OF THERMAL, CA 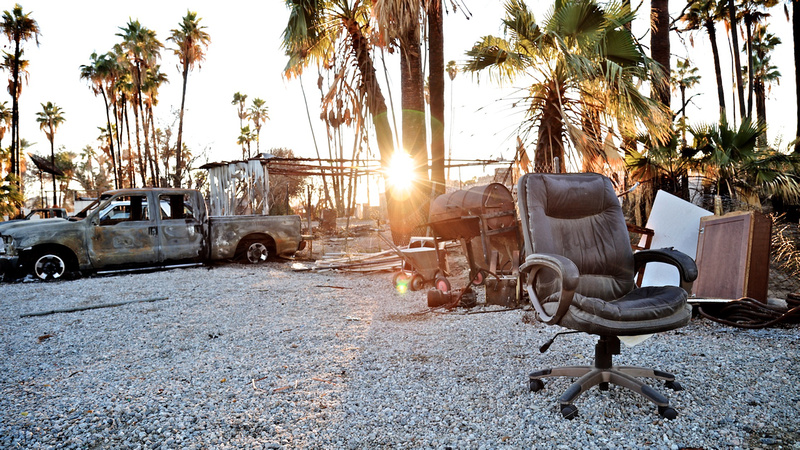 “All things are possible, if only you believe.”
– Gospel song sung by Elvis Presley and others

The rumor went around that the fire in the fan palm grove belonging to the Jesus Is Salvation Church began with a lightning strike. Pastor Ruben Martinez tells me it may have been an electrical short in a work shed on the property. So the fire wasn’t caused by a vengeful God from the Old Testament to punish the unfaithful. On the contrary, evidence suggests that it was the faithful.

The scene is apocalyptic with the rooms, walls, and floors of the burned house intact. As Osceola goes through his normal contortions of composition, I struggle to understand the architectural design of one of the destroyed buildings. Fire ruins take on a desultory, chaotic impression. Melted and twisted steel, Daliesque chairs and furniture, blackened-face tile, and now useless intention obscure their utility of structure. 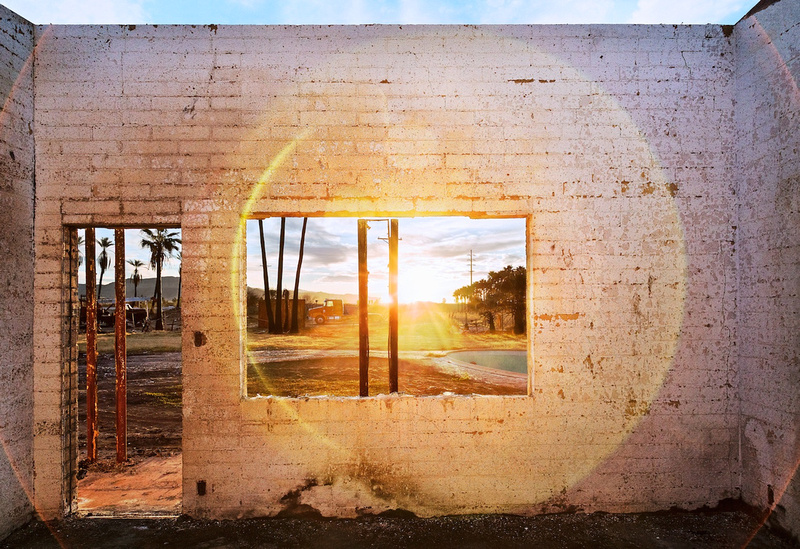 The palms are now green on top; the other trees remain dead except for a few oleanders that line the road. 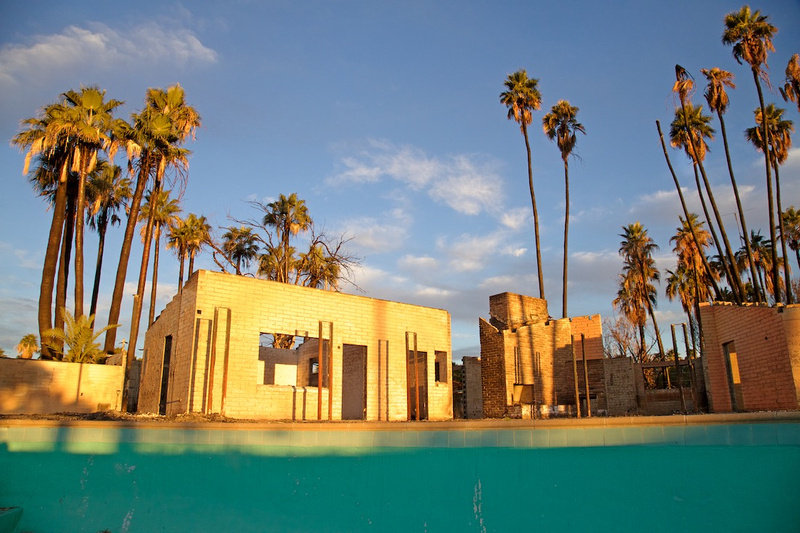 Talking with Pastor Ruben, he made the origin of the fire as being mundane not supernatural very clear. He also explained that he bought the property with the palms to make a value of 20 million dollars needed to build a new house of worship.

As I walk through the grove of fan palms (Washingtonians), there is a stately beauty about the planting. These are mature trees. The fire has burned off most of the detritus that palm trees accumulate. Now instead of the rough outer covering of the trunks, they are smooth, tessellated with fire-caused soot intensifying the contrast on the surface. This will probably disappear with time and the palm trees will be returned to health and salability. 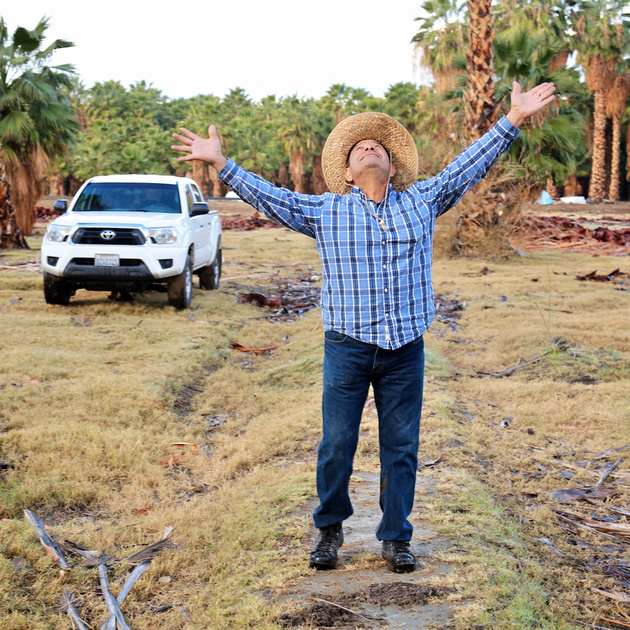 Cal-Fire Captain Lucas Spelman said at the time of the fire, “It’s dry out there, the trees got less water this year. The palm trees are dry and they’re carrying the fire.” It had been first reported as half an acre but spread quickly in the record 119 degree heat. One nearby neighbor, Francisca Berdugo, stated, “I see a big mushroom in the sky and flames.” Eventually roads in the area of Grapefruit Boulevard and Avenue 58 were affected and traffic was diverted.

Pastor Ruben meets me at the site. The initial evaluation determined that the trees were gone and his church suffered a loss of $4 to $5 million. Now there is peace in the grove, the birds are happily chirping, and all is right with the world. The palm grove is full of life. At first Pastor Ruben is reticent, evaluating my motivations. He does tell me his story with calm yet steadfast enthusiasm. 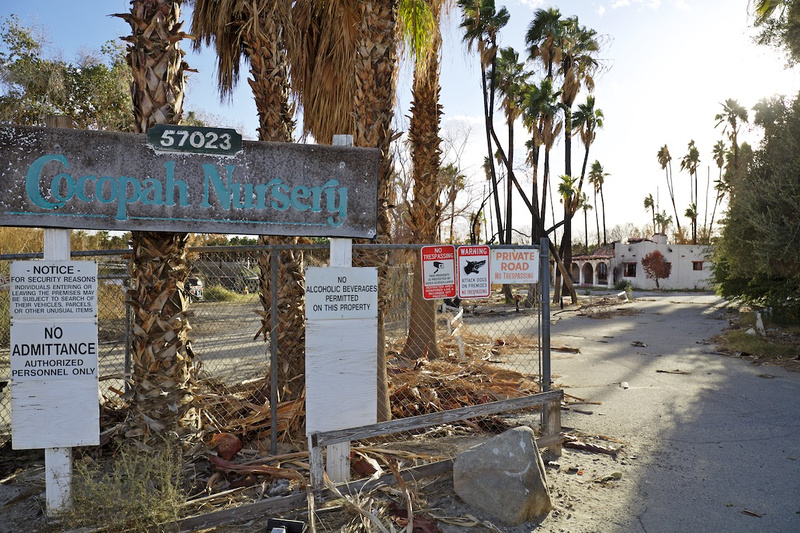 He and his wife Margarita are the senior and founding pastors. They have been married more than 40 years. In 1985 his mother was dying of tuberculosis and the doctors were unable to heal her. He got down on his knees in the restroom and prayed, promising God that if he saved her, he would follow him and his teachings the rest of his life. His mother lived another twenty years.

Pastor Ruben has been a child actor in movies, business owner, auto mechanic, and investor. He is now retired, working full-time for the Lord. He and his wife were moved to start the Jesus Is Salvation Church in 1996. It started small but now has a building on Harrison Street in Thermal, and also another site. Ruben dreams of a big, new church. 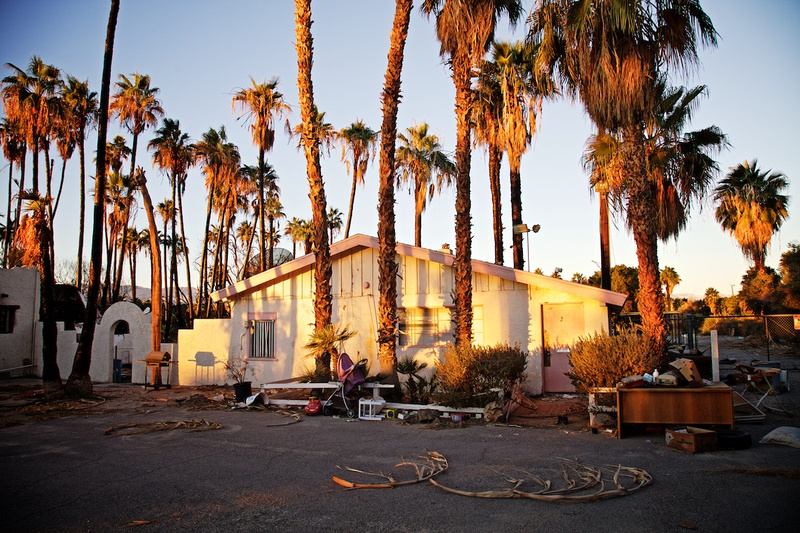 “We bought this with a purpose to sell the palm trees and make over $25 million to build our new church on Church Street here. And now these trees were gone, and you can’t insure palm trees. Usually when crisis comes in, that’s when we pray to God and we see the glory of God manifest and he’ll calm the storm.”

Pastor Ruben prayed and had his congregation most strong in their faith pray. The palm trees were assumed dead, but the pastor had them watered anyway even though the farmer watering them said it was hopeless and a waste of water. The decision to water was an act of faith in itself. Palm trees are watered through flood irrigation, although drip irrigation is coming into fashion. The palm trees are now obviously coming back, while most of the other trees on the property remain dead. 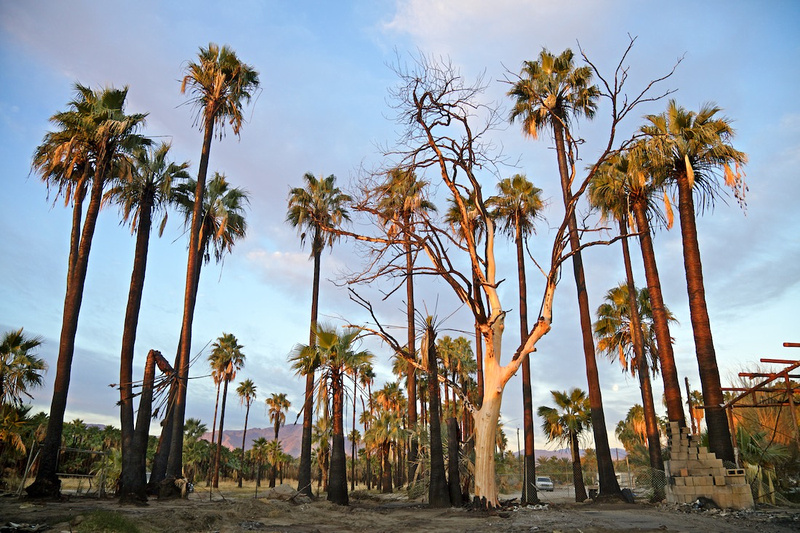 Pastor Ruben says his church will cling to its faith and find a way to rebuild or more exactly build. The property also had two other single-family homes, both of which belonged to the church. The residents were provided with shelter, food, and clothing.  On the church website the Pastor posted, “All of us at Christ Is Salvation Christian Church thank everyone for their thoughts and prayers as we continue to assess the damage from the fire at our palm nursery in Thermal. The church continues to provide clothing and rooms for those families displaced by fire.”

“We especially thank all the Cal-Forestry fire fighters, Riverside County Sheriff deputies, Riverside County Hazmat, the Red Cross, and other organizations who have provided round the clock protection, provisions and updates. We pray in Jesus’ name for speedy and full recovery for those precious servants of Cal-Fire who suffered injury during the fires.” 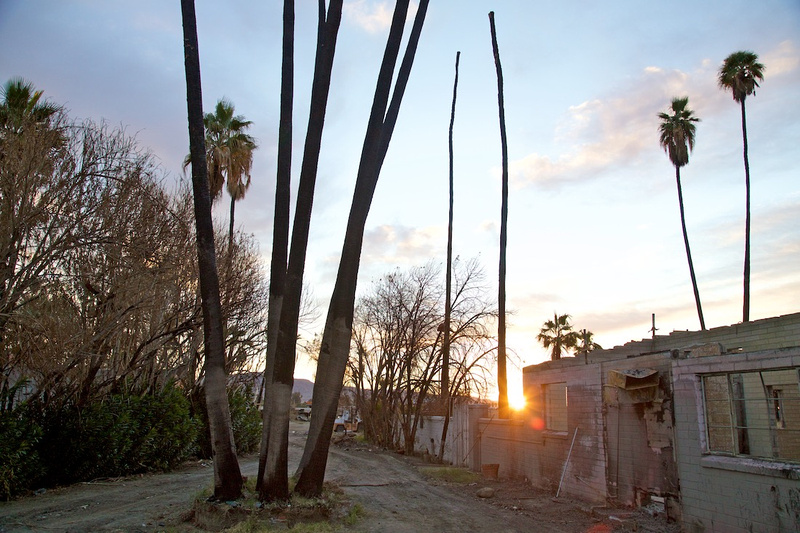 It is a simple story. The suspicious, cynical, or pragmatic will say that the palms would have come back, like the oleanders, from their roots. It didn’t take prayer or faith, but nature’s resilience. The faithful will testify that it was God’s steadfast love.

Standing at the edge of the scorched palm grove, the belief of this man and those he pastors have certainly empowered their wills to act, to keep the faith, and to make it through another day as the trees recover. One thing is certain: I am assured by the faithful that the new church will get built. 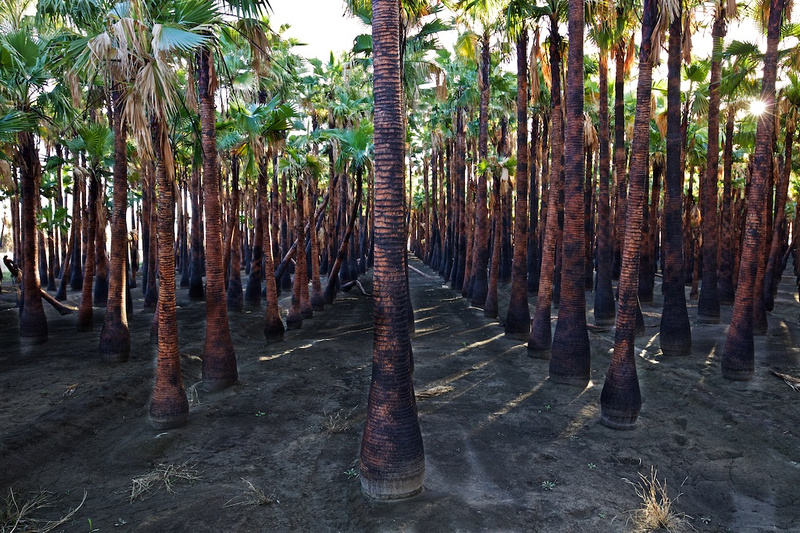 THERMAL resident(non-registered)
Pastor Rueben is a liar and a fraud. It's true that CISC (Christ is Salvation Church) does alot to help their members and the community, I can personally attest to the fact that they help themselves first! The burned out ranch was packed to the rafters with DONATED goods from all over. Designer clothing, colognes, toiletries, household goods...you name it! They'd rather hoard it than give it away though that's what it was donated for... Distribution to the public!

Even when it comes to their so called "Food Ministry", they don't distribute the food when it comes in. First, it gets cherry picked by the who's who of the congregation who "volunteer" in the food bank. They stock their vehicles greedily, especially when they've got donations of sodas, chips, candy, prime choice meats etc.

Not only this, but there are many MANY CURRENT DRUG USERS who have regular access to the storehouses and who spend a great deal of energy siphoning off and fencing (selling) valuables from the aforementioned storehouses inckuding those at the ranch where the fire took place. All the while, turning others away empty handed who had gone to the church for help in a time of great need. By the way, its a highky believed rumor in the streets that the fire was intentionally set!! Whats worse is the entire community is aware of it. It's the worst kept secret in Thermal.

They even had plans to put two of the biggest drug users in the area IN CHaRGE OF TWO DRUG REHAB HOUSES (one for women, one for men) thankfully that plan never came to fruition.

Now the newest scam is to build a new playground... Let ne tell you that the money wasraised LAST year for the playground and they tore out the one that was already in place replacing it with ought but grass and a brand new parking lot!! Where all the money went ?? Yours is as good a guess as mine! All I know is that the work that was done wasn't what was supposed to be done and it was done by volunteer labor...so wheres all the money and WHY are they fundraising AGAIN? And why are they GIVING AWY THOUSANDS of dollars when theyre trying to RAISE MONEY? Does that ake sense???

I suggest digging deeper, because theres much much more to the story than meets the eye!!!!!

They even have had sales which is ulkegal and coukd cost them their licencing!!

Having said all this, its not all bad... Tge church is a beacon of help to many in the community and there are many who depend on food donations as their only souce of sustenance. They give oresents every christmas (though not close to a 1/4 of what they were donated!!!!!!

It's a real shame because if managed properly and fairly theres no telling the amount of food that could be done... We may never know until someone really looks into things!!!!!!!!!

Karl Young(non-registered)
Another great dispatch guys - as always I love the way that both the photographs and text sit at the intersection of multiple views, in this case maybe Picassoesque as well as Daliesque. And I was fascinated to hear that Pastor Martinez had expected to make 25 million from his palms; I didn't realize that there was a business in palms other than dates (though I guess that wouldn't be Washingtonia).

In any case good luck to Pastor Martinez and his flock. Interesting that this story has actually sort of strengthened me in my recently adopted point of view (for those who care it's called ananthropocentric purposivism (AP), i.e. a cosmic purpose for which we humans aren't particularly important - I've been reading a great book by philosopher Tim Mulgan entitled "Purpose in the Universe" in which he fairly and compellingly lays out the strengths and weaknesses of the arguments for atheistic materialism, benevolent theism, and his offering AP).
No comments posted.
Loading...
Subscribe
RSS
© Christopher Langley & Osceola Refetoff