THE SALTON SEA - PART 3: THERE’S LITTLE “THERE” THERE IN BRAWLEY ANY MORE

The smell of smoke still lingers in areas of downtown as a reminder to local merchants of the emotional and physical healing process still underway following a rash of structure fires months earlier.   “It has really devastated Brawley,” American Beauty Academy owner Jeannie Jongeward said. “It’s going to take a long time if Brawley ever will be able to recoup from it.” 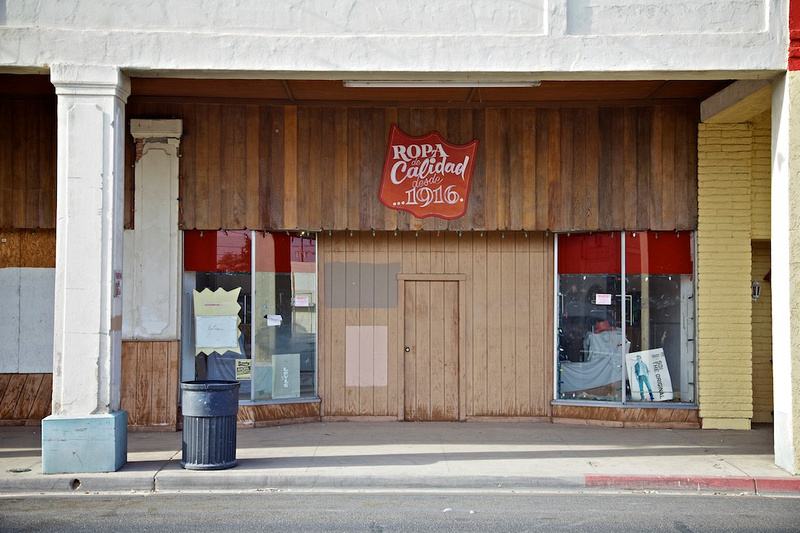 The road curves around the Salton Sea, now hidden in the dark. A powerful locomotive rumbles nearby, paralleling the nearly empty highway. The engine is dragging an endless line of flatbed cars loaded with containers. This is a major shipping route going east and west.

Towards the horizon, a thermal plant steals heat from the molten core of the planet. It turns it to steam to turn the turbines. A plume of escaping vapor is illuminated like a ghost caught by a paranormal investigator’s camera. It is “free” energy. There are nearly 80 generating plants in the area suckled to the earth's cracks that ooze heat. In the night they are illuminated cities that promise excitement and nightlife. They deliver only rumble and steam clouds and the turning of cylinders to agitate electrons.

The Salton Sea lurks in the dark: moist, poisoned and yet ever fecund at its edges. Much grows and much dies here. Everyone but the locals focus on the bad news.

Nyland goes by, then Calipatria but all is silent in the darkness. The Brawley Inn appears. Large truck-tired drivers have already de-cabbed for the night, but one motel room remains. There is a wet chemical smell in the wind. The air is fetid; life’s excretions are layered with decay and salt.

When the morning dawns, the air is still, pastel beautiful, with a gentle wind’s caress. By afternoon the landscape is one hundred degrees, heat exhausted and wind weary but still seductive. Main Street Brawley is obsessed with the past. Both Main Street and the side streets are lined by colonnades with a Spanish memory; sidewalks are edged by tropical plants like banana, bougainvillea and birds of paradise. 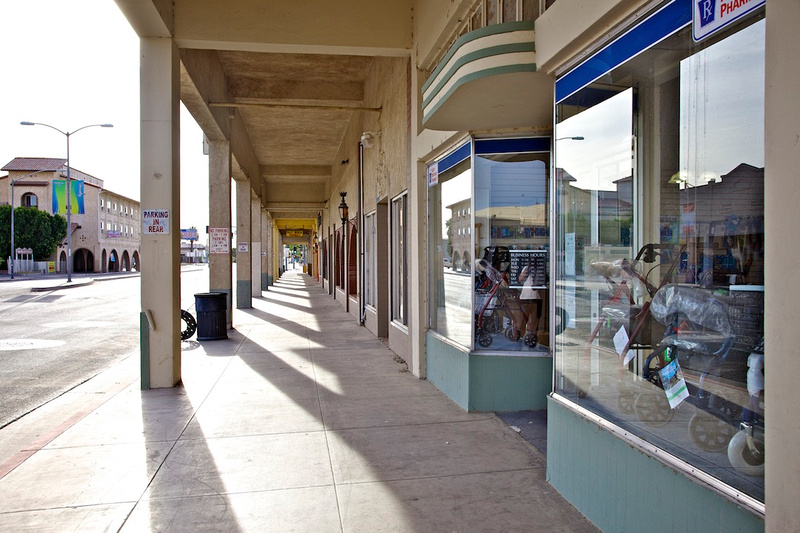 The historic bustle of shopping groups have been silenced. Everyone now owns a car. Avid consumers drive out to the strip malls. Once there were women in rebozos carrying parasols to avoid the sharp-edged sun rays, children in hand, out to meet other similar women for a chat.

The White Cross Pharmacy has Edward Hopper windows with white plaster and cream color stucco. The windows are full of walkers, rollators, potty chairs and crutches. Is the town full of failing elders? The sky is full of wispy waves and mares’ tails, and towards the sea to the west milky skies prevail.

Once this town knew exactly what it was, but now it engages in a desultory search for any identity that passes by. A man comes down the street. He is slightly overweight dressed in T-shirt and jeans. As he moves cautiously along, he puts a garbage can top back in place, picks up pieces of litter, and looks at the blackened walls of a fire ruined building and dreams. This is his town. He was born in Brawley, went to school here, but dropped out. He alludes to a run-in with the law, but goes no further to explain. 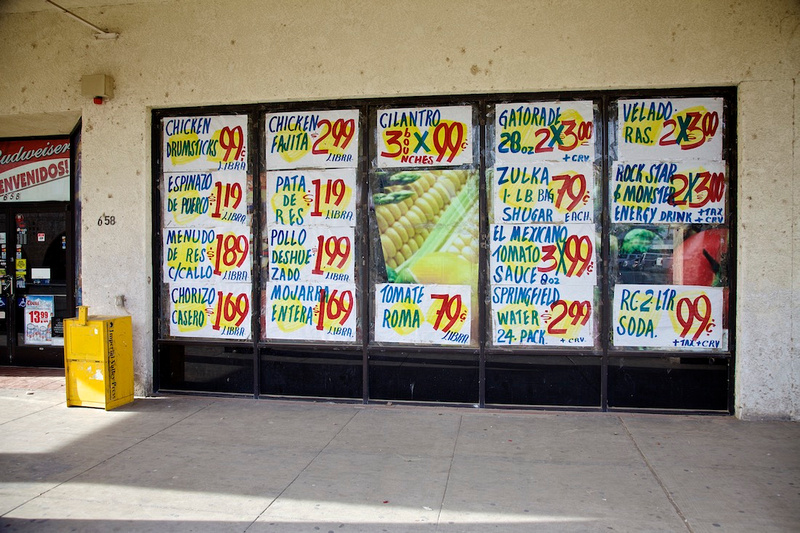 Off to New Mexico, he gets his life together, has two children, but things fall apart again. He returns to Brawley. His mother and brother die in car wreck down by the river. His grief still flickers across his eyes and lips.

Questioned, he says things are not that good but thinks they will get better. He points to the burned buildings where once a cosmetology academy did business. Smoke damage has marred the other businesses nearby. On either side of the Valley Medical Pharmacy there is a boarded up business. The street scene smiles like a meth addict missing teeth. The front of the pharmacy is particleboard. False brick paneling has been nailed to the plywood front, a cheap Fifties knock off. Farmacia Del Puebla is down the street. Across from there are the Cuindad Plaza Adult Apartments.

The man emulates optimism and says he will be getting a business going here, but never explains what that will be. He looks over at Christine’s Restaurant. A banner “Mexican and Seafood: Orders to Go” drapes the front. It is newly rehabbed and painted ochre with a green stripe. A rich brown color outlines the windows and doorframe. Next door an H & R Block office services humble taxpayers. In our egalitarian democracy even the poor get to pay income taxes. 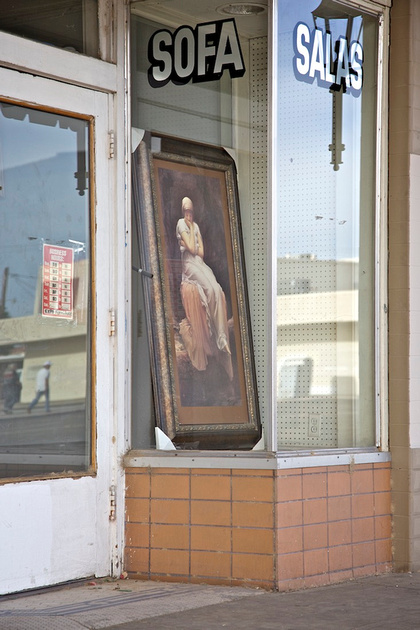 The man pauses in his meanderings down the street to talk general business outlook. “There are no jobs,” he emphatically reports. He discounts gold mining at Glammis, and the thermal plants, and the sugar factory, which he thinks is about to close. When queried about the huge agricultural fields, he sullenly reports that there are many farm jobs if someone would stoop to do that kind of work.

Yet, he thinks things will turn around soon. The tenacious people of Brawley and the Salton Sea have not given up. They do not want your pity or sympathy. This is home. They will stick it out, wait and, if they are lucky, work. To paraphrase Gertrude Stein of Oakland, there is no there there,* but that’s still plenty for these people. 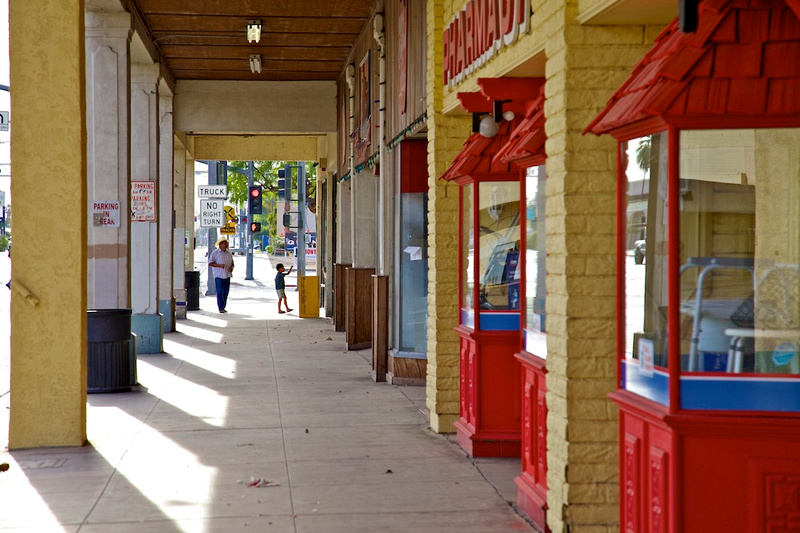 *Author’s Note on Gertrude Stein and “No There There.” When Stein returned to her hometown of Oakland in 1935, nearly 45 years after she lived there, she could not find any of the places of her girlhood memories. Her childhood home and all the places around it were significantly different from her memories. She had grown up in a rural area of orchards and farms. Now it was urbanized. So when she wrote in Everybody’s Autobiography about there being “no there there,” she was not putting Oakland down. She was reflecting that nothing she remembered was still there. It was the painful nostalgia of loss that she was remarking. You truly can’t go home again.

There is a newly coined, semi-scientific word for that emotional feeling of loss associated with environmental change. It is called “solastalgia.”

Hostgator Coupon Code(non-registered)
I want to read your THE SALTON SEA - PART 4, can you post it?
jacob(non-registered)
Wow!! Great post. Thank you for sharing this information. You have well explained the place with beautiful pictures. I am glad that I have found your blog
No comments posted.
Loading...
Subscribe
RSS
© Christopher Langley & Osceola Refetoff