THE SALTON SEA - PART 2: A TSUNAMI OF NEGLECT 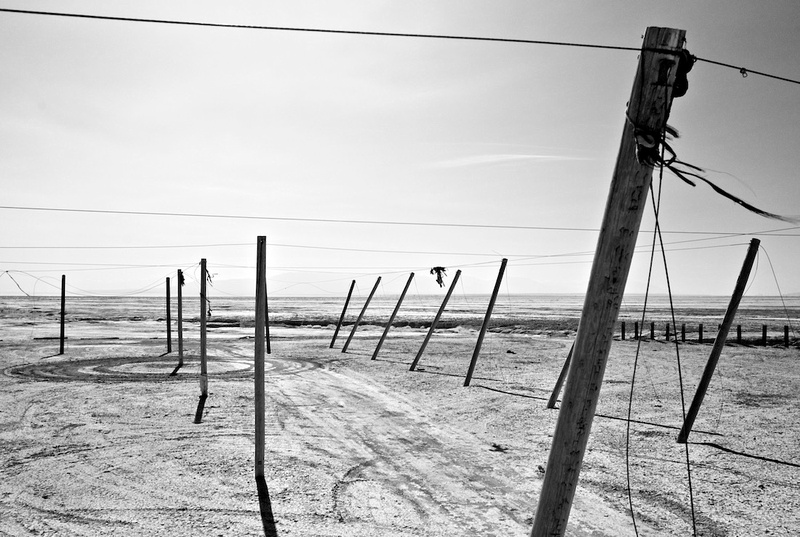 It seems, in fact, that the more advanced a society is, the greater will be its interest in ruined things, for it will see in them a redemptively sobering reminder of the fragility of its own achievements. Ruins pose a direct challenge to our concern with power and rank, with bustle and fame. They puncture the inflated folly of our exhaustive and frenetic pursuit of wealth.

― Alain de Botton, The Pleasures and Sorrows of Work

Two ruins of the Salton Sea area still haunt my memories. One is plain and simple, easy to understand. The other is strange and mysterious. That one is something left over from an unknown use from a time not long ago.

The Red Hill Marina has a careless seashore. The tentative wind and desultory tide spring to action according to the winds. It is early morning and the light is still lemon meringue smooth. It is not for long though for the dawn chill is fast evaporating in the onrush of another one hundred degree day. 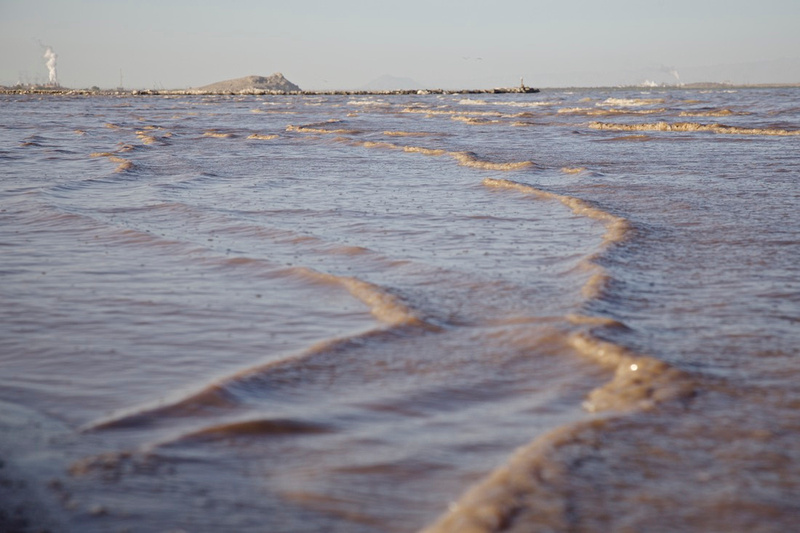 The photographer is out on the spit trying to capture upbeat images for an editorial piece. The land is littered with the detritus of neglect. I am standing on small dunes with gyres of water, flat, serene but slowly starting to turn. Bird noises announce the first feeding is well underway. In the distance a thermal power plant releases a pronounced plume of steam rising straight up. A very distant rumble of machinery can just be heard. A few waves lap on a temporary bank further out towards the sea.

As I walk along I am reminded of bathtub rings as if a tide had left debris and retreated back to its lair. There is a smell: both chemical and as if a loaded cattle truck had just passed by. Plaited reeds and sticks are frosted with ochre silt and salt. Dead plastic bottles, bent and dented, their surfaces opaque with the same powdery residue, lie abandoned by a tsunami of neglect.

We go to an abandoned trailer on a bank above the shifting sand, the snow of this inland sea. Curving linear ridges with ripples and twists provide landscaping where once there may have been a driveway. Jagged rocks stick through the salt and clay surfaces that sit silent, frozen at the edge of the water.

Large clouds of pulverized dust are rising from the other shore, powered by growing thermals. This is a Salton Sea dust storm!

The trailer he wants to capture is old with rusted edges and pink, pasty, sun bleached surfaces. Where there once was a window that framed the view of the sea, now there is weathered plywood. Plexi-glass is dusted and burned to filmy opaqueness. A wave of passing time has swept this domestic scene up and left it to slowly decay while staring blindly at the landscape before it. Time is not fast. There is a great relief in that. Things will continue to change, but quite slowly. All is as it should be.

The second ruin tickles the mind’s eye with patterns of leaning logs, missing shade netting clinging in rags to drooping cables, and a giant empty pit. What is this location? What service did it provide? Whatever the answer, it is for sale. The realtor will know what he is selling. At the entrance off of Highway 111 there is a sign with a red box at the top announcing “FOR SALE” in white letters. Below on a white background is the name “PAT SEAY” and the number 760 562-1436. The sign is somewhat weathered. I make the call. After many rings, there is a recording that basically says to leave a message. Somehow it felt like the phone was ringing in an empty office where the machine is seldom checked. I never hear back. 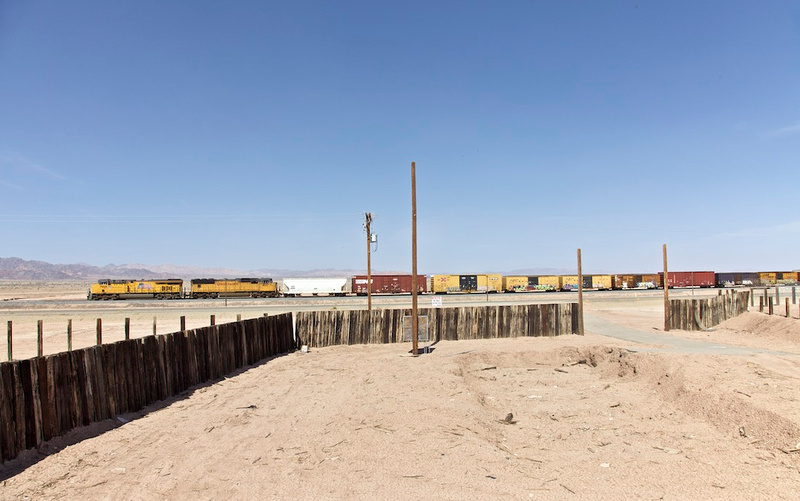 The location is raised on sand berms visible from a ways off. The ruin is made up of several major elements. As you enter you first follow a raised dirt road that takes you in a gentle curve to an eight-foot high wood fence. It faces toward the Sea. The wood appears to be treated with creosote and could be railroad ties. There is a two-segment box that appears to be either a chicken coop or rabbit hutch. If you stand on the roof you can boost your self up and thus get a better view. To the west are rows of leaning poles. The first row of poles lean towards the fence. To the north a row of wood poles leans north, and to the south a row likewise leans south.

Cables dangle from the tops of each pole, and tatters of netting, perhaps for shade, dangle down. Additional cables connect to the other poles. A set of short poles, perhaps fence posts, line straight across the flat salt playas. A dirt road leads through to very tall poles, around the outside of the pole array and into the next section.

The road is narrow, and raised and continues around a large pit that is more than fifty feet deep in the middle. The pit is rectangular, with slanted sides to a narrower bottom. This flat area has the same shape as the pit’s upper edge. The pit seems like it must have once been for holding water or liquid. If you continue around the pit it eventually leads back to the fence. Then you could exit. So the major elements are a high solid fence of creosote treated planks, an array of tilted poles that at one time may have held a shade canopy, and a large rectangular dirt pit.

With late afternoon shadows, the whole ruin with the various rhythmic patterns of poles, planks and cables, not to mention the graveled pit, fascinates the eye and tricks the brain into seeing meaning and purpose where none exists. 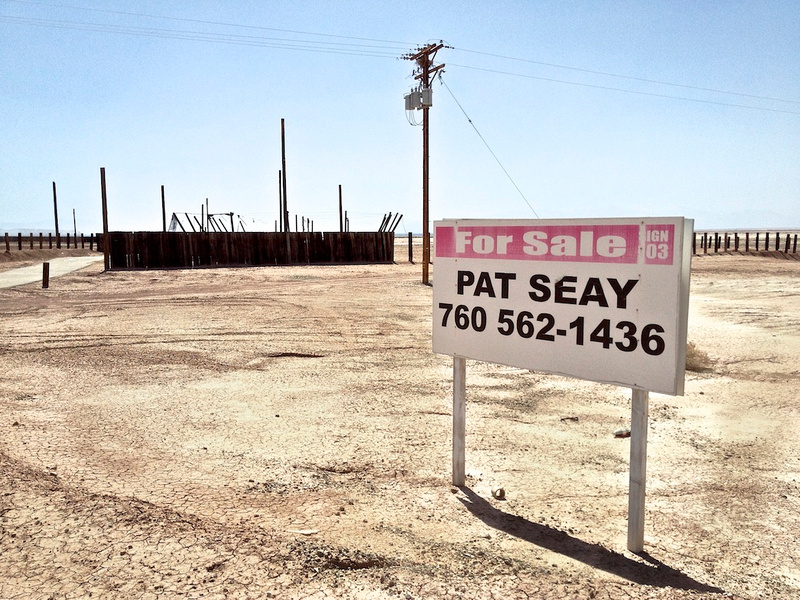 The desert has many mysterious ruins that cry for explanation and pity. There were forsaken dreams here in these ruins as the previous owners walked away. There are now only unknown dead dreams, and bitter disappointment.

The Salton Sea, the Colorado Desert, in fact, all the deserts of California are full of questions. What happened here? What economic forces created these artifacts, then abandoned them to ruin? Most importantly, what do these things mean for those who love the desert today? 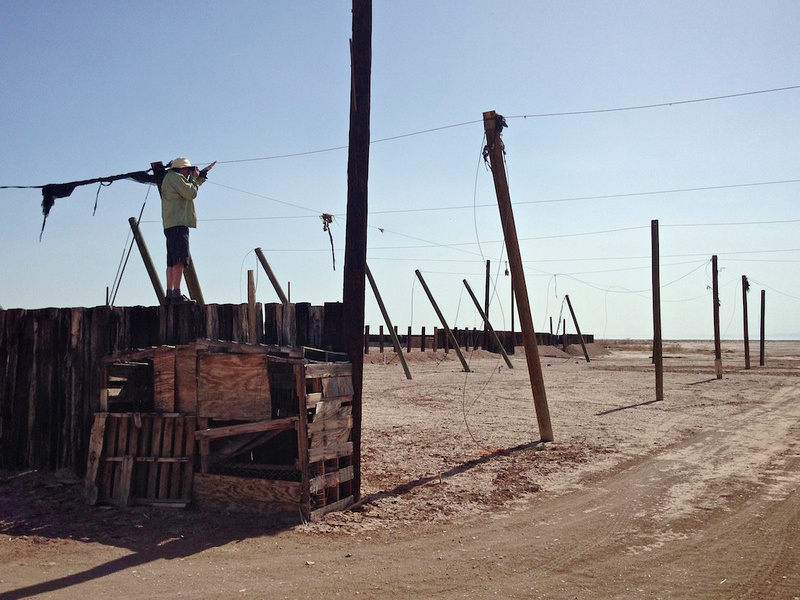