THE SALTON SEA - PART 1: A DISTILLATION THE WEST’S PROBLEMS IN SEARCH OF SOLUTIONS

It is at best a rather cheerless object, beautiful in a pale, placid way, but the beauty is like that of the mirage, the placidity that of stagnation and death. Charm of color it has, but none of sentiment; mystery, but not romance. Loneliness has its own attraction and it is a deep one; but this is not so much loneliness as abandonment, not a solitude sacred but a solitude shunned. Even the gulls that drift and flicker over it seem to have a spectral air, like bird ghosts banished from the wholesome ocean.

The Salton sink in California’s Imperial Valley is a giant geological laboratory retort into which most of the problems challenging the West have been distilled. Now residents, officials, and scientists work to find the right combination of chemicals, strategies, apparatus, and protocols to identify workable solutions.

It is fashionable for journalists to write of the Salton Sea and nearby communities in post-apocalyptic terms. While not inappropriate, this is only half the story. The area, as it struggles with water problems, the border, chemical and air pollution, Native water rights, geothermal green energy repercussions, pesticide toxicity, unskilled labor force, climate change, and exploitive development, is mirroring California and the West’s growing trials as they confront the future. It is a depressing landscape, yet seen from a neutral perspective, aesthetically beautiful in varied ways. It sets the bar high in search for human solutions to mostly human-caused problems.

We come to the Salton Sea knowing its history of too much and too little water. Ancient Cahuilla Lake left bathtub rings high up on the cliffs at Travertine Point. It filled and drained over the eons as the Colorado River wobbled and changed course, creating a complex delta of ever changing braided waterways without access to the sea. 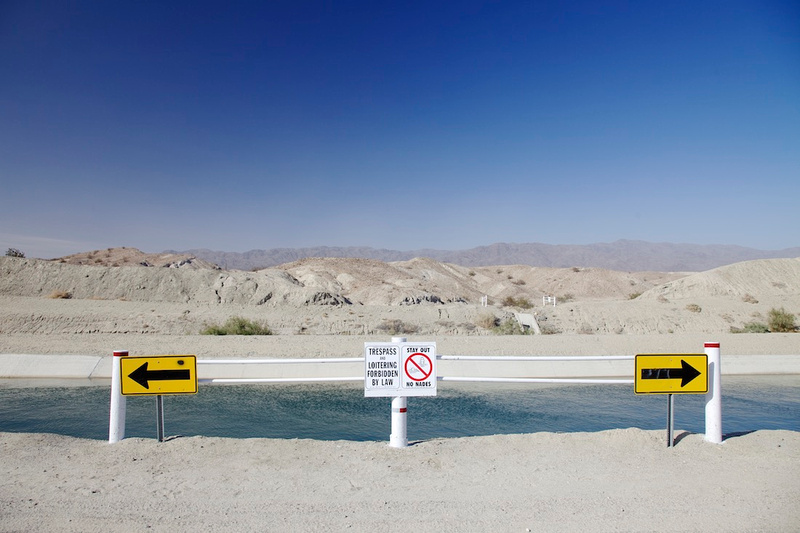 We stand at the edge of the Coachella Canal, watching the aqua blue water from the river, now encased in a cement jacket, placidly make its way across the desert land of Imperial County. The startling blue water channel, full of promise for irrigation, snakes majestically around the brown hills. Yet water has been overpromised to the various areas whose metaphoric lips are draining this beautiful source to quench a growing thirst.

Pacific Institute’s September 2014 report Hazard’s Toll: The Costs of Inaction at the Salton Sea summarizes the future of water here. In the years ahead, the amount of water flowing into the lake will decrease by about 40%. The surface will drop by twenty feet and its volume will decrease by more than 60%. The lake’s salinity will triple. The shrinking lake will expose 100 square miles of dust-generating lake bottom to the region’s blowing winds, worsening the already poor air quality in the region.

Each day as we travel back and forth on Highway 111, we pass through an inspection point run by the immigration system, checking for undocumented aliens. We do not look like we are foreign we think, but still they seriously inquire if we are American. We answer with the assurance we belong. The maps show borders and lines that determine who belongs where, but this landscape does not. The border area has a growing sense of distress, fear, and death as those searching for a better life must challenge the harsh and barren desert all about. 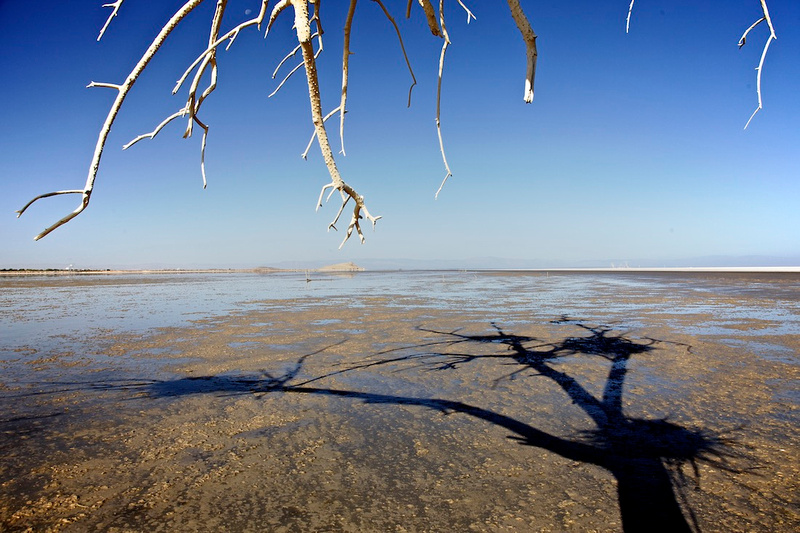 We walk over the mud flats towards two dead skeleton trees. Even from a long distance in this opalescent light we can see large empty nests of twigs that belong to lesser egrets and other large marsh birds. These bird nests wear iridescent white feather cloaks, but the avian nomads have moved on. The glutinous brown mud coated by slimy water sucks at our feet as we walk tenaciously out to these snags. Beyond there are thermal power generating plants emitting plumes of steam. Their rumble mars an otherwise totally silent environment.

The Salton Sea is a significant stopping point for migrating birds on the Pacific Flyway. This water body currently provides tens of thousands of acres of shoreline and near-shore habitats to hundreds of thousands of birds. More than 400 species of birds rely on the Salton Sea, including a large number of special status species. As the lake deteriorates, the size and quality of habitat will diminish, reducing its value to the resident and migratory birds that depend upon it. In other areas of California, surveys show people have a willingness to pay to preserve similar values. 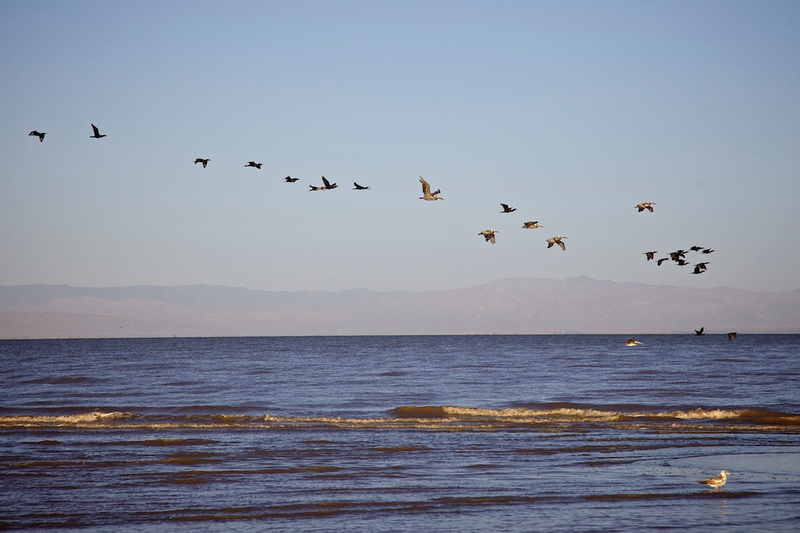 Walking along the shores near Red Hill Marina there are small dunes. In the Salton Sea’s “best” days, thanks to agricultural run-off, the area was once an island. Beyond, turning gyres of shallow water, slightly agitated by the morning breezes, shimmer in the morning light. A melodious cacophony of bird songs signals the morning feeding time that will in five years turn silent. As the salinity of the water passes the point able to support marine life, dying life will break the food chain.

The water movement builds and deconstructs false shores, leaving lines of dead fish skeletons, brush and slat frosted water bottles and a crushed folding plastic chair. The familiar smell reminds me of the common passing of a cattle truck back home. It teases my senses as I breathe in the ever-present, corrupted odor of decay and the fecund promise of bacterial life. 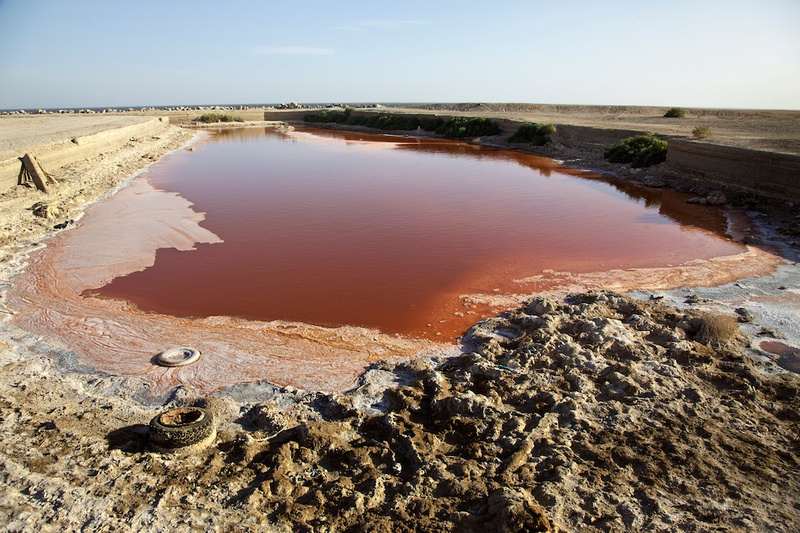 As soon as the Colorado River flood was dammed in 1907, the Salton Sea began to evaporate and shrink, Then relatively recently in the 1960’s, 1970’s, and 1980’s it began to refill with the toxic run-off of pesticides, fertilizers and other assorted chemicals from the growing agricultural industry next door. As this pollution was restricted, the water source diminished and the lake began to contract again, its water distilled into a soup of toxicity. The water that fed the landlocked sea also brought die-offs of plants and animals.

Geothermal plants suck at the earth’s heated heart. Earth tremors scientists link to the presence of these energy factories shake the surface above the thermal source. Estimates of 1500 to 2900 megawatts of power reside here and some see the hope of the future of the Salton Sea buried under an the ocean of bureaucratic red tape. 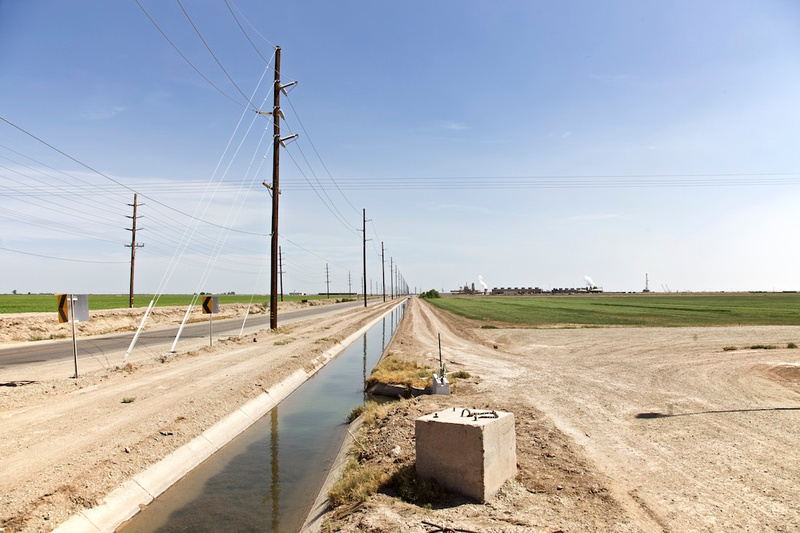 In the afternoon we see a growing giant cloud of dust rising over the lake to the west, opaque yet misty, occluding the view. Particulates measured as PM10 and PM25 are free within this fugitive dust storm. Air pollution standards are violated triggering many rules, regulations and agency responsibilities. Monitoring of ozone (03), carbon monoxide (CO), particulate matter (PM10 and PM25), nitrogen dioxide (NO2), sulfur dioxide (SO2) and lead (Pb) all spell increasing air pollution with various sources and solutions.

We drive straight roads through verdant fields, thirsty crops sucking water. Some irrigation canals move with the swishing and swinging tails of large fish, on leave from the saltier water. Many workers are condemned to the fields, uneducated, and disrespected. The water from these crops carry chemicals. They used to flow steadily to the sea. Now that the water has been diverted to address water pollution, the life of the sea has also been shut off. 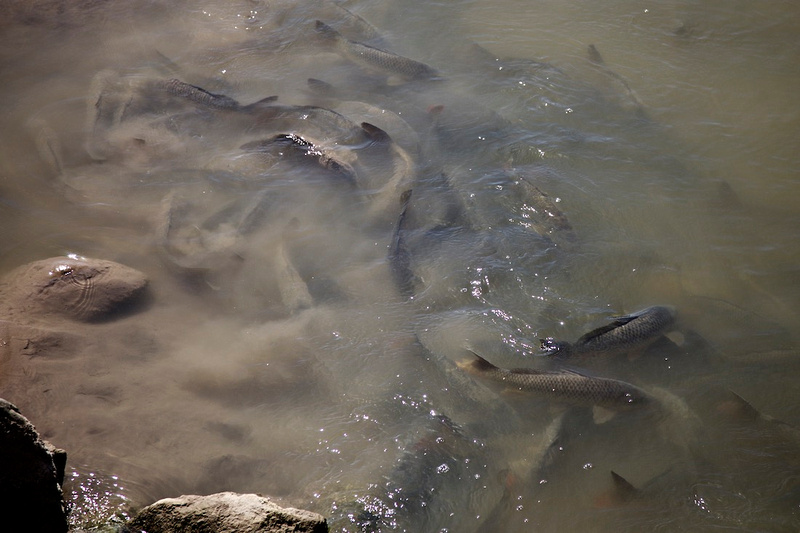 At the Salton Sea, ideas, plans and projects abound but intention and financing still falter. The future action can only become more expensive as problems grow worse and problem solvers study and study. Even a perfect solution requires human determination to make a difference.

Standing on the shore as the late afternoon sun struggles to shine through the growing dust clouds to the west across the sea, I am struck by the beauty of the light filtered through this toxic miasma. How can something born of man-made industrial corruption still be so beautiful to my eyes? Now the blushing sunset spreads across the horizon and I am transported to an ephemeral world of wonder. I realize in some way I have as yet not identified I am this sea, and it is I. We know each other: our strengths, our beauty and our desolation. We are one. 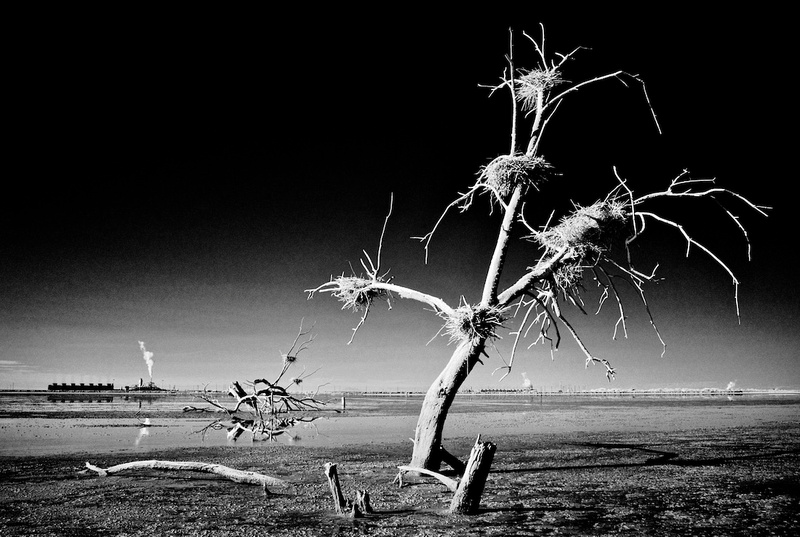