The weed-infested fields of West Lancaster, California were once perfect for growing alfalfa. They might still be if it should become economically advantageous again. Complex irrigation systems took care of the desert water needs for the seasonal crops. The fields today show the mottled patches and striated scars of past tilling.

These fields are no longer cultivated though. This agricultural past is memorialized by large concrete pillars dotting the flat land. These cement cylinders are monuments to the past, when the irrigation grid spread its life-giving liquid to the quilted fields of alfalfa. Now glistening sheets of solar panels, rigidly aligned to maximize the sunshine, are beginning to spread across the abandoned fields in dark, shiny linear arrays.

These fields are waiting for more solar arrays to be built there. Lancaster intends to become the net-zero city of the future. Driving along the rectilinear road system marked by numbers and letters, some of the straight-to-the-horizon roads are posted with crosses, plastic flowers and the names of traffic victims. They announce these undeviating roads and intersections are not that safe.

Here is the home of a man who collects old airplanes and jets. They are strewn about his front and side lawns. It is a desultory collection, the seeds to a private aeronautics museum he dreams. Rather than artifacts of a noble life in the air, they seem sad, patiently waiting to age and decay. 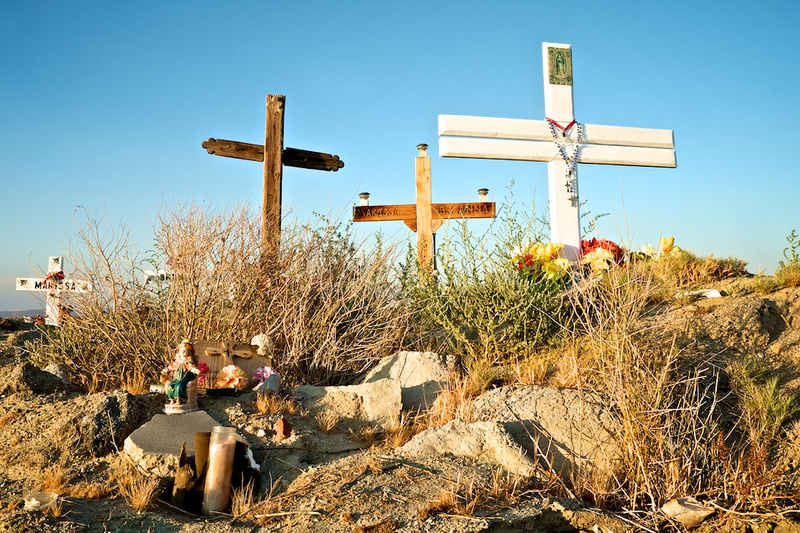 Between the wide-open fields there are occasional “McMansions.” They announce a form lacking any architectural style other than a grandiose, multi-storied, bold and ugly braggadocio. They stand to brag about their owner’s wealth. The neighborhood in between is wild, empty and succumbing to weeds and loose dirt. The sun beats down ready to be harnessed to meet the city’s goal of total energy self-sufficiency.

This dusty, flat land is subject to mudflows. You drive up into the low hills to the west where lakes have dried to hexagonal tiles with arching edges. The indigenous turtle population is gone. Two drought-tortured lakes, one stone dry, the other with some moisture and still mud-delicious, can no longer provide the fish sustenance or dissolved oxygen. These inhabitants are dead or have managed to move on in time. The lips of the lakes are marred with salt. Nearby a hesitant housing development regrets it chose this land for settlement.

In this near no-man’s land, forgotten and ignored, a city of the future lies spread across the Mojave plain. Lancaster dreams big dreams of its energy future. The Swinerton solar array is black, sleek and geometrically classic. The panels shine with the promise of industrial magic, converting sunbeams to dancing electrons through arcane practices. Now they are engineered to be scientifically disciplined: more obedient, reliable and predictable. A sign with an etched image in some voguish way shows engineers in hardhats pointing up towards the future. The figures are rigid in a faux Stalinist style of 1950s Russia. The Stalinist style is undoubtedly accidental. The image hopes to capture the spirit of this solar plant and of the city of Lancaster.

The panels all lean together to maximize their exposure towards the moving sun. They are a glassine chorus line with choreographed yet steadfast dancing moves as the sun passes overhead. Only an engineer or technician might find these dancers sexy, but they are seductive in their technological elegance.

Ordinance No. 997, written and approved by the Lancaster City Council, carries the dreams and vision of this populace. They are inspired and guided by Mayor R. Rex Parris, a political showman, to make Lancaster the first Net Zero city in the nation. They intend to produce more energy here than is consumed. The ordinance proclaims, “The City of Lancaster has been actively investigating options to procure and provide electric power to citizens with the intent of achieving greater local involvement over the provision of electric services and promoting competitively priced renewable energy.”

Partnerships are the way of the future in solar. In 2010, in partnership with SolarCity, Lancaster began a project to make solar installation for homes and businesses more affordable and more efficient. This is a major component in becoming the first Net Zero city in the world.

Now the alfalfa fields are tessellating into solar arrays. Instead of obfuscating the view, or inspiring cries of “not in my backyard,” the dusty plains are now the engineered tablelands of the future. Lancaster is in a constant competition with its neighboring city, Palmdale, promoting industry to the point of absurdity with debatable business incentives.

Yet with solar, the path is clear and the conviction strong. Now green energy costs about fifteen percent more than traditionally generated electricity, but the future promises a price balance setting in.

In the meantime, Lancaster locks in this Net Zero development vision, tiling across their dusty desert with silvered dark panes of glass, covering the roofs of the city buildings with panels, and the homes of Lancaster with solar capacity.

Look upon this place. Here will rise a Net Zero city of the future.

Desert Dispatches
Hi Melissa
I am sorry you took my remarks as negative. When I was "reading" the Lancaster landscape, I saw a city in transition from the past to the future, both bravely and with innovative spirit. I actually see solar arrays as pleasing to the eye, a future aesthetic. So I find Lancaster interesting in many ways including MOAH, the Laemmle Theater and cafes on Lancaster Blvd. It is one of the hippest desert towns I know and go there frequently for R and R. But I apologize for not being fully clear about what I see there. You're lucky to live there on the new edge of sustainability.
Christopher
Melissa(non-registered)
There are plenty of things still growing out in Lancaster. If you head out near ave K and j and 90th east-120th or so you will find huge fields of alfalfa, carrots, potatoes, onions, and corn. Even Bolthouse farms grows out here. You made it sound like an awful place but its actually full of natural beauty.
No comments posted.
Loading...
Subscribe
RSS
© Christopher Langley & Osceola Refetoff