EMERALD CITY OF THE SALTS

Trona shimmers in the March morning light across the salts-encrusted Searles Dry Lake. This company town is a beautiful if dystopian Emerald City. Condensed vapors from chemical processing pour from towering smoke stacks. Production looks full-tilt. The facts are different.

The town is dying. One hears a death rattle down most of the residential streets. These streets have many abandoned houses or burned ruins nestled between the still occupied but rundown buildings.

This town is rapidly shrinking from economic pressures over which it has no control. Many of the services it once had, a cinema, worker barracks, recreational community centers, are closed or repurposed. Part of the movie house is a restaurant and theater. The downsized theater remains useable but without any films. The other half is now storage for the Searles Valley Minerals, Inc. The Tornado’s high school is too big for the dwindling student population. Classrooms and facilities go unused. The town uses these buildings like a boy forced to wear his bigger brother’s clothes.

Arson is a regular occurrence. Many streets have burned ruins scarring the otherwise suburban setting. People leave everyday to relocate in nearby Ridgecrest, which has the many services and recreational opportunities American children and adults expect. Workers still commute in for work at the plants. Other families have left the area completely, on to greener pastures, their optimism depleted from the failure that hovers on every street corner. 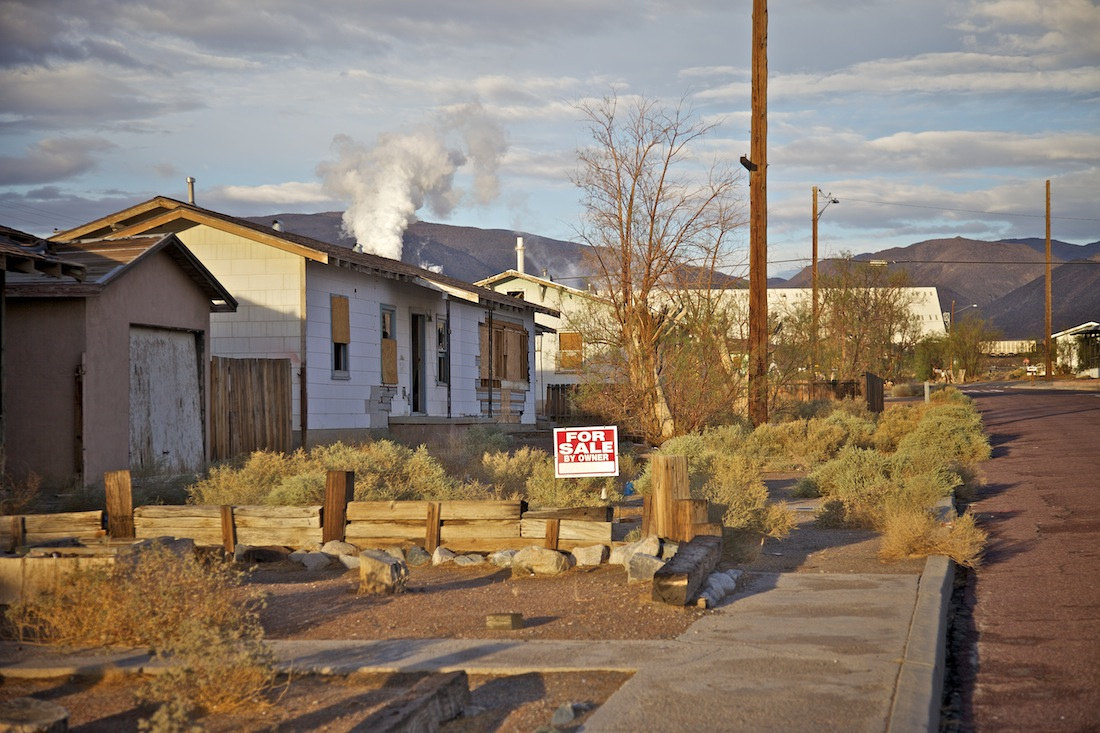 At a local church fundraiser, a member sits and says,” It is nothing like it used to be.” He works at one of the three plants, which are still producing chemical product. He and another Tronan have a discussion of “four-nines and five tens.” They are talking of their work schedules at one of the plants, complaining about the long hours they are working now. They both agree that when next year they don’t have as many hours, how happy they will be they had the work now. The lay-offs of 1980’s and the relocation of workers to other company owned plants in Oklahoma City have badly hurt this company town. The population has gone from 6000 to under 1500 in the last few decades.

However, again, these facts do not capture Trona’s full story

The residents, and those who once lived here, are determined to celebrate the town’s centennial 1914 to 2014. Most of small town America has a sense of historic pride, yet Trona is looking failure in the face.  These town loyalists have manufactured enormous community pride and spirit none-the-less.

The all-day Trona Centennial Celebration History Symposium put on by the local Searles Valley Historical Society turns out to be a masterfully organized and run 12-hour marathon event with regular ten-minute breaks. It is convocation of passionate historians of the area reporting back detailed and fascinating vignettes of the history of the area from multiple perspectives.

Most of the presenters want to go on for an hour or more, but the organizers have limited them to twenty minutes. A timekeeper holds up warning signs about how much time remains. The speakers are obedient and quickly move off stage. What follows is a ten-minute break where people jump up to talk to each other, greet old acquaintances and talk about their memories of times past. It is a love-fest from these rough-edged, hardworking people who have endured all kinds of physical and emotional challenges living in this severely rural, isolated area.

Periodically, a speaker will reference the nostalgic loyalty of the people who live or lived here. One speaker ends with a slide of a road sign that says: “End of the World 10 miles; Trona 15 miles,” provoking loud laughter and applause. It is an old joke for them. They know the irony of this sign is mocking but also describes why they are so bonded to this industrially corrupted landscape. The good memories, hard work and determinations keep them connected to the land.

There exist competitions and jealousies among the different communities: Trona, Argus, Westend, Pioneer Point, and Borosolvay. “Growing up in Borosolvay, now almost totally erased from the land, we were ‘free-range children,’” one speaker remarks.  The crowd laughs and nods. From the stories he tells about playing in forbidden cement bunkers below the desert sand, he makes his point. Concluding his talk, another asks all the “Westenders” to stand up. Twenty or so people do that. Everyone applauds. 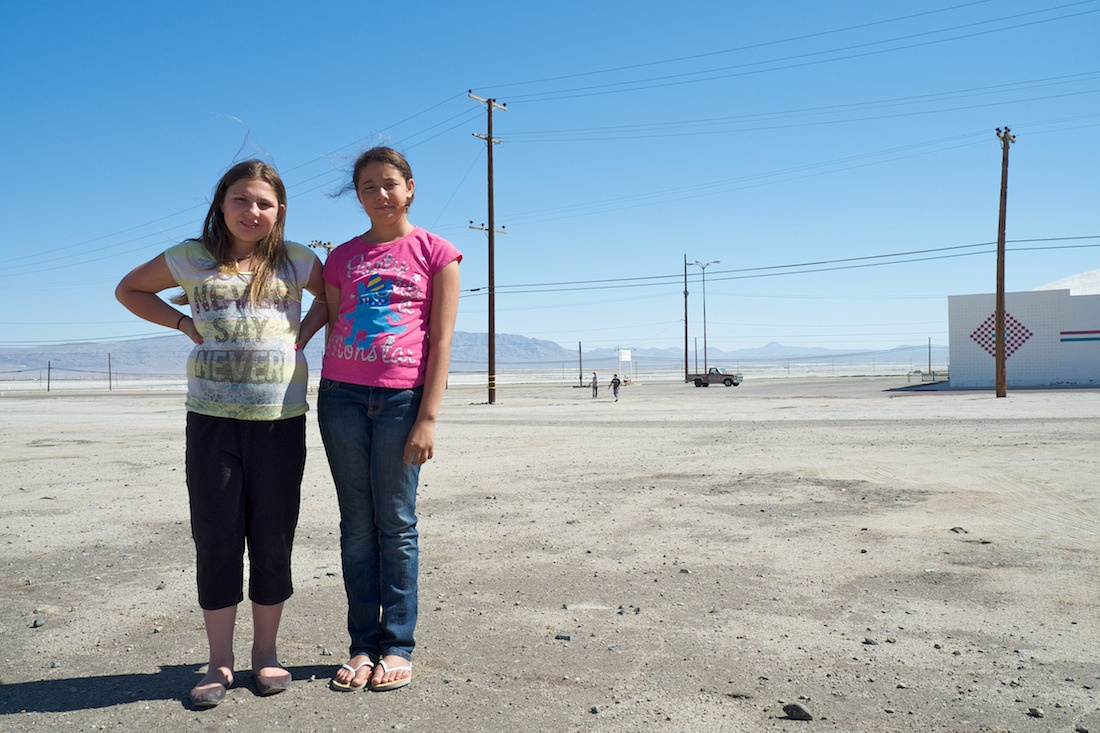 Another speaker claims that Westend had the best basketball team, and reminisces about his life during that period. A past resident remembers when a local war veteran named Pat Develan came to his birthday party. The boy, now a grown man, has had this hero to admire all his life. Among other things, Develan has seven purple hearts from the Korean and Viet Nam wars.

These folks love Trona. This bond with a desert industrial site defines who they are. They find true meaning in their lives all bound-up with the land. Desert people through pain, sweat, bone-grinding hard work, heat and cold anchor their lives in the land.

High & Dry intends to tell the story of Trona from the inside, using the stories that these people tell about living there. We will remain forever outsiders, but we respect and now seek the Tronans’ personal stories. We hope to bring them to you in the months and years ahead.

It will take time and work to capture the multi-faceted story of Trona through the spirited people who lived there during the last one hundred years. The goal is high. No less determined effort is acceptable.

GLENN BIGBEAR(non-registered)
We stopped late at night in my brand new HONDA CRX. from VANCOUVER ISLAND B.C., going to visit family in REDONDO BEACH..........84 IIRC. TRONA always sticks out in my mind........Even more so than the borax /20 mule teams in BORON,days gone by.....
Working at a shipyard on VANCOUVER ISLAND, a friend/head painter had worked x2 at TRONA......
Will stop by on way to YUMA in NOVEMBER...
Ian Robertson(non-registered)
A friend and I passed through Trona in 2011 as part of a cross country motorcycle trip from Maryland to California and back. Of the places, sights and scenery, Trona is, for some reason, the one stop that sticks in my mind. It was eerily deserted, almost as if one day the whole town picked up and moved. But it was strangely beautiful.
Rich(non-registered)
what a strange place...nice article. I love reading about Trona and these strange desert towns. I remember reading an article about their football field a while ago...something like it was the only sand field in the country.
No comments posted.
Loading...
Subscribe
RSS
© Christopher Langley & Osceola Refetoff