VIEW FROM A HOLE

It is surprising how many people, when choosing a cemetery plot, evaluate the view. In Lone Pine, some people have their heart set on an eternal view of Mt. Whitney, the tallest mountain in the lower forty-eight states. I work with the Mt. Whitney Cemetery, so I know this happens.

Lone Pine, on the eastern side of the Sierra, at the cusp of the Mojave and Great Basin deserts, has four cemeteries, five if you count the flu epidemic cemetery of the early 1920’s. Keeler and Darwin have their own cemeteries, but the locals pretty much take care of the burials themselves.

People in the area have many thoughts about death. Some have very clear visions of the after-life as life eternal based on their Christian faith. Other people have more general spiritual views and do not consider where and how things they experience will be after death. Others believe in  reincarnation and being born in a new body. There are those who take great comfort in knowing they are going back to the earth. Then some have no belief at all in life after death.

For people in the area around Mt. Whitney, the mountains present comfort. The peaks are always there, as if a barrier against the outside world and its evils. People feel the mountain escarpment is there “to hold them up.”  The Sierra Nevada often looks different from day to day. They are snow covered or bare, veiled in storm clouds, or decorated with puffy cumulus cotton balls. The mountains are always awe inspiring and beautiful.

Maybe people who are concerned about the view from their hole want bragging rights, as do their heirs. “You can see Mt. Whitney from the plot” as if it was something significant to brag about.

One time a man, who lived most of his life in Saline Valley to the east, spent his last years as an old man in the Owens Valley. When he died, his family wanted him to be buried facing Mt. Whitney. His friends argued he should be buried facing east towards the Inyo Mountains and Saline Valley, which lay beyond. It was an area the dead man had once loved more than anything except women, it was argued.

Because there was growing hostility in the community, the man was buried without anyone being sure which way he faced. Only the undertaker knows, and he isn’t saying. 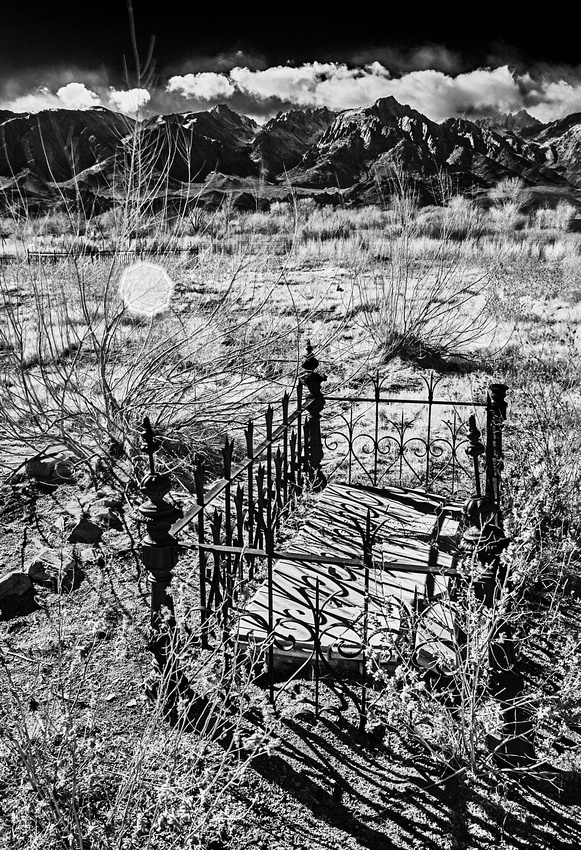 Christine Williams(non-registered)
Love the story about Lone Pine and it’s many cemeteries…who knew a small town like Lone Pine had so many! As a visitor to Lone Pine in my youth I have fond memories of camping in the Eastern Sierra. My long time family friends The Powell’s have The Frontier Motel in Lone Pine…now being run by the 4th generation of the Powell Family.
Winnie Dean(non-registered)
I believe being buried between both mountain ranges - the Sierra's to the west, and the Inyo's to the west - would be providing the biggest, gentlest hug there could be as you were laid to rest one last time...
Linda K. Haun(non-registered)
As the manager of the Mt. Whitney Cemetery District located in Lone Pine, I can testify to Chris's statement. The main cemetery is also surrounded by the vast stretch of desert on three sides, with the Inyos far to the east and of course the Sierra far to the west, lending a sense of isolation and quiet contemplation that is very attractive to those who visit from big cities. We often get people from So. Cal and even other states requesting burial here, which we can do for an additional fee. The fourth side of the cemetery is Hwy. 395, acting as a symbol of both arrival and departure, and helping to make the cemetery a very special place.
No comments posted.
Loading...
Subscribe
RSS
© Christopher Langley & Osceola Refetoff