MYSTERY AND DRAMA IN THE HIGH DESERT SKY 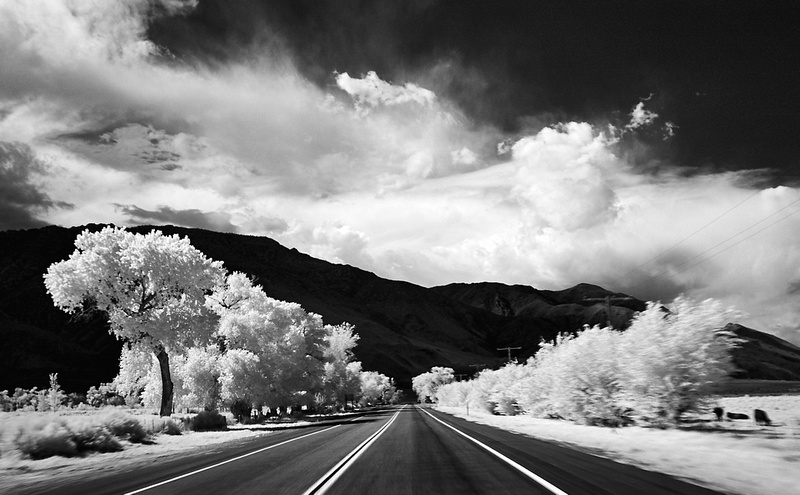 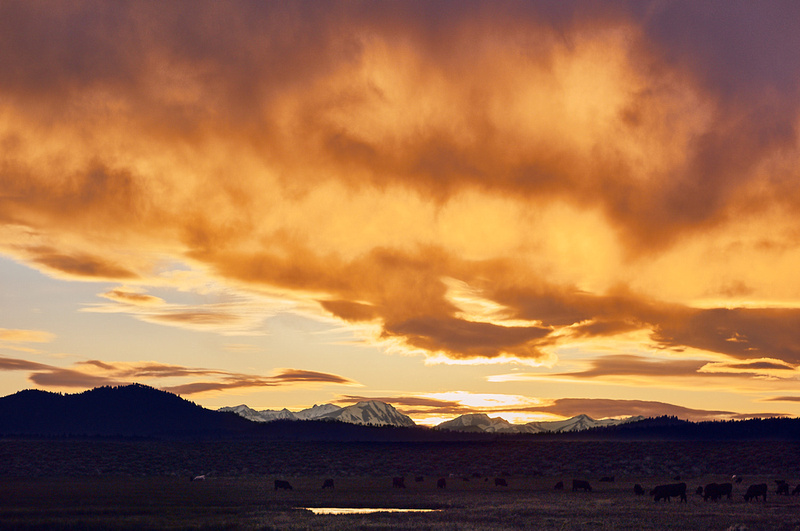 In the California high desert of the Owens Valley, I look into the sky and see a snake, a, loosely gowned woman, a silver-bellied golden trout, the Wicked Witch of the West. Mind you, I haven’t had too many martinis, and I am not hallucinating, but I see these things existing near the Sierra Nevada escarpment not far from my home. They are formed by all kinds of clouds that occur often in these high dry lands of the Mojave Desert.

When I walk out into the desert and the skies are illuminated by the setting sun, I feel suddenly at peace. I am now in this dazzling display of swirls, slashes, and streaks of the clouds rushing by. The stars, shy at first, peek out. I am one very small part of this universe. But I exist. 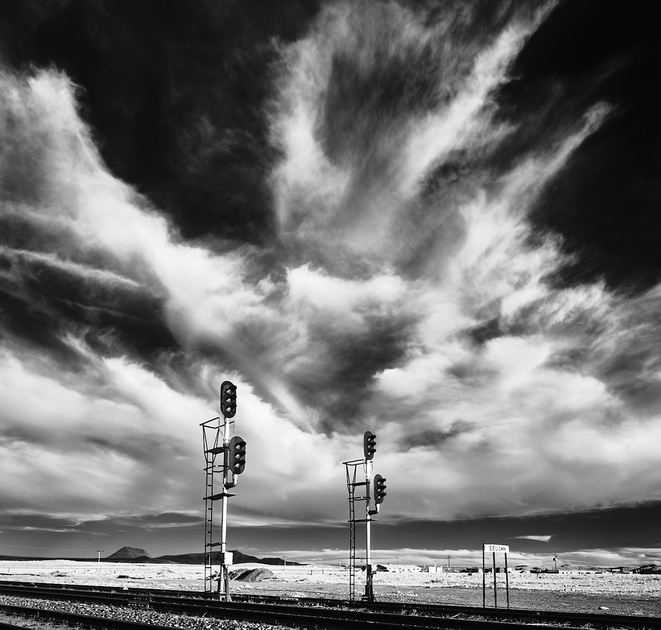 The Mojave is a classic rain shadow desert. That term is remarkably descriptive because moist winds and storms come off the Pacific and meet the towering Sierra Nevada Mountains. Being forced to rise, the rain and moisture is squeezed out, and by the time they descend these clouds are significantly drier. The area where I live gets about four to five inches of precipitation yearly, but this year we have had only about three-fourths of an inch. The desert flora and fauna are adapted to an extremely arid climate. 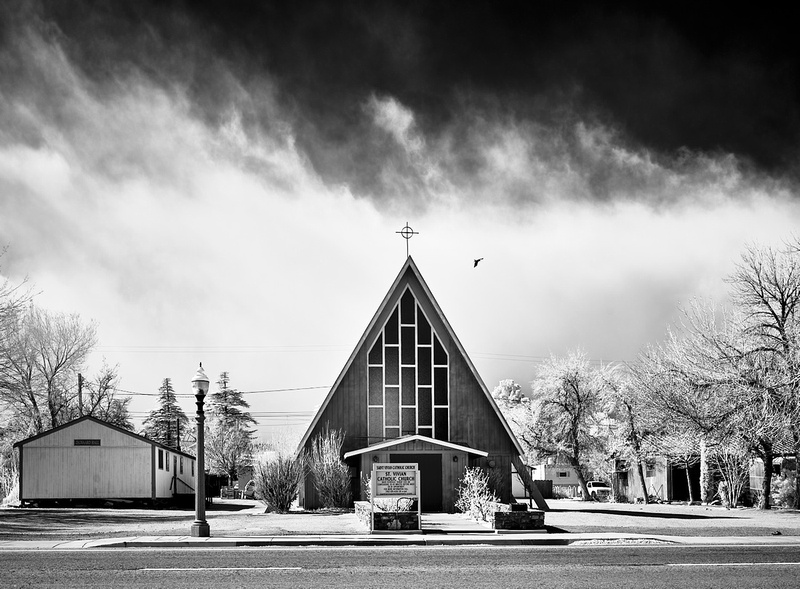 People ask me how we put up with such conditions? Well, we adapt. I do suffer “rain hunger” on occasion and then head north to greener pastures. But the clouds here are different. To the attentive viewer, they are works of art.

However, in this climatic wringing out process, some of the clouds remain, creating cloud-clad tops to the mountains, even with swirling mists, but no rain. Some people here state that Mt. Whitney is a “shy” mountain, pulling an obscuring veil across her face. 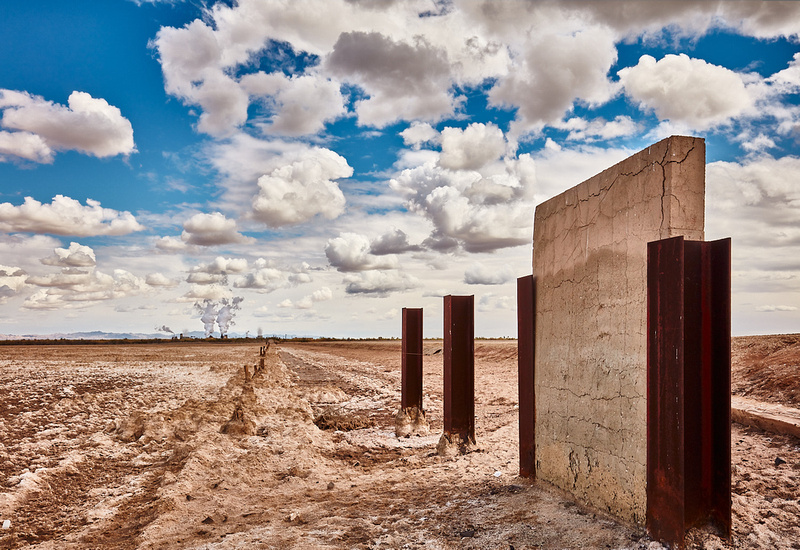 The deep valleys east of the high peaks do create a rare phenomenon called the Sierra Wave. These unique clouds occur most commonly in winter and early spring and are natural forms of great beauty that often stay all day. When illuminated by the setting sun, they are unforgettable.

A Sierra Wave forms when a cold front approaches California from the northwest. The winds over the Sierra become significantly accelerated. As the winds hit the leeward side, their ascent is powerful. A “cap and banner” typically tops the Sierra Nevada ridges obscuring the higher peaks. Then the wind roars down into the Owens Valley, crossing the flat floor area and is then uplifted again against the Inyo mountains. These winds can approach 600 miles per hour in the high elevations. 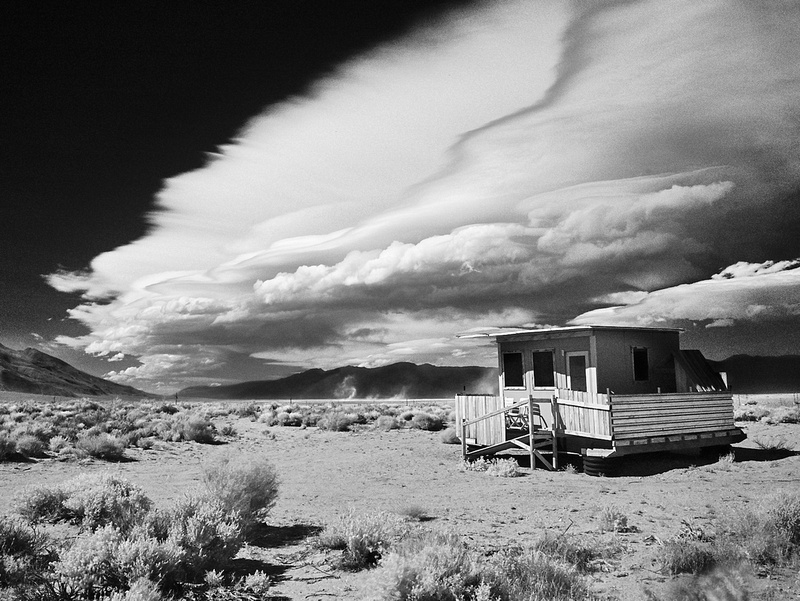 A stratocumulus cloud, forms, often looking like a stack of dinner plates, As it evaporates, the invisible moisture is uplifted forming a turbulent roll cloud, which appears stationary. This rotation causes the cloud’s front edge to roll under giving the illusion the cloud is not changing or moving. A complex and rare geographic situation is necessary to cause this phenomenon.

Technically this cloud formation is known as a lenticular or lenticularis. The name comes from cloud watchers observing its lens-like curve shape resembling a lentil. As we will see, cloud effects get their names from all kinds of everyday objects. The scientific name for midlevel clouds such as a Sierra Wave is altocumulus lenticularis, truly a mouthful. I am happy calling it a Sierra Wave. 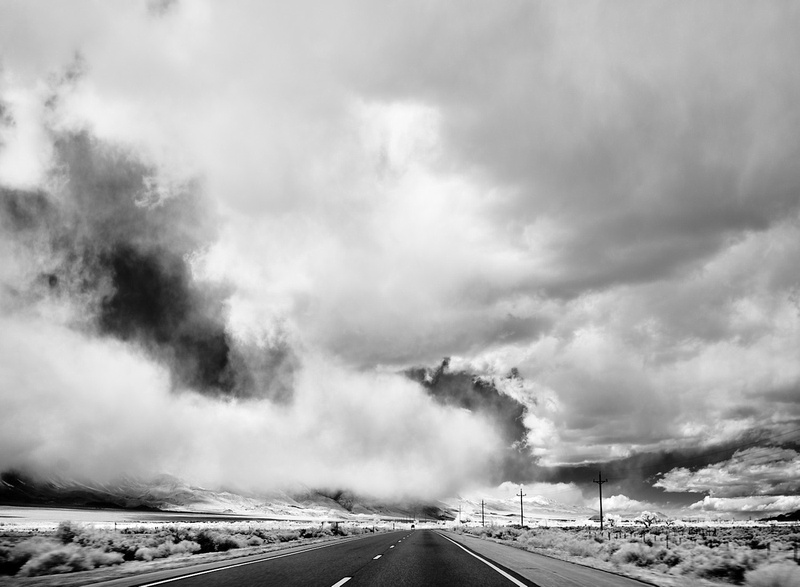 But what is a cloud? We all know them, see them, and identify them as clouds. Did you know the average cloud is made up of 360,000,000,000 droplets per cubic foot? These droplets typically are a few thousandths of a millimeter in size. One cubic kilometer, medium-sized cumulus carries water estimated at 220 tons on average.

An average elephant weighs about three tons. Buddhists and Hindus see a cloud and an elephant as first “cousins.” This unlikely connection comes when the burning summer heat is relieved by downpours called monsoons. So in weight, eighty elephants are equal to one average cumulus cloud. Makes you think for a moment about what is hanging over head. 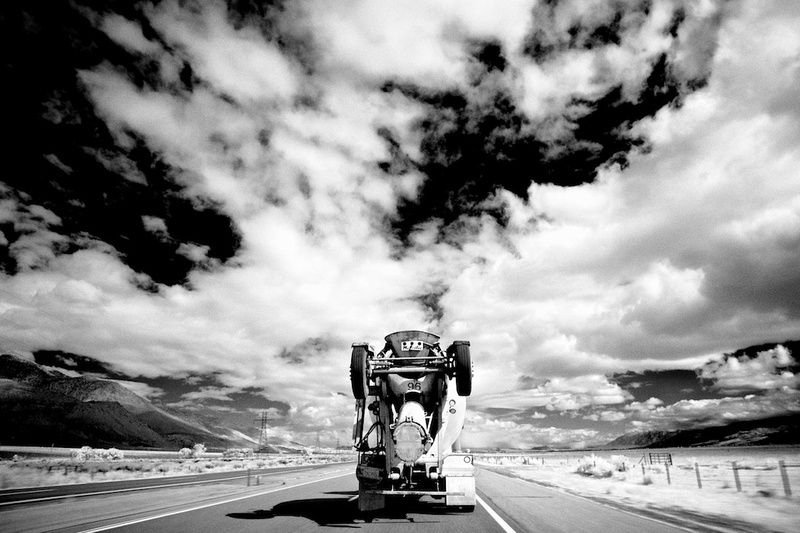 In December 1802, Luke Howard began the scientific nomenclature of clouds, heavily influenced by his grounding in Latin. Howard’s system has three general kinds of clouds (from the Latin) cirriform (detached and wispy), cumuliform (mostly detached and heaped, rolled or rippled), and non-convective stratiform (mainly continuous layers in sheets.)

German meteorologist Ludwig Kaemtz and Frenchman Enamelien Renou continue to perfect Howard’s system finally ending up with five basic categories cirriform, cumuliform, cumulonimbiform, stratocumuliform, and stratiform, based on the clouds’ physical structure and process of formation. This scientific nomenclature does not well serve the poet in my heart. But my almost fifty years of observing clouds in the desert has been time well spent. 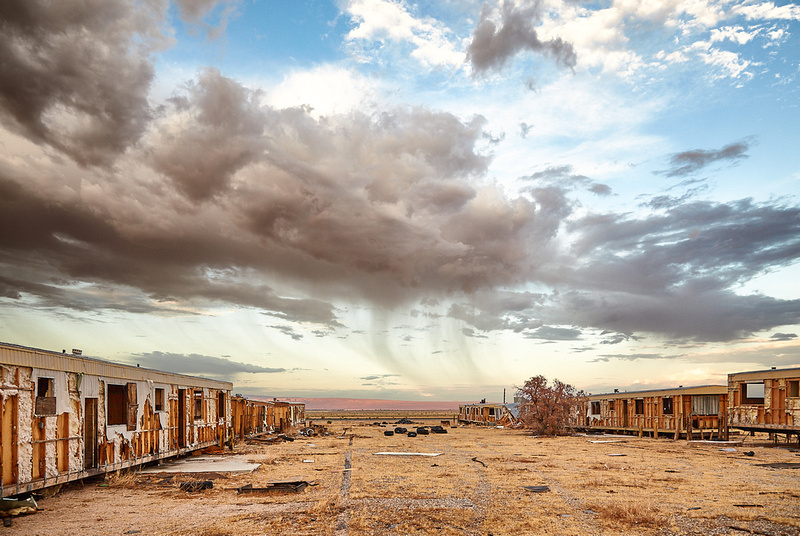 There are many rare and unusual clouds or cloud processes in our world. Three more I would like to mention are virga, sundogs, and halos. Technically these are conditions or optical effects, but they are among my favorites, and happen occasionally in these beautiful, arid lands. Virga is simply when a rain cloud releases rain in long curving trails that never reach the ground. I love virga’s misty, fading tails. Though beautiful, virga brings a wistful sense of loss to me because we need this gentle rain so badly. 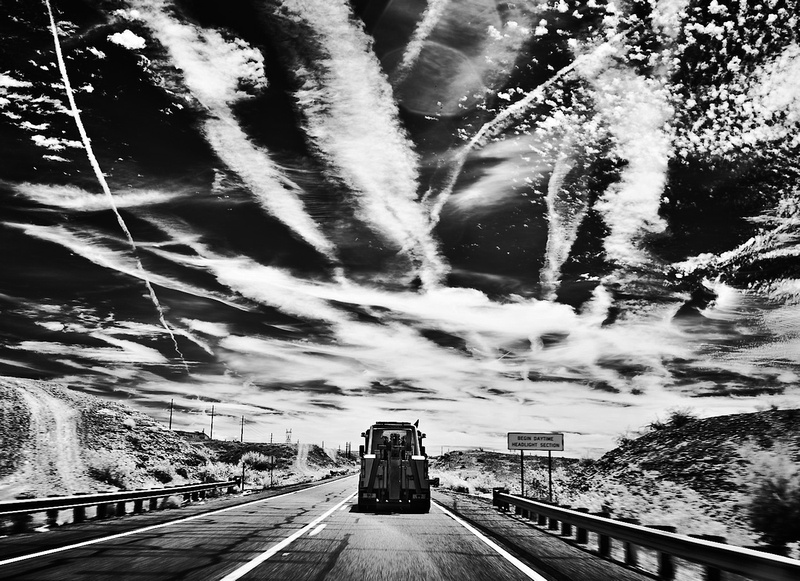 If you’ve looked, you probably have noticed sun dogs surrounding the sun like a two-member canine pack. They pursue the sun on its course, burning with reflections of the sun itself. Sundogs can even occur with the moon and are created when light is refracted through the ice crystals of thin high clouds such as cirrus, cirrostratus, or cirrocumulus. 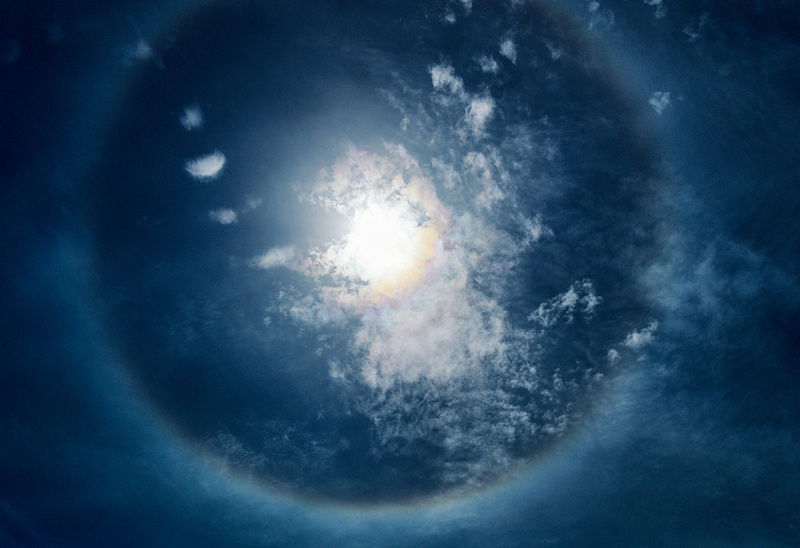 The third effect is a halo. Again, halos are formed around the sun or moon, and they are surprisingly large and more common than you might expect. They look like a circle or ring around a light source in the sky. They can have a reddish inner edge in the band, which can be complete or incomplete.

By the way, there are many more effects caused by clouds such as iridescence, corona, glory, rainbow, and crepuscular rays. These last ones my wife and I nicknamed “Cecil B. DeMilles” because the filmmaker frequently included them in his movies after the earth is saved from the flood or to establish the beauty of God’s creation. 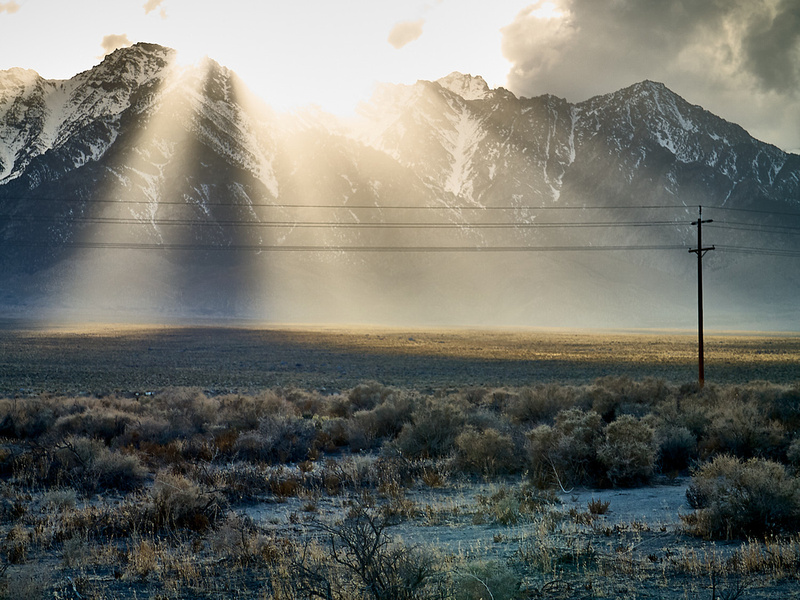 I want to mention how to see shapes in the desert clouds. It takes imagination, visual aptitude, and clearing your mind of distractions. I think of it as a mindful meditation. It also takes a kind of escapism and a desire to have some peaceful time alone. You can use the experience to create your own personal taxonomy. This is both healthful and therapeutic. It requires taking time to notice clouds and exploring their aesthetic power. It can lead to personal storytelling and promote emotional wellbeing.

When I need to solve a personal problem, or drill deeper into an existential query, I go to attend to these clouds. Their power, beauty, and ineffable focus on life remind me that I not only exist, but have meaning and purpose in my life. That brings me both clarity and inner peace. 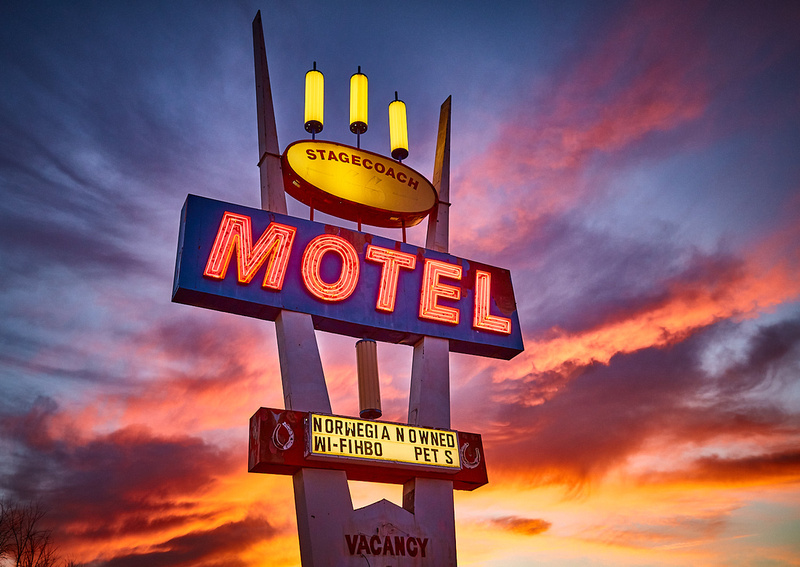