THE HUDSONS: AT HOME IN A LASTING LOVE

Sometimes you just look into someone’s eyes and know those are the eyes you want to get lost in for the rest of your life.

After a first meeting, you won’t know all the details of a couple’s life together, but you will know with conviction if they have been in love. Joe and Delores Hudson in a few months will celebrate their sixtieth wedding anniversary. They are at the Esparza Family Restaurant in Trona just finishing lunch. A shared confidence radiates from this couple. It transmits to any bystander they still are in love.

As they tell us their story, I soon learn that they married when she was nineteen and he twenty-one, after knowing each other two months. Delores tells me she interrupted the wedding ceremony three times with hysterical outbursts. She was opposed to marrying this man because she barely knew him. Her brother and his fiancé had joined the couple to make a double wedding. Instead of marrying in the local Foursquare Church, they had travelled to Las Vegas for the wedding. Delores’ brother lowered the boom and told her she was behaving like a spoiled child. “Of course you will marry Joe.” Almost sixty years later she knows it makes for a good story. 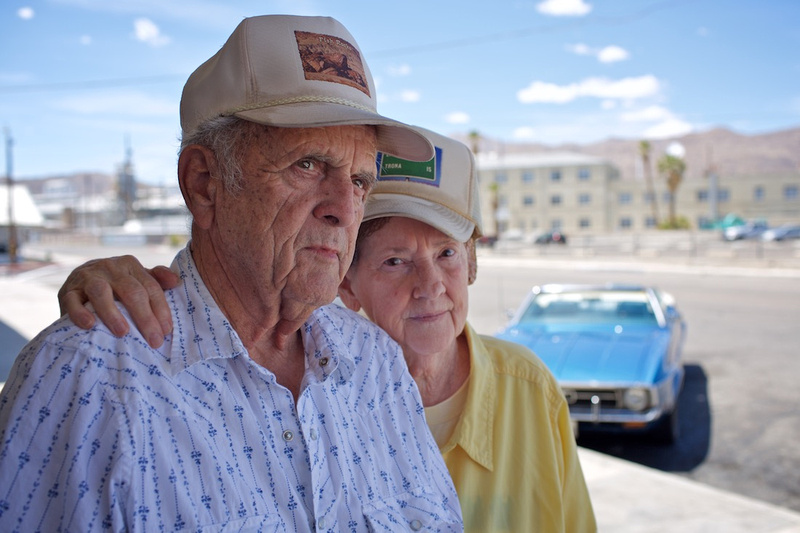 Joe ended up working at the Company (now Searles Lake Minerals) for fifty-six years. Delores leans over the table to me, confiding that Joe “never missed a day.” That makes him an “iron man,” the likes of Cal Ripkin.  Both born in Kansas, they didn’t meet until they landed in Trona.

Joe’s initial employment in Trona was interrupted by service in the Armed Forces from 1952-54. Coming home to Trona from the service, in those days without a car, was a real challenge. Over-heating battery smells on the plane forced his Army transport to land unexpectedly in Salt Lake City. When he finally got to Fort Ord, he bought a bus ticket to Bakersfield. Then he travelled on to Four Corners, California where Highway 58 crosses Highway 395. By hitchhiking, he reached Red Mountain where he slept by the side of the road. Cars averaged only one an hour on Trona Road but he finally did get to Trona. The couple met soon after.

Today, Delores is wearing a popular local hat: “End of the world 10 miles, Trona 15.” She seems to truly love this place she still calls “home,” even though she and Joe now live in nearby Ridgecrest.

Delores insists that Trona was once a fun town, with entertainment often created by the Tronites themselves. Austin Hall, built by the Company in 1913, had most of the services, such as a phone connection, a barber, and a restaurant. It was where they showed movies under a flapping canvas cover.

While I thought the heart of Trona was destroyed when the company tore down Austin Hall, Delores disagrees. “They took that down slowly piece by piece. The services and products offered there migrated to privately owned stores.”

She insists it was the Company closing Valley Wells swimming pool that killed the town’s fun. Valley Wells was a reservoir for holding brackish water, to be used eventually by the plant. Not potable water, it was great for swimming on star-filled hot summer nights.

Delores remembers, “There had been the Rec Hall, the Trona Tigers baseball team, and the bowling alley was big.” She also cites archery and tennis. “When the Kerr McGee Company bought the plants, they slowly killed the town. Then there were the strikes which saw one person killed and many of the strikers jailed.” Trials had to be held. When Delores was called to jury duty, she said she wouldn’t serve. “I was prejudiced,” she had explained emphatically to the court at the time. The Company’s covenant with the townspeople had been broken. She sided with the town.

When a grandson was struggling in school, given straight F’s, Delores said it meant the school was failing, not the child. That eventually led Joe and Delores to move to Ridgecrest where the schools were much better. The child flourished, but Delores missed her home on Benton Street in Pioneer Point. Now they come back all the time to see friends and to drive by her house. She tells Joe she wants to buy it and move back, but Joe remains silent. It’s not going to happen.

They lost a grandchild, and buried him in Ridgecrest, and do not want to leave him behind. They visit Trona often. Today, they come here in their ’71 Mustang convertible. Joe makes clear it is Delores’ car. It is a beautiful blue, one of several classics the Hudsons own. Joe has them around Ridgecrest, stored in garages out of the harsh desert sun. 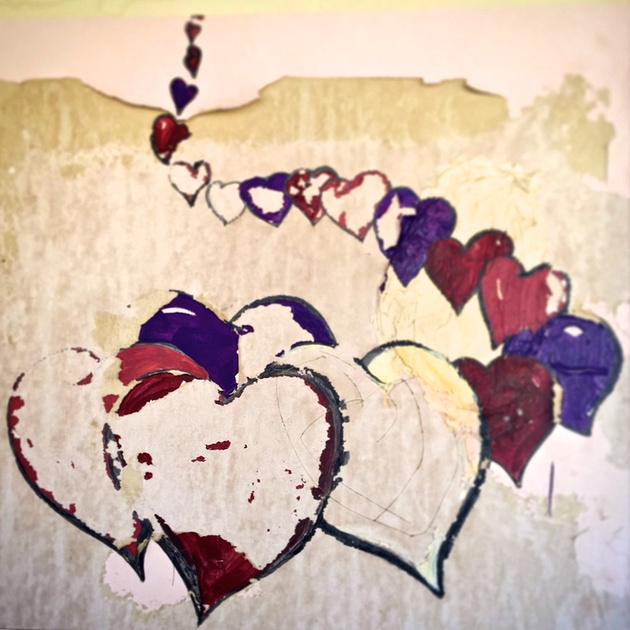 Delores wistfully looks at me. I realize how much she loves and misses living in Trona. I ask how come so many Tronites that I meet are so closely bonded to this struggling, rundown town. “It’s the people,” she says. “They hang together. All of us are here for each other when we have needs.”

Osceola takes them out to have a portrait taken. Delores hesitates. This photographer can be persuasive. As they stand before their classic Ford, Delores slowly cuddles in to Joe’s neck and smiles slightly. She looks safe and smitten.  He looks proud and very certain of how he feels.  These lovers could be posing for their high school prom.

They wave and leave. Joe peals out for our benefit. We stand, a bit envious of this couple. The good feeling they leave behind envelopes us. These two people have found love and true happiness beyond the turmoil of modern life.

In this day and age where people change relationships, we wonder how these two have done it. Were they perfect for each other at the beginning, or has their marriage been a day-by-day affair created lovingly and patiently over time? Has living in or near a place you love helped? The answers must be here. We simply need to know how to read them. Perhaps, in time, we will come to know more about their relationship and why it has endured, like the town they still call home. 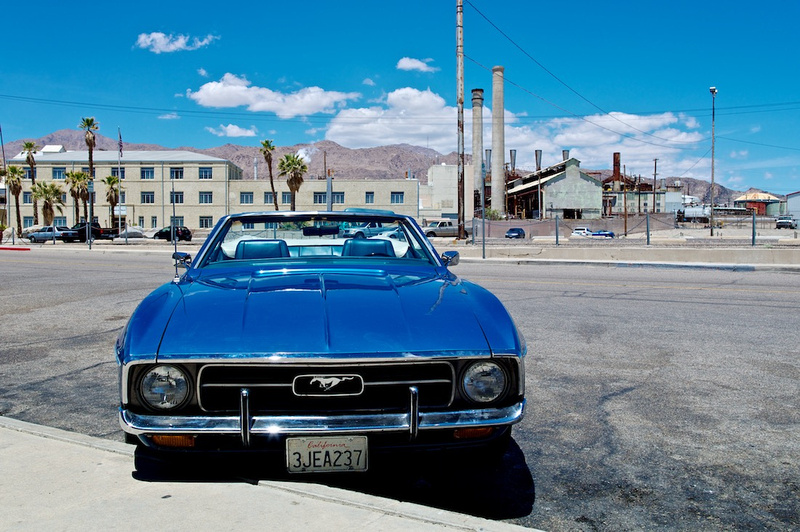 fad ibra(non-registered)
I believe in the immeasurable power of love; that true love can endure any circumstance and reach across any distance may they live more to prove their for each other
No comments posted.
Loading...
Subscribe
RSS
© Christopher Langley & Osceola Refetoff