TRONA HOME SERIES: HOME IS WHERE YOUR HEART IS

High & Dry spent a recent weekend doing immersive field research in Trona, CA, a 100-year-old mining community just south of Death Valley. While that sounds very studious (and it was informative), we enjoyed our work immensely and were given a hearty welcome by the citizens of town, who are determined to stand their ground despite difficult economic conditions.

Delores and Joe Hudson are finishing lunch when we come into the Esparza Family Restaurant. After ordering hamburgers, we sit down. Soon Osceola has engaged Delores and Joe in conversation. I am drawn into the story of their lives together. This year they are coming up on their sixtieth wedding anniversary. I think about my wife’s recent death after 46 years of marriage, and the loss makes me feel closer to Joe and Delores. I am envious they will have the company of each other in old age. After a long time together, the emptiness from the death of a partner leaves you feeling no ground beneath your feet and your future unknown.

They once lived in Trona, but moved to nearby Ridgecrest for family reasons. Delores aches to return.

Later, Osceola captures Joe standing by his blue convertible Mustang, but the photographer knows a better portrait would also include Delores. She has her newly washed hair covered by a scarf, but is still willing to stand by her husband, partner and lifelong friend. She positions herself close behind him for the picture, her head slowly nestling into his neck. 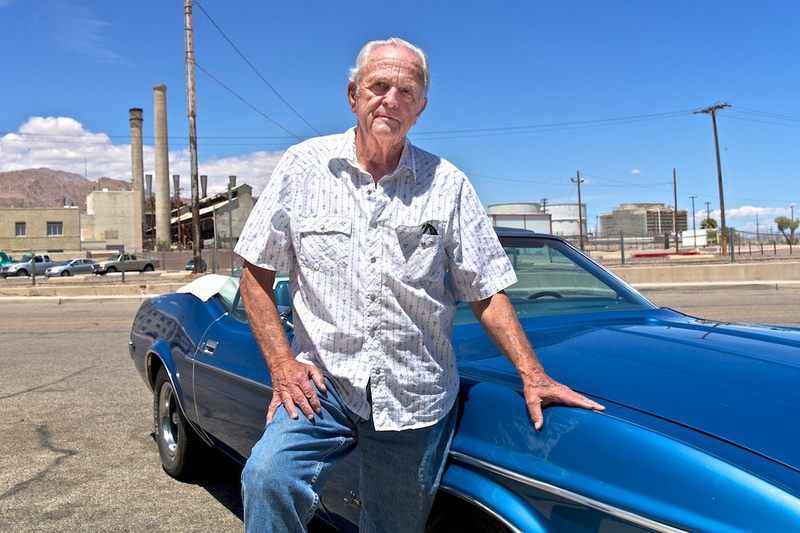 We wonder what is the secret to staying in love while married for almost sixty years. We mean to learn more.

Earlier, Delores had recognized Trona native Jeff Newman as he entered the restaurant. Now in full beard and long hair, he was in school with one of her daughters. He was born in Trona and recently has returned. We wonder why someone would come back to a town that many outsiders think is dying.

Jeff counseled us to find Andy Ledezma. He is the oldest living person who was born in Trona and still living here. We wonder what advantages are in Trona for someone who was born there.

Late the next day, Osceola and I return to an old abandoned house. He has already photographed it on another Trona trip, but wants to reshoot it. 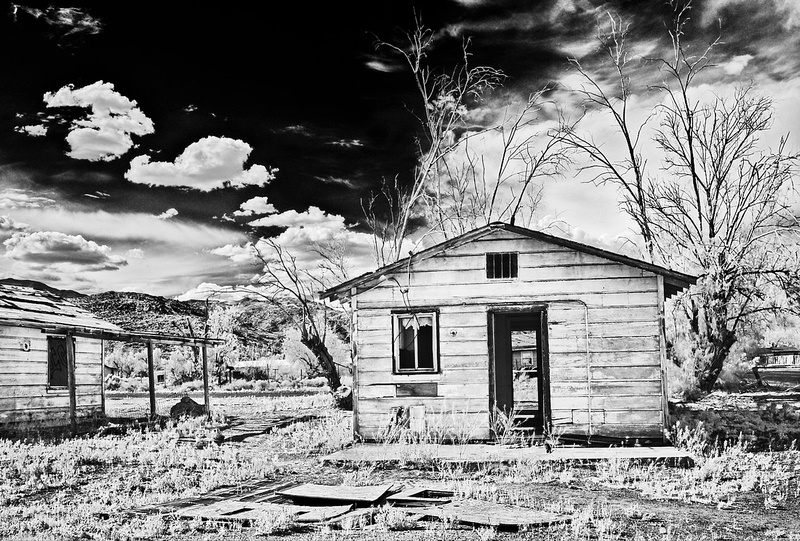 Andy knows the history of every house, every block, and the town in toto, not to mention every one living there. When I say he is the “mayor” of Trona, he says no that would be Lit Brush. He is the “assistant mayor.” A twinkle of pride and fun crosses his face. He loves this town and almost every one there. His story will have to wait, as he has to be on his way to visit another sister.

Earlier in the day, we have a brush with security and small town suspicions. The tangle of valves on the pipes that control the pressure, or “throttle” the water from Ridgecrest to Trona has caught Osceola’s eye. We are parked by Trona Road (Highway 178) in Poison Canyon. I get out my small folding chair, my project journal and my laptop, the simple tools of the professional scribe. 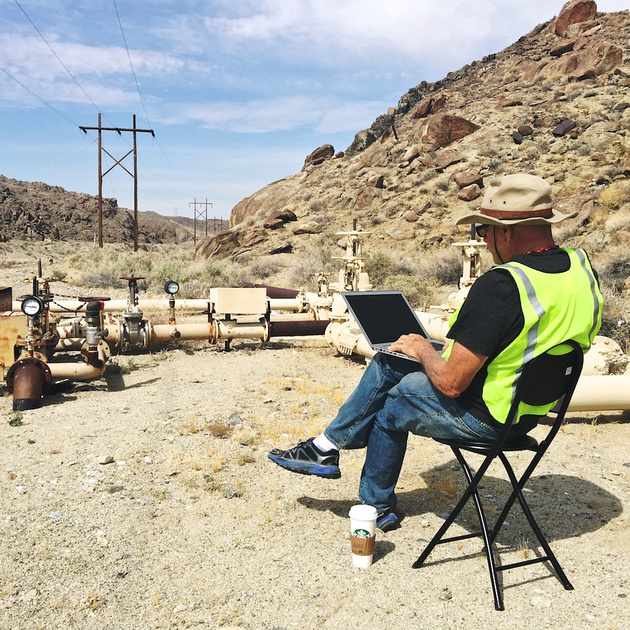 Osceola takes a break to make a photo of the writing half of our project actually working. We both are wearing neon yellow safety vests. He instagrams the photograph with the following commentary:

High & Dry’s Christopher Langley captured in the field near Trona, CA. The writer sports his “Cloak of Invisibility,” which helps him to blend into the terrain, discouraging interruptions from law enforcement and utility personnel when working near electrical and hydraulic infrastructure.

I comment that he is calling down security as soon as they see the post. A few minutes later he posts his next photo of me working and a man approaching with the gait of someone in charge. 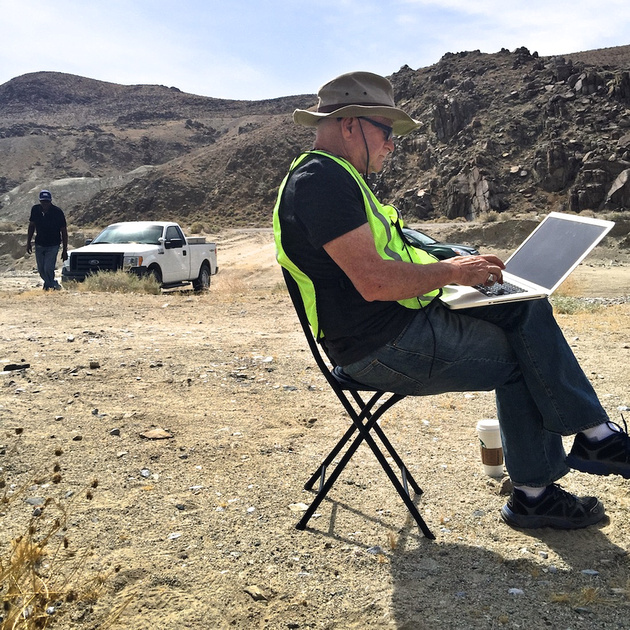 Cut to 3 minutes later: Apparently Christopher’s “Cloak of Invisibility” is defective and there were calls about suspicious characters tampering with Trona's water supply. After making sure we are on the up and up, company employee and 38-year Trona resident, Henry, fills us in with some interesting stories about the town's history.

We are now Facebook friends with Henry Jones, the Water Technician at Searles Valley Minerals. When he is off duty, we intend to come back and hear all the details about his years working for the company and living in Trona and Ridgecrest. How did these places become home for him?

The people of Trona love living here. Luckily for us, they also love talking about their lives in colorful detail. High & Dry agrees that coming back to Trona is like coming home. The people of Trona are the ones who make that feeling real.

We will explore in future dispatches why this town elicits such loyalty in its citizens. Is it because of the sense of familiarity, safety, or the feeling of belonging? Trona is a town facing severe economic, social and geographic challenges. Why do the people here remain stalwart in the face of such adversity? 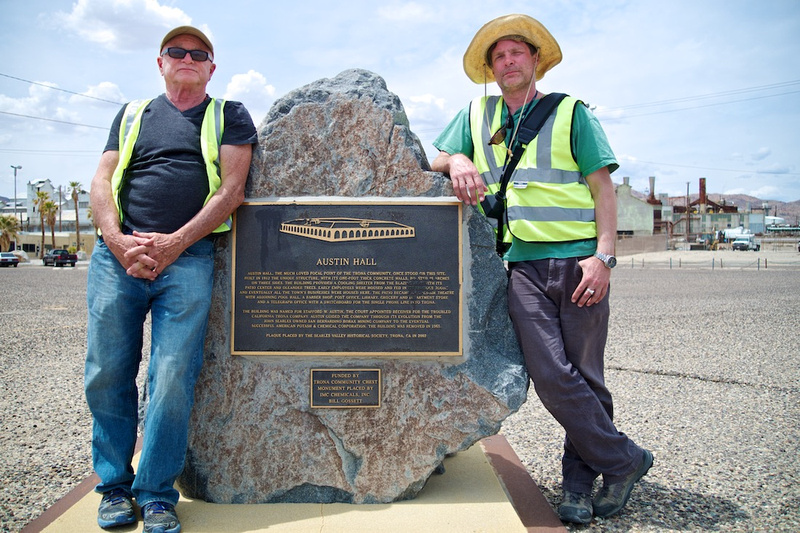