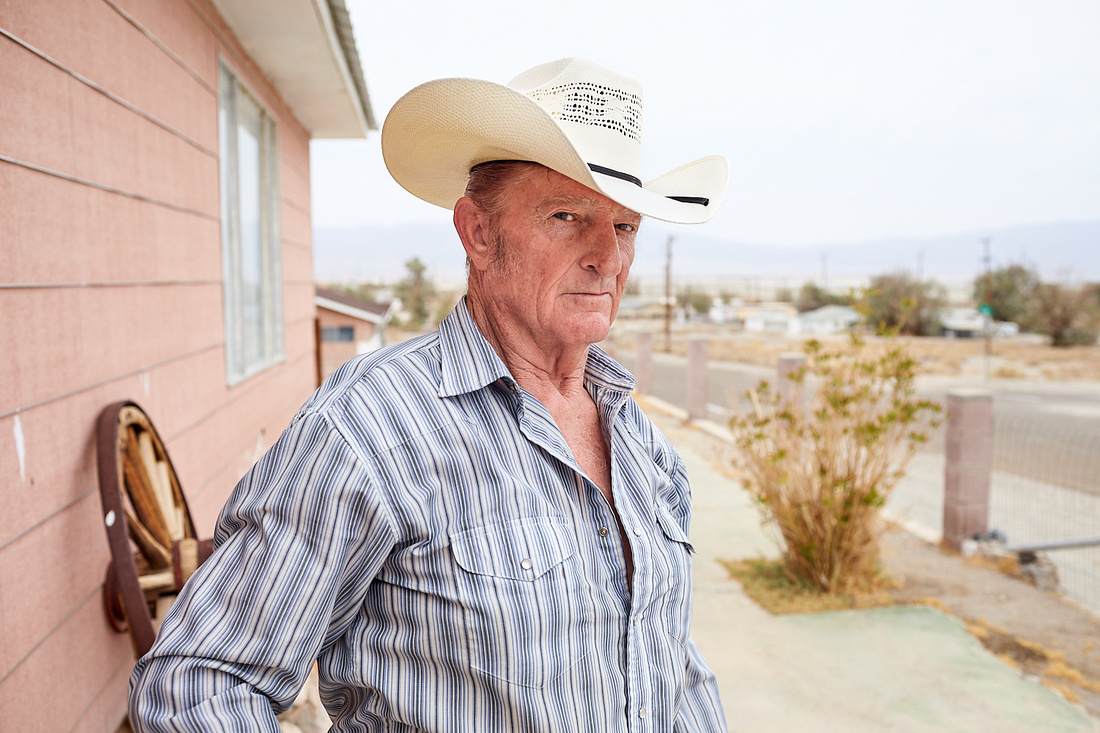 It is 1:46 pm and 101 degrees. That is rather temperate by Trona standards, especially for the beginning of August. He is standing out working in the yard under a steel grey sky. There is smoke in the air. Is it from the Argus or Westend plant or from somewhere else? Both plants are belching rolling clouds of vapor.

Benny Eldridge looks up with interest. Upon being asked, he tells how to find the Argus Cemetery, which is not far. He is very friendly for a life-long resident of a town that now could be dying.

He has his shirt off. Benny is a handsome man about 70, in good shape with the fading muscles of youth still visible. He needs to talk. He soon reveals that after several surgeries he is out of shape. He has kept himself in good shape for most of his seventy years. Benny intends to exercise to get back in shape once his joint surgeries have healed.

When he finds out he is talking to someone from Lone Pine, California, he says he knows Melvin Joseph who lives there. He competed against this rival in various sports. He immediately wants to send a friendly challenge to Melvin about their high school competitions. Benny loves to talk about his sports career.

Benny has spent most of his adult life in Trona.

He was born in a small town in Oklahoma. Then his family moved to Tulsa, a much larger town where they hoped to find work. They were always in search of jobs. From there they headed west because they learned of work at the Trona plants. At Trona High, he achieved many sports accomplishments.

Benny came to Trona in 1955. When it was time, like almost everyone else he knew, he went to work in the plant. That didn’t last for too long. He had other jobs, through which he supported his wife and children.

His wife never appears outside. He says she is talking on the phone. They were married in 1963. They began dating when they were 13 or 14 and have been together since then. Staying married, raising his children and now enjoying his grandchildren makes him a good family man.

He moved to his present house in June of 1983. It is large and could be located in almost any middle class neighborhood in America. It is actually in Argus, next door to Trona. When many neighborhoods in the area are disintegrating, Benny’s is a good family neighborhood street. The house has beige shingles and a stucco stone front. An old wooden wagon wheel accents the otherwise stark entrance. He has been working on the front yard today. He is very house proud.

When it is time for a portrait, he puts on his shirt. He mentions again he needs to get busy working out after his shoulder heals. He also puts on a cowboy hat. His face is ruddy from years of sun. His no-nonsense expression shows he has diligently worked for his family, his home and his community all his life. He has withstood some very challenging economic times during that lifetime.

He knows exactly how he wants to stand. It looks like a stance he might have chosen for the yearbook team pictures he undoubtedly posed for in the day. He stands showing his physique to its best advantage. His face is chiseled and stern, a pose that belies his age. There is a man of simple honor hiding just below the bravado.

Benny helped found the Baptist Church over near Pioneer Point.

Benny admires the minister of his church, “because he really knows his Bible.” Benny hopes the man of God will stay. He admires those who stay the course. He has tenaciously stayed the course for he knows that is what real men do.

Pierre Voyemant(non-registered)
Saw this nice piece a few years ago. Then saddened to see a news pic of their wonderful house devastated and the family displaced. May God save you and keep you.
Amy Hunt(non-registered)
Hello Benny and family, just wanted to let you know that I think of you often. Call me when you can. I love the article Benny. God bless you and your family. Amy
Chimene Eldridge(non-registered)
The most wonderful awesome man I know!!!! Love you Dad
No comments posted.
Loading...
Subscribe
RSS
© Christopher Langley & Osceola Refetoff