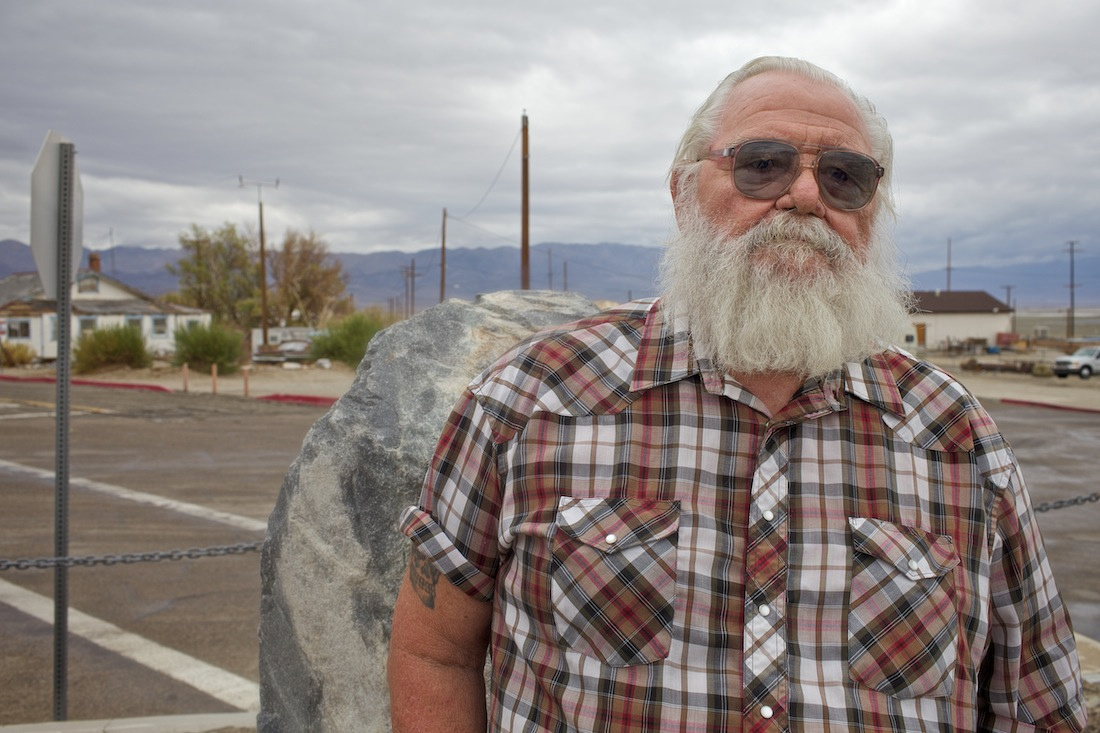 He knows where he’s at now. There is certainty in his voice when he states emphatically, yet gently, “God is on the move here.”

Gary Cartwell has a large presence, his beard announcing a patriarchal, almost Biblical, confidence that he knows about faith and God. He leans against the old wall of Austin Hall in downtown Trona. His wife of just a few years is prim and proper and seemingly tired. She does not want to stand on the corner talking about her faith. They have just come from the Trona Four Square Church’s Sunday service. They live in Ridgecrest now but keep up their connection to Trona. She is a retired Trona High School English teacher where she served for 36 years. It is starting to get warm. She retires to the car.

Gary is feeling gregarious. A loquacious person by nature, he doesn’t mind talking about his life these days. He is ready to testify to how he “once was lost but now is found” to quote the old popular hymn. Back when he was a hard working, hard drinking, philandering man here in this company town, he was lost. In his first marriage, he lived with another woman for twenty-three of the thirty years of the marriage. He was either working at the Westend plant or drinking and carousing at the local bars in town.

He lived in Pioneer Point, an upstanding place, but eventually sold his house and changed his life. He mentions coming to Trona, but having a chronically sick son who drove his life of drinking, carousing and being a lot of trouble to his friends. Finally he got religion.

How God crashes unbidden into peoples’ lives is a mystery. Theologians say that you cannot even create a space for God in your soul because that means the eternal and infinite Divine must fit into a small human-made “box” within a lost soul. Psychologists and sociologists offer tepid explanations of “reaching bottom” and sudden “psycho-spiritual” transformations of human personality.

Gary, along with millions of other Christians, places faith at the center of becoming saved. The mystery then involves faith or belief in something through apprehension rather than proof. That is counter to how our modern rational world is supposed to work.

He and Janice now live on the outskirts of Ridgecrest where they maintain their own kind of animal reserve, giving sustenance and a home to a lot of animals. They faithfully come back to Trona on Sundays for church. They return on Tuesdays to have lunch at the Senior Center. He now dedicates his life to one of service, helping other seniors in any way he can, including picking up their trash.

Gary’s life divides neatly between a self-centered, dissolute one and the later one of faith, service and loving his fellow man. The role of spirit and faith for the residents of this desert town is complex and always in a process of becoming.

He remains the living incarnate of God on the move here. Whatever doubts about his faith he might have, he is steadfast and sure of God’s love. He is also certain he is part of God’s simple calling to do good for others less fortunate. He knows he is a very fortunate man to have survived his first life.

I believe there is no greater calling than to live your life for others. This call to service comes when it does, not when you want or expect it. When it does,  all else in your life is just preamble.