VIEW FROM A MULE

At five foot six, I am shorter than most people. That means I have short legs, always have. Getting on a mule for me is questionable.

So when I start to get up on Blackie, a wrangler stands by ready to help. Luckily, I am able to scramble up onto her back, ego intact. Once I get my feet in the stirrups, the wrangler tightens them so I can push up on them. That will relieve the pressure on my backside and back during the eight-hour ride ahead. I can also kick the mule gently or not so gently and say giddy-up if need be.

I am impressed by how high I sit. I can easily imagine myself tumbling off at some point, but vanquish the image immediately. It will be brought back vividly to me later in the 18 mile ride. I am glad I refused my morning coffee because I don’t see a urinal on the mule’s back. I am sure we will not be getting off often during the day because the schedule is tight. 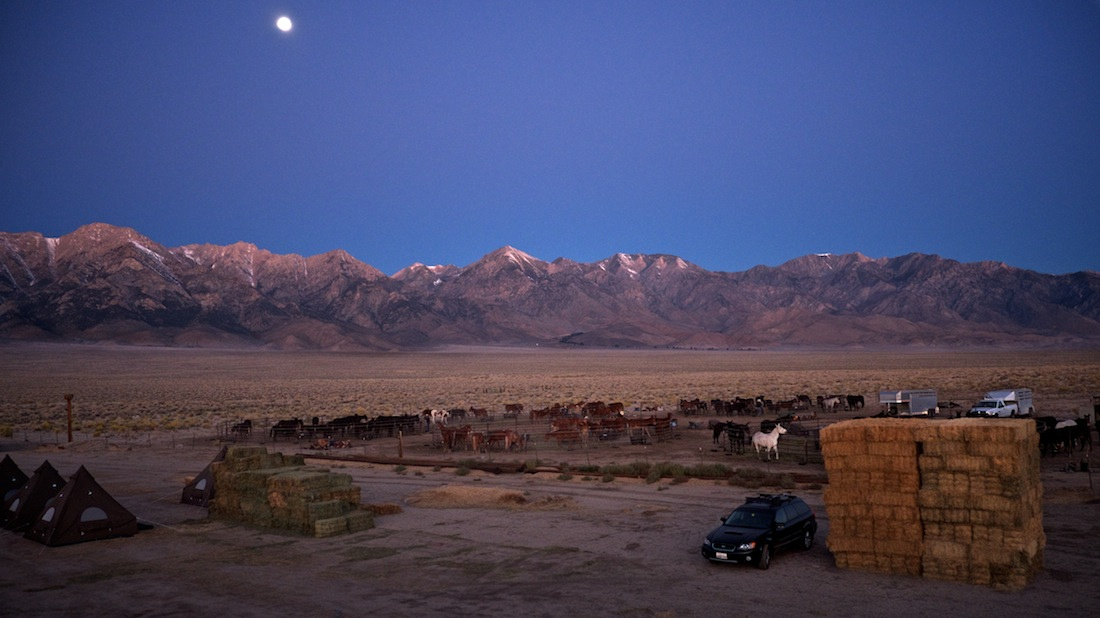 We are about to ride along the Los Angeles Aqueduct and through the Alabama Hills to Lone Pine, the invited guests of Lauren Bon as part of her art action “100 Mules Walking the L.A. Aqueduct.” I am excited and expectant about the experience.

The view from the back of a mule is from about five feet higher than we normally experience from a car or on foot. The pace is slow and rhythmic, part of nature. It is  different from travel by the more familiar motorized transportation. I can smell Blackie’s animal odor. It is rich and soothing. I feel good, if a little nervous. Can I actually do this? I ask myself.

The pace begins with a marked energized rocking. I eventually grow comfortable enough to spend more time looking around. My body and the mule’s walk bring me into being unified with the landscape. I begin to experience the landscape as a complex interconnected pattern. I am now just another connection in the whole. History and time’s record spreads out about me as I ride. All things start to connect across the land as a story told in a new and different way. 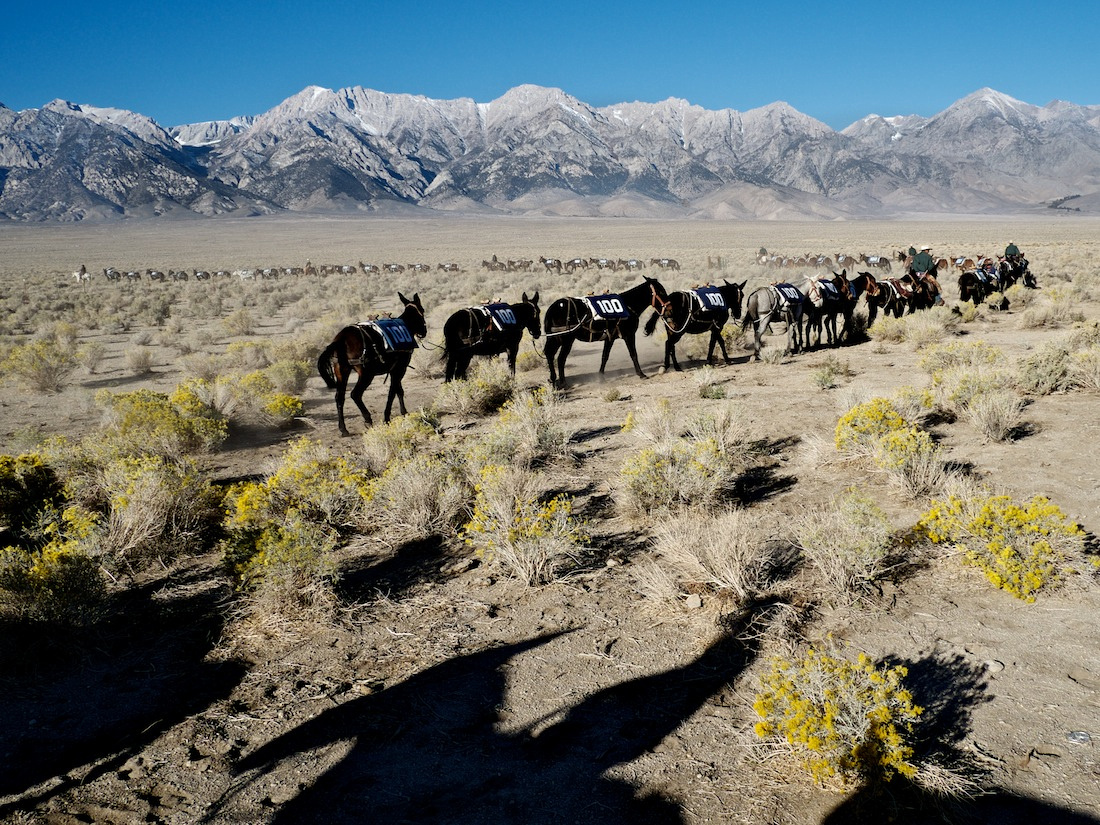 We leave in a long winding line of mules. There are only a few guest riders. To make a total of one hundred, several wranglers are leading groups of ten, tethered in teams. We leave from Zack’s alfalfa field. Zack Smith is a local rancher whose feed grass is one of the few agricultural crops still produced in the Owens Valley since the City of Los Angeles built and opened the aqueduct. It extracts and carries the water to the ever-growing metropolis. It has had water flowing for one hundred years now. This mule walk marks that event.

At this point historically the water has been diverted from the Owens River to flow through a large dirt lined ditched. Only down the road does it become cement lined and then eventually disappears underground. The fields here are large rectangular patches of green, unnatural in shape compared to the granitic brown hills and sharp ragged rock faces of the mountains.

Manzanar, the historic WWII Japanese Internment Camp, now a National Historic Site, slowly appears ahead. A rebuilt guard tower, with its penitentiary look, reminds me that once this camp was a prison. This is serious stuff. It was a place of imprisonment, a concentration camp for American citizens who happened to be Japanese and were illegally stripped of their constitutional rights. 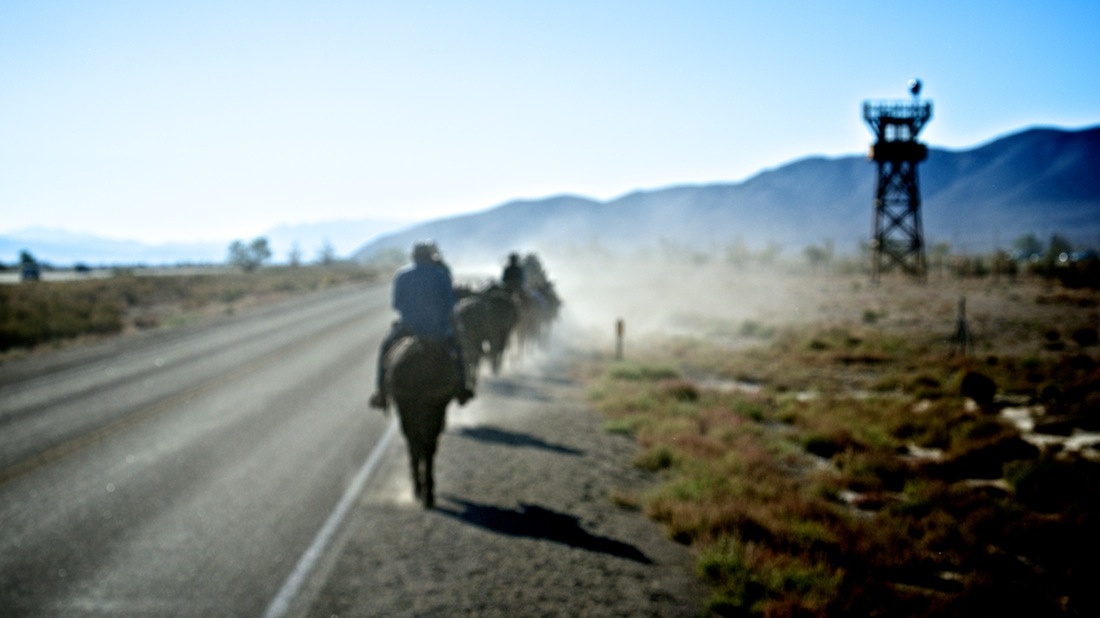 As we follow a winding trail west toward the Sierra, I pull a bandana over my mouth and nose because of the rising dust from the drought stricken land. Paths with archaic bridge crossings move north and south here. They were once used for the flocks of sheep Basque shepherds moved seasonally acrss the valley. Mary Austin beautifully describes this life in her books The Flock, Lost Borders and Land of Little Rain. She may have one day hiked along our same trail for she lived both in Lone Pine and then in Independence and loved the land and feeling it dusty under her feet.

Before coming to Hogback Creek and a brief watering stop for the mules, the long line of animals passes silently by a corral nestled in trees. It was once used to brand the range cattle that still graze here from local ranches. The winding line of animals slowly crosses the running water of the creek, but Blackie would rather grab leaves of bushes nearby to eat than drink. I am told not to let the mule get distracted and the moving tug of war begins as I keep her from wandering to greener forage.

The mule train moves to Moffat Ranch Road, named for a pioneer ranch that has been vandalized to the ground. Life was hard here with isolated cattle ranches scratching for desultory water sources. It’s always about water in this high desert. Where the creek flows, a line of green wanders towards the mountains, whose rain shadow, the maker of deserts, reaches west from the crest. This is now filming location land. As the designated film historian I start to recount movie stories as we move slowly south. King of the Khyber Rifles’ fort was then used as a building in The Adventures of Hajji Baba that became the great house of Barbara Stanwyck and Edward G. Robinson in The Violent Men. It was burned down at the end of that picture but then was replaced by the station of Comanche Station. Hollywood comes here still. I am soon where Iron Man and then Django Unchained filmed on Movie Road. The history lesson gives way to silence. 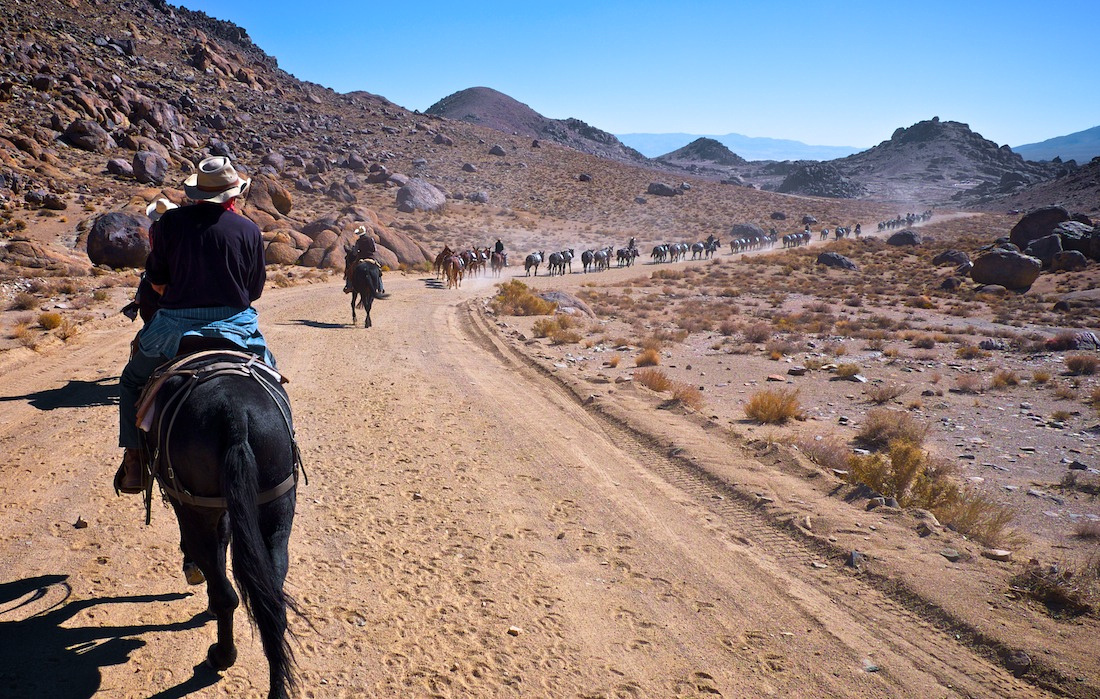 We get to a location where John Wayne made his last appearance before the cameras, a commercial for Great Western Bank five months before he succumbed to cancer. Trucks have brought water for the mules. I stumble off my mule to find a large rock behind which to relieve myself. I am not certain my legs are going to work, but they do and great relief ensues. Returning to my perch on the Blackie’s wide back is more challenging. As we head into the heart of the Alabama Hills we pass a mine, one of the few that produced significant ore there. I know below that is the rock walls of the huts for the Chicken Ranch, where a Mormon family lived in the forties. This ranch supplied fresh eggs to the town of Lone Pine then.

The beautiful sunlight has warmed me. My aches and pains lessen. I become almost somnambulant but startle to full alertness at a commotion just ahead of me. A mule has decided to turn over to scratch its back, forgetting the rider on top. I silently beg Blackie not to choose to deal with any itches. The wranglers give us a crash course in how to recognize a mule is about to rotate to upside down. Strategies based on human will versus mule stubbornness are shared but my friend Blackie behaves herself like a lady the rest of the trip. 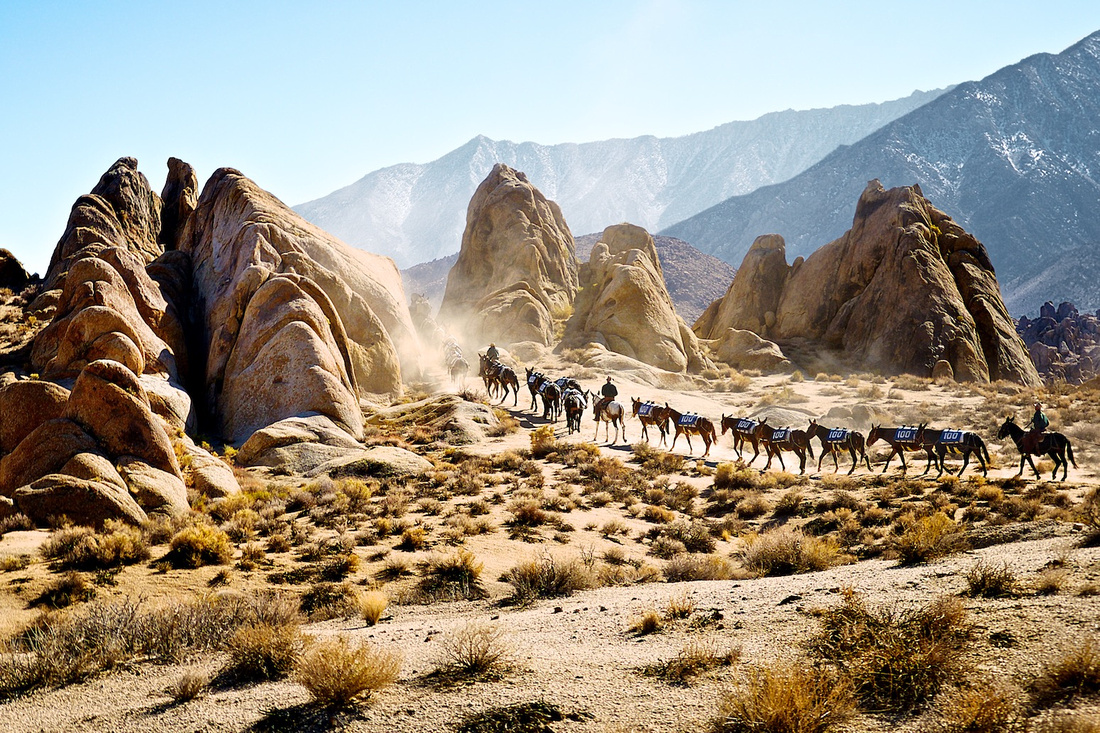 I am riding steadily for now the wranglers are pushing us to get to Whitney Portal Road. We are coming to the time allotted by the Inyo County Road Department to descend back into Lone Pine without traffic. The syncopated clop clop of the mule hooves, the sense of the end of our journey drawing near, lift my spirits even as we are driven steadily. The landscape is now gravel and boulders, moraines deposited by flash floods and the moving alpine glaciers from fifteen thousand years ago.

Quickly we pass over the giant fault line of the 1872 earthquake that propelled the California Geological Department to start to link fault movement causally with earthquakes. A quarter of Lone Pine’s population died that early morning. All the fifty plus adobe buildings were damaged or destroyed. As we cross the cement ditch of the aqueduct flowing south, I realize we are living here, simply waiting for the next big one. Denial assuages the fear. Lone Pine was rebuilt of wood within two years and once again celebrates the 4th of July in the Plaza now occupied by the Carl’s Jr. Restaurant.

I am becoming elated by the end of the journey. I have this beatific lash of all the history of the area connecting to make the landscape I am experiencing first hand from mule back. This land can be read as a history text, seen not sequentially but rhyzomatically like a pasture of intertwined grass roots. It is a vision of completeness that allows me to see history as one complex net, and my personal history connecting to all of it.

As I ride into the corrals behind the Lone Pine Film History Museum where once rodeos played out, I am filled with enormous joy. It is the joy of success, of meeting the challenge of doing something I thought impossible for me. But more than that, it is a vision of being at one with where I live. It is where I have raised my sons, prospered with my wife, and been part of a complex and historic community. 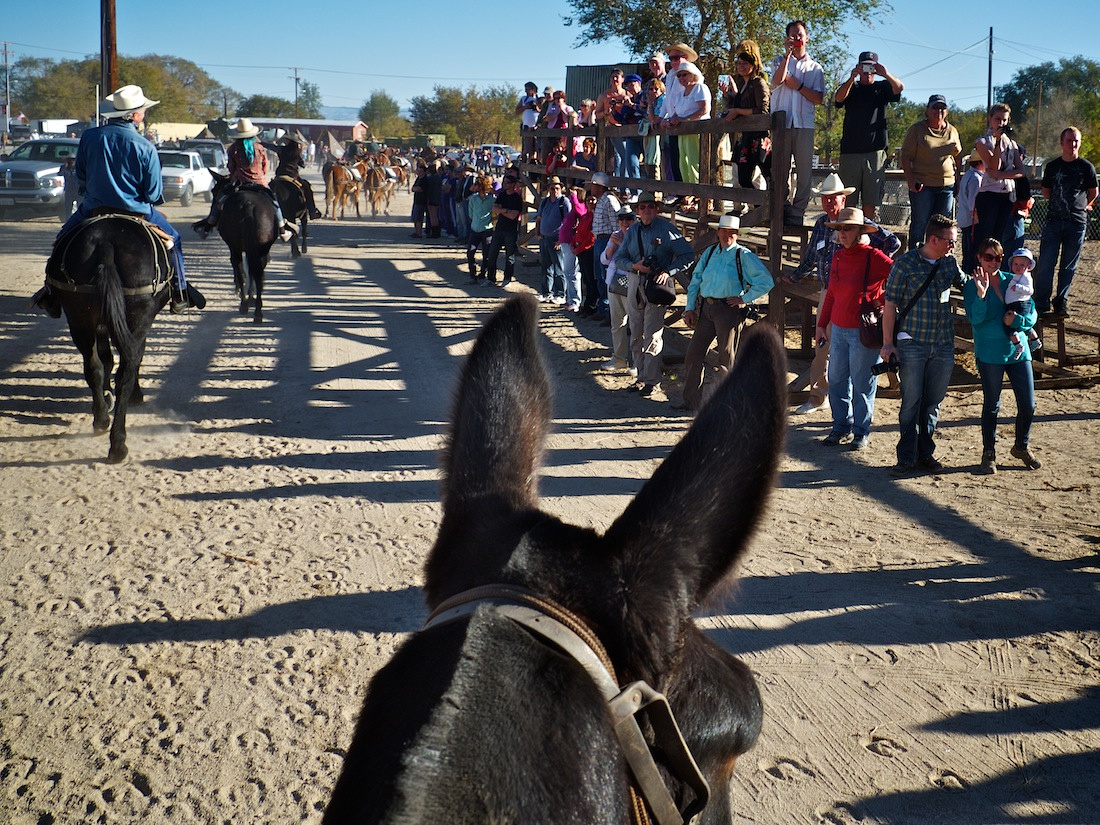 I slide from Blackie’s back, and hope my legs will hold me. My friends and fellow Lone Piners are there to greet me, thrilled I have done something so outside my comfort zone.

I love this land. Now I am so anchored in it from the view from the mule this day, I know exactly who I am.

Artbound’s 100 Mules Walking the Los Angeles Aqueduct will screen on KCET - Thursday, May 8 at 9PM 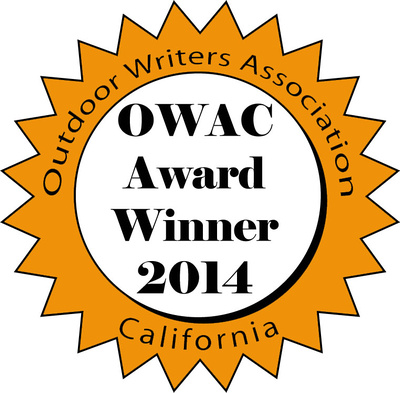