OF DESERT CASTLES AND HUMAN HUBRIS

I think natural disasters have been looked upon in the wrong way.
Newspapers always say they are bad. a shame.
I like natural disasters and I think that they may be the highest form of art possible to experience.
For one thing they are impersonal.
I don’t think art can stand up to nature.
Put the best object you know next to the grand canyon, niagra falls, the red woods.
The big things always win.
Now just think of a flood, forest fire, tornado, earthquake, Typhoon, sand storm.
Think of the breaking of the Ice jams. Crunch.
If all of the people who go to museums could just feel an earthquake.
Not to mention the sky and the ocean.
But it is in the unpredictable disasters that the highest forms are realized.
They are rare and we should be thankful for them. 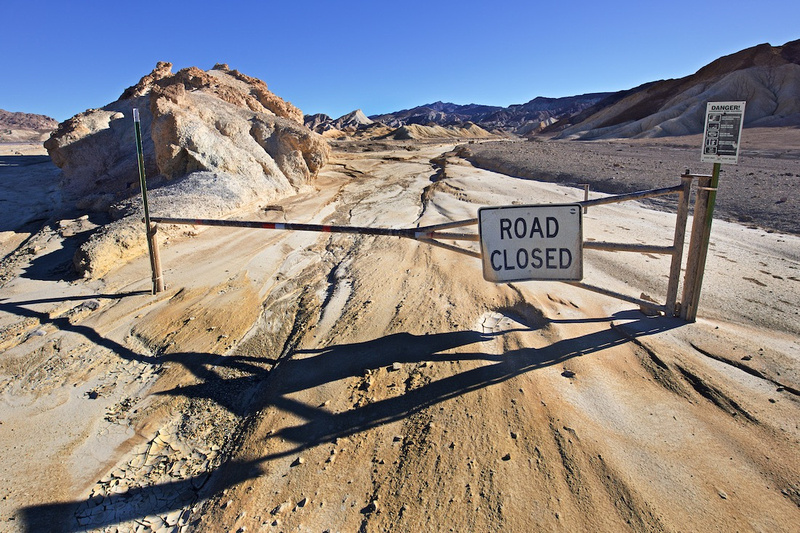 Nature has always created altered landscapes. Through disruption and construction, nature recreates and thus renews the landscapes of our home planet constantly. With the naming of our present period the Anthropocene, the realization is dawning on us that humans also create altered and disrupted landscapes. Some even argue we are the primary movers in that domain. It is a constant process and ineluctable. Some times human agents work quickly, other times it is a slow, almost imperceptible process. Humans are constantly and ever more persuasively changing our world.

This begs the question then “Was the flood at Scotty’s Castle in Death Valley a natural or human event?” It was both. Just because we are in the Antropocene, does not mean natural forces have ceased. No doubt several millennia ago, before human enterprise touched the area, there were floods. Once human activity impacts the area, each natural event was to a greater or lesser degree affected, even transformed.

No one was there to see or feel or watch this flood. 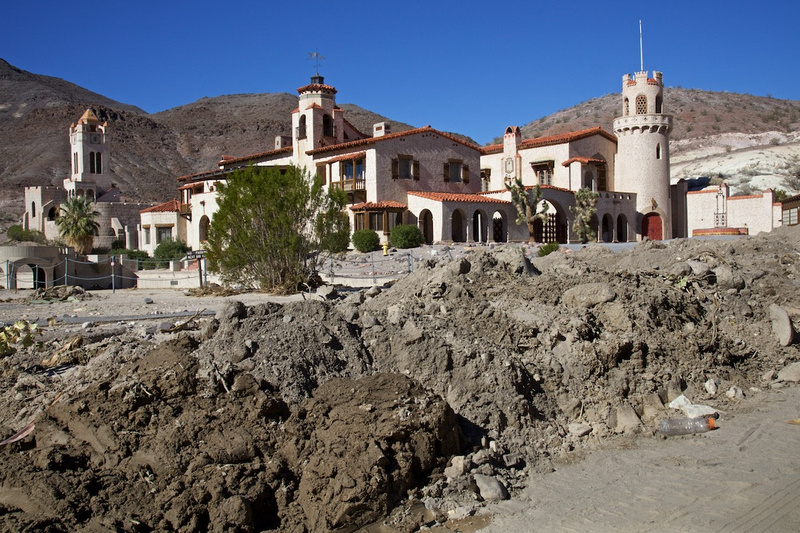 The conundrum of “If a tree falls in a forest and no one is around to hear it, does it make a sound?” is upon us. We are saved from this consideration simply by our imaginations.

This flood lurks in our imaginations as we stand before the ravaged landscape nearly a month later. The history, presence, destruction, and rearrangement of the rampaging water are very real in our minds none-the-less because it lies before our gaze. At this point we do not think about the human causal element in the natural disaster. I imagine the flood event: 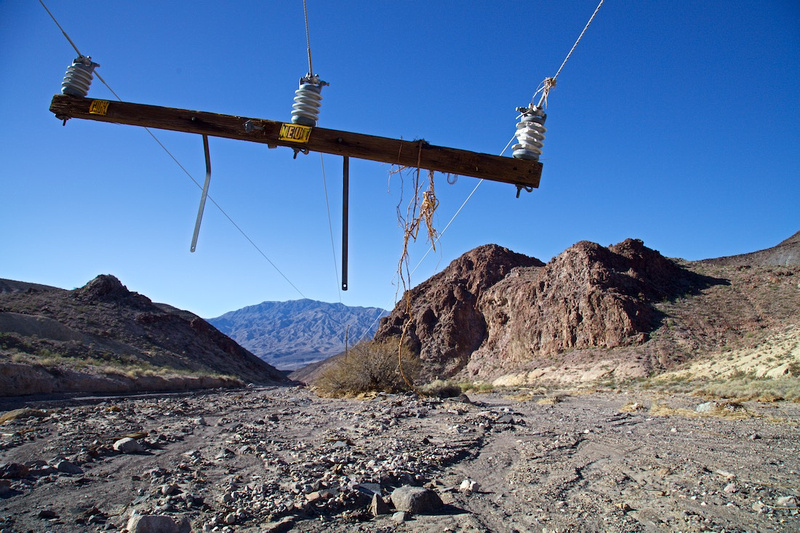 The surging water roars angrily down the canyon as the storm cell stalls over Grapevine Canyon. The downpours pulse with the intensity of the pushing fluid through a narrow, channel made of compacted yet pliant soil. Then begins the frozen battle with bullets of ice the size of quarters, beating down where thermals usually rise heated from the desert floor. The sound is deafening and the water and ice tear at the underpinnings of a mobile home a few miles from Grapevine Canyon where the nearest human huddles with her husband, fearing the land holding her home safe from the raging waters is eroding away.

The cacophony of crystalline projectiles builds to a crescendo that just won’t cease. On and on it goes unabated. What could possibly survive in the darkness? The war turns to a rout as the waves of mud, boulders, and silt rise like a wind-driven tide, mixed with grinding teeth of talus dragged down the incline. Gravity pulls irresistibly at this flow of slurry: mixing debris, dust, and expectation of total destruction. Soon a moving landscape of creation and natural destruction is sweeping on irresistibly in its seduction of the land before it. Human enterprise whether castle, asphalted road, swimming pool, or Hacienda appear no match for this churning current of fluidity. 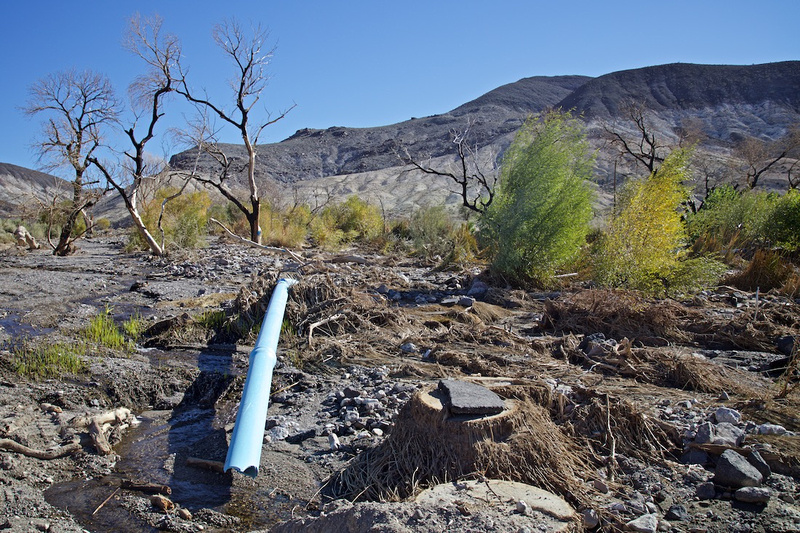 The storm cell seething with moisture as it rises higher and higher into the atmosphere, pumps precipitation out as it sits, a meteorological machine on a decaying, leaf-layered wreck of desert countryside. The mud now has the distasteful odor of fecund and life-giving decomposition.

A dead tree trunk, killed in the fire a few years back that ravaged two hundred more on the hill, is uprooted where the rampaging flood gathers strength. As the outflow takes shape, riding over its banks, the gnarled tree crashes through and turning with desultory movement snags on the edge of a building in its rush to freedom. The wood alcove of the structure, aesthetic in its simple repeated designs, catches the heavy trunk and swings it around as if suddenly animated with conscious intention. The water and increasing soggy refuses crashes over it, cascading on down into Grapevine Canyon, but in its madness saving the structure from sure destruction. The buildings are hydraulically blasted empty, and the furniture shredded to kindling. 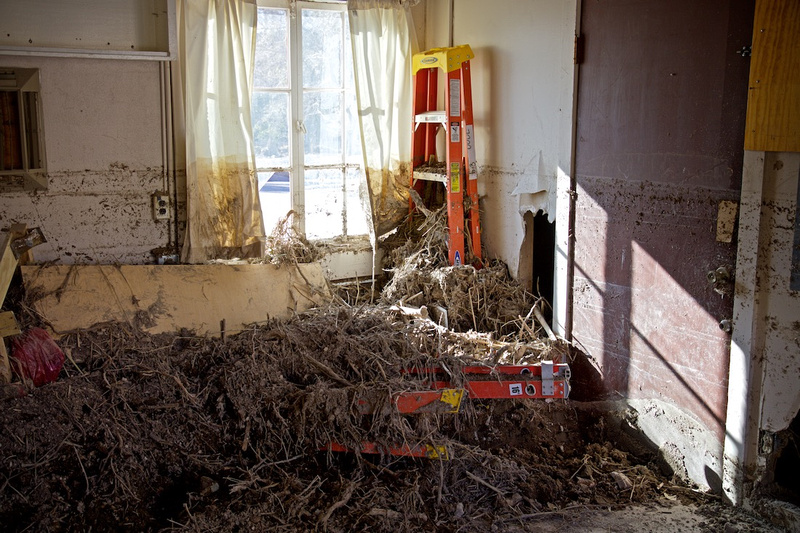 At first the schizophrenic current whacks away at the creosote bush, white bursage, brittlebrush, Parish goldeneye, desert tea, and rubber rabbitbrush from high up. Then as the water drops lower, it pulls up catclaw mesquite, desert willow, burrobush, Mojave rabbitbrush, bladder sage, and adventurous riparian communities. Nothing stands in its way; no matter how determined the roots cling to the eroding soil. Sodden detritus begins to snug up on corners and crevices. Trees, leaves, branches, brambles, and general wreckage stall like the storm itself. The scoured rooms slowly fill with the filth, broken branches, trash and splintered bones of everything built and grown above.

Eddies in the new riparian chaos turn from whirlpools to giant gyres of land eating whirlpools of waste. Piles of silt and mud and mysterious viscous batter accumulate, move, and insinuate into corners, cracks, and abutments. Slowly the mixture settles and thickens, finding a permanent home on the new surfaces. Suddenly a surge of angry fluid rips at the deposits and releases them. The flood is again loose upon the land. The inundation of water again worries the resistant pieces of human enterprise, weakens them until they resign to the liquid insistence. 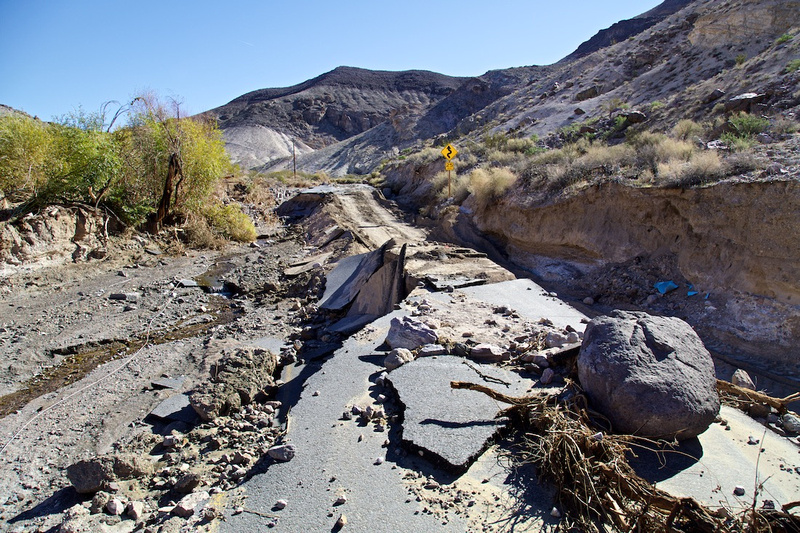 This is clearly the grandest of the floods, a thousand year flood, and the maximum flood event possible here. There have been other floods. In recent times, lesser floods visited in 1976 and 1983. Much erosion and damage was done to the Bonnie Clare Road, but the damage now boggles the mind with the channel taking over, undermining, and even consuming the asphalt ribbon. My photographer/collaborator climbs then clambers over the destroyed road past Scotty’s Castle. It makes the flood rerun in our imaginations as we see the power of he water.  It cannot be defeated or discouraged and certainly never turned away until it has done its thing, run its course, and followed its gravity-driven course to the destination on the valley floor. 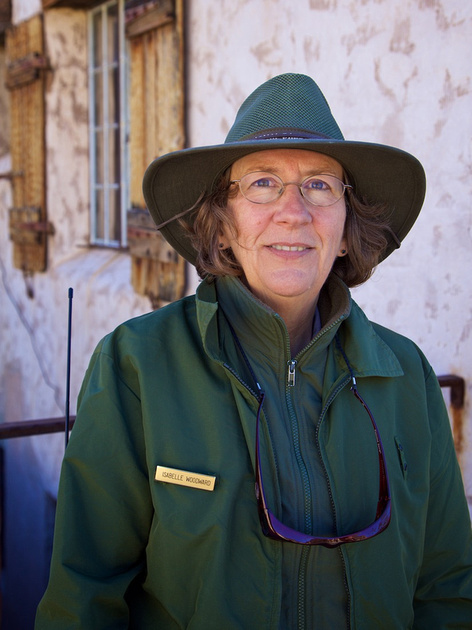 We stop and look at the destruction, at how nature rather than human intention has altered the landscape the way nature has for millions of years, using water, or wind, or volcanism.

As we listen to the sweet soft voice of Ranger/Guide Isabelle Woodward, still in shock from her disrupted life lived peacefully a few miles away. She has been relocated away from her home, threatened that hideous night of thrumming hail. We wonder at the damage and marvel that the Castle itself, situated through engineering knowhow, or protected by luck. It has survived this most terrible desert flash flood with only minor damage. 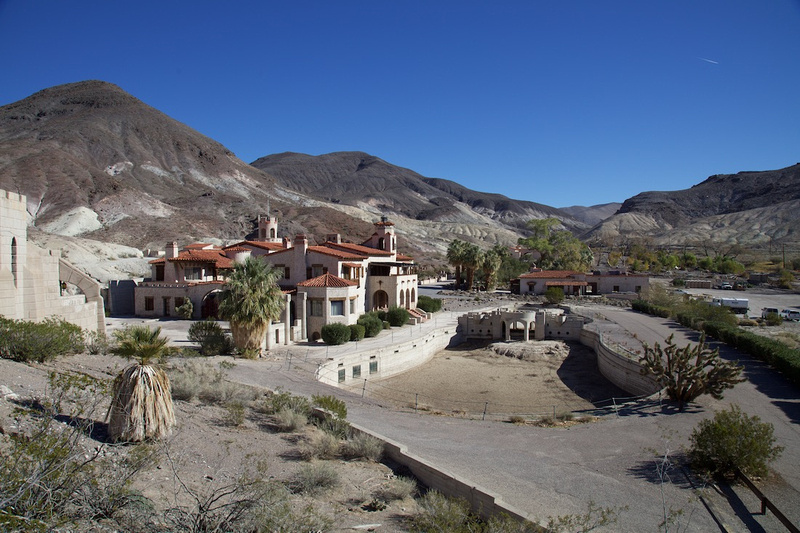 Environmental/land artist Walter De Maria compares and contrasts art and natural disasters with, in his mind, the disasters coming out on top. He suggests as well that there is a beauty in the altering process that forever changes the land before us. Are there natural aesthetic principles and processes accessible here? What of human caused floods, mutations, and transformations of the land before us. Are there equally powerful aesthetic principles that we (call us Anthropos, residents of the Anthropocene) can discover, operate, perceive, and even touch? This question teases our curiosity, sense perception and conceptual cognition. The two of us travel back to this world, more or less untouched by the thousand-year flood, to explore these tantalizing ideas, questions, and speculation to find new insight.

This desert castle, misnamed “Scotty’s Castle,” may be a human created interloper in this beautiful, deserted landscape, but it clearly has survived the thousand-year flood. It may even last another thousand years, still just the blink of an eye in geological time. Hopefully the human race can say the same. 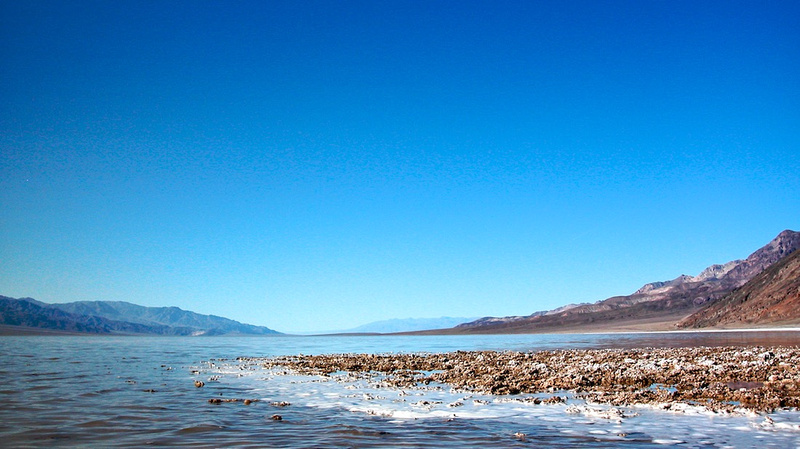 Desert Dispatches
Karl, thank you for your thoughtful comment! We share your hope that our species enjoys at least another 1000 years on this fair planet, a place that may look far different than it does today. On the other hand, I've seen studies about how human impact that appears so dramatic today, will be quite insignificant when viewed from a larger geological timetable.

We are very pleased that you are enjoying our Dispatches. High & Dry is about to post another one about Death Valley, this time about the salt pan at Badwater Basin. If you would like to receive Dispatches via email when they come out, you can add you email to the box above. Our best to you!

Karl Young(non-registered)
Thanks for the interesting and thoughtful dispatch. Having recently discovered Desert Dispatches I look forward to new dispatches and going back and reading past dispatches. Re. the comment "Hopefully the human race can say the same" I found myself reflecting on that. Though I generally celebrate much of humanity and its accomplishments, and certainly wish a painful demise to none, that reflection led to me to realize that I'm OK with human history being finite on a cosmic scale (though I do hope we have at least 1000 years left !).
No comments posted.
Loading...
Subscribe
RSS
© Christopher Langley & Osceola Refetoff