JEFF NEWMAN: HOME IS WHERE THEY HAVE TO TAKE YOU IN

Home is the place where, when you have to go there, they have to take you in.

The people who are born in a place that calls them back are lucky people. For if it is truly home, as Robert Frost assures us, then they have to take you in. For many, Trona is one of those places. But you can only decide to return if you left in the first place and for an extended time. You tried the world out there and it was found wanting. Born in Trona in 1955, Jeff Newman is back. He expresses an unemotional satisfaction about it, even if at the moment he is unemployed. Being temporarily unemployed is no big deal for him. 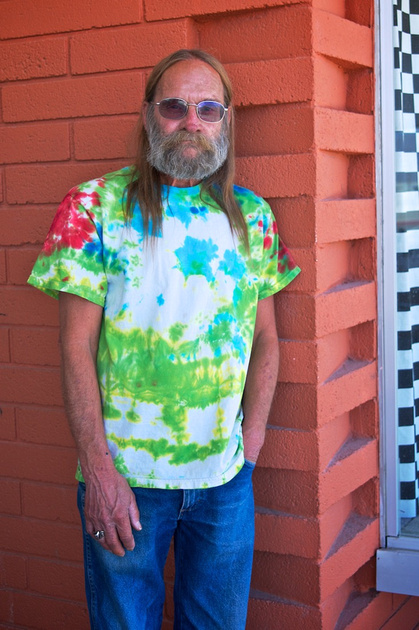 Jeff first left home when he was 19. It was 1974 and he hitchhiked around the country for two years, in search of America. It was only five years after the film Easy Rider (1969) had set the life quest for every kid like Jeff. He doesn’t say if he found America or not, but he does mention a commune in the Panamints. He said the winter there was just too cold. He came back home to Trona. His mom and dad took him in.

Now he candidly begins cataloging his two marriages. When he met his first wife, it was love at first sight. They eventually left Trona to go to Montana. They had 12 happy years before the marriage failed. He remains good friends with his first wife to this day. She lives in Trona still. She found a permanent home here as well. Jeff does not mention having any children.

When he found himself alone again, he travelled around the country for two years like he had as a young man. He speaks in a matter-of-fact staccato tone about it. Changing the subject, he talks about the vistas he sees every day now that he is back home. “I love the grand view, the quiet and the view of the mountains. The Slate Range with the different shades of brown. Then it goes to purple, then to dark purple. I remember one of those super moons when it started to rise.” He pauses as he remembers the beauty of the Trona landscape that night. He recollects wistfully the beauty of the super moon rising above the peaceful Searles Lake and surrounding desert.

His second wife and he live here now. They feel at home. A sister lives here and another in nearby Ridgecrest. He is one of those people in Trona who incontrovertibly belongs here.

When he works, he is well paid. Jobs are not that difficult for him to get because he knows a lot of people. He talks about when he offered help and it went on to become a job. “I volunteered at the Elks Lodge as a bartender, then went on to get paid.”

He worked at the plant with the boric acid crystallizer. “Here in Trona, the boss will hire local; you may be a little less qualified worker but if you come from here, or live here already, you are in.” Jeff continually references the advantages to being from here when you come back home, especially if you need to work.

“My father and mother came here in the late 1940s, after my dad Grady got out of the Navy. His sister already lived here.” There was a dirt road from Kramer Junction (Four Corners) then. “He was on his way to San Jose actually, but when his car broke down, he went up to the plant looking for a job. They called him back. My mother spent the first ten years crying because she wanted to leave, and the next twenty years crying for fear she was going to have to.” He smiles just at the corners of his mouth, and very tentatively.

His mother passed away a few months before. He had calmly mentioned it to Delores Hudson in the restaurant, but she already knew. His mother's name was Mary Ellen, and she was 80 years old when she passed. Born in Central City, Arkansas, she had lived in Lavaca, Arkansas before coming to Trona. She was a long-time member of the First Baptist Church of Searles Valley and spent many years volunteering as an EMT with Searles Valley Ambulance.  She is buried in the Trona Cemetery. That is another marker of where your home is. Her obituary in the Ridgecrest paper said she had nine grandchildren and ten great grandchildren.

“Living here is like living in a soap opera,” Jeff continues. “San Bernardino County is moving people here and life is easy, so they don’t have to work.” One wonders if that is an urban legend, or something to believe. Many people here are sure of it.

“There are burglaries every once in a while, but since you know everyone, it is easy to figure out who did it,” he says in a non sequitur. Jeff uses non sequiturs frequently.

In fact, Jeff’s life has been a kind of non sequitur; he is always searching for what he thinks he is missing. He now recognizes it. It is right under his feet. He has been looking for it elsewhere all this time.

The meaning of one’s life rests in the details of every day living. We dismiss these things as just ordinary and common. Suddenly John Lennon’s wisdom is clear: “Life is what happens while you are busy making other plans.” With the perspective of time we recognize how much more satisfying mundane events actually are than the unique, rare and sought after experiences we often seek in vain.

Jeff concludes, “There will be a Trona as long as there is a plant. They say there is enough brine for at least one hundred years of work.” He sounds like this time he means to stay home.