WALKING THROUGH TIME: THE LAYERED PAST OF RED HILL'S VOLCANIC VIEWSCAPE 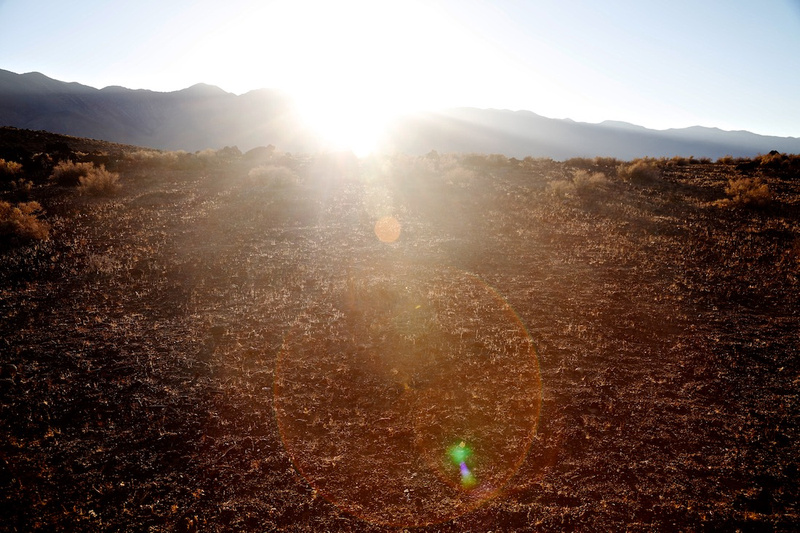 “Sometimes, when one is moving silently through such an utterly desolate landscape, an overwhelming hallucination can make one feel that oneself, as an individual human being, is slowly being unraveled. The surrounding space is so vast that it becomes increasingly difficult to keep a balanced grip on one's own being. The mind swells out to fill the entire landscape, becoming so diffuse in the process that one loses the ability to keep it fastened to the physical self.”

The sound of time whistles in my ears as I step on the landscape, stop, and look around.

I am embedded in a time machine of lava flows, pumice silt, and scoria sand as I walk about the landscape between Red Hill and Fossil Falls near Highway 395 in the California desert. The temperature withers above 100 degrees. Heat percolates off the red surfaces and fractured, jagged outcroppings left behind by a half a million years of heaving, melting, and ejection of the wine russet basalt.

Time is malleable and the air mellifluous with zephyrs as I climb the side of a crater, the walls of tiny grains moving beneath my feet with a muffled grinding sound. The tracks of an animal that passed this way before are melting back into the sanguine skin surfaces of an ever-metamorphosing beast of a million parts. The wind, an incline beyond the angle of repose, and the shifting of the crater’s walls have been active for more than ten thousand years. The cinder cone called Red Hill was created at this time as well.

The Red Hill’s cone itself rises in almost perfect symmetry to a flattened bowl at the top. An old man once told me there are Indian legends that go back seven hundred years which mark the last activity of this geologic behemoth by nicknaming it “The Growler.” The growling was mere mumbling of the earth falling dormant. These last gasps of activity through the chambers and tunnels deep within the earth were heard, felt, and remembered by the local native residents.

The eye dances with the soft lines of the cone against the bursting, cutting cerulean of the desert sky it is outlined against. My eye knows four basic patterns in nature: spirals, meanders, branches and explosions. Here in this tortured and once fiery landscape, patterns abound as my brain struggles to comprehend it all. This complex tangle of neurons searches out the patterns and finally, as it pauses, my aesthetic seeking soul understands the beauty before me. 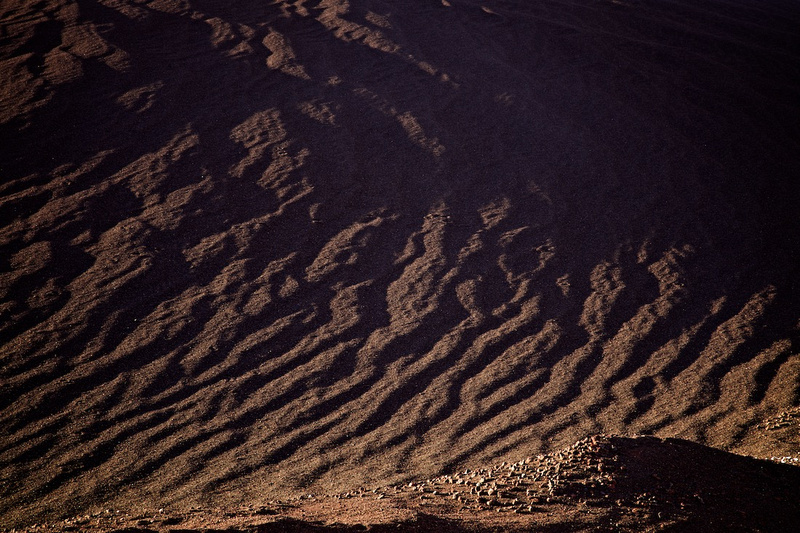 I am standing on the lip of a cinder crater. As I look down, I see its ivory colored floor, with branching and cracking created through desiccation. In the not too distant past, the bowl held water. This silt was captured there and dried to cracking. Craquelure in old paintings are now reflected in nature’s process. A basic principle is “pattern follows process,” although some times in nature it can be reversed. Process has led to the art term craquelure in painting and to an astonishing beauty. Weak humans sometimes imitate the effect in modern work. This is disparagingly called cracking. Here it is the nature’s master process working without aesthetic motive and it stands as natural art.

On the incline of this crater there are small isolated plants, cushion shaped, fiercely announcing their persistence in the harsh environment. On the branches of these saxicoline plants are small BB sized buds. They are tight against the arid air, and I do not know if they will ever open or ever were intended to. But the plants are decorative and repeated green balls remind me of tiny elfin necklaces. I wonder if there are such things as desert elves or are they just found in northern German hard wood forests.

Off to the east there is Volcanic Mountain nestled into the Coso Range, a once very active fire range, now tattooed by cones, obsidian domes, and lava flows. I close my eyes and, travelling back, smell the sulfurous smoke and hear the exploding mountain now weeping red burning lava down across this land. Are my feet melting? Are my shins aflame? This geological time travel awakens deep fears. No, now it is ossified rock, sharp as knives. These waves of molten rock poured south and covered granitic detritus left from eons before by alluvial deposit. Then fast forward to one hundred thousand years ago; just snap your fingers and you’re there.

Again a giant sizzling wave of super heated liquid rock makes its way down towards the south and west. It exudes through the Little Lake Gap. One geologist jokes “It is where the Coso Range and the east base of the Sierra Nevada Mountains ‘shake hands.’” This wave makes it to just under four miles from modern day Pearsonville before it slows and cools. So viscous and vesicular is it that it forms a towering cliff to almost five hundred feet. 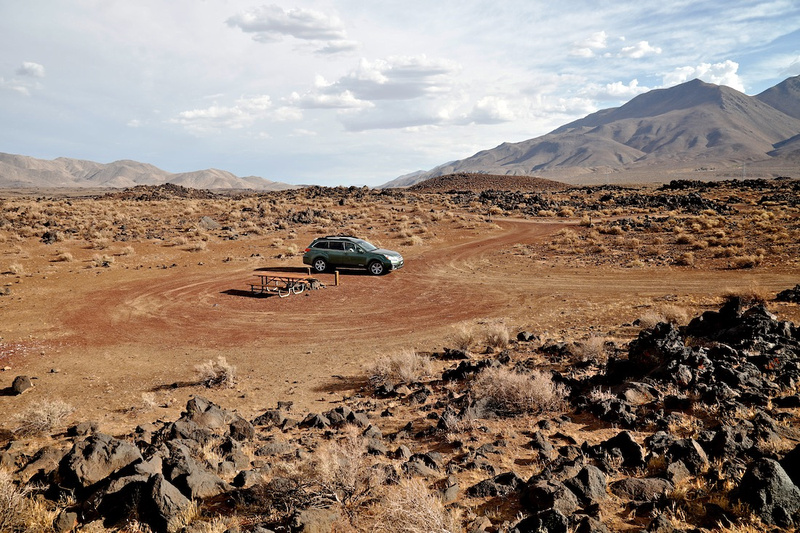 I walk through the malapai fields beyond the unimproved (read primitive) BLM campgrounds. There is no water but there are bathrooms not too far away. The lava chunks appear to rise from deep beneath its lithic mother’s breast. But in fact they have ridden on the ineluctable flows to where they now reside. Explosively ejected granitic material frosts these fields of Vulcan.

If I stop and drift back through one hundred centuries, I can hear the roar of a double cascade, and smell and feel the vapor plume of cold mountain streams, recent snow and ice, rising above the tumbling thunder. The upper fall is irregular and meandering through potholes and whirlpools down across burnished basalt. Two hundred feet below is the second falls, shining like a sheet of slippery silver. The water in the upper falls, wears away indentations that gradually become vortices, turning water to grinding at the rock with grit, sand, pebbles, and cobbles.

Now the red to brown to black lava shines like a treasure filled lair. It is possible to slide, inch, and stretch your way through a labyrinth of these eroded twists and turns. I am entering another world entirely. In this case, the Falls are the fossils themselves. I drop away through jagged passages, here and there a scrape on an arm or elbow. The fossil falls canyon is the end of the journey through time.

The desert landscape is an open book to read like an ancient tome with page upon page each holding a layer of our land’s life story.

dissertation writing service(non-registered)
Regardless of how frequently I read it, it never gets old. You certainly hit the nail on the head on this one. This is something individuals need to think about. Your blog is really mind blowing and the design is really first class. Really, your blog is mind boggling. It’s important that they know how the structure of online blogs workout.
No comments posted.
Loading...
Subscribe
RSS
© Christopher Langley & Osceola Refetoff