HENRY JONES: STUMBLING ON WHERE HOME IS

It's a bizarre but wonderful feeling, to arrive dead center of a target you didn't even know you were aiming for.

Meeting Henry Jones was a serendipitous event. We were photographing the “throttling” installation in the Trona water system in Poison Canyon when, after several calls from passersby that “some guys were messing with our water system,” he thought he better get out there and investigate.

Osceola had posted an Instagram only three minutes before. He wrote, kidding me as I sat writing about the water system, that I was wearing my “cloak of invisibility.” That is the term we have for our neon yellow vests, the same that are worn by most construction workers for safety. A large white pick-up pulls up and we know we are in trouble.

Henry Jones, Water Technician for the Searles Valley Minerals Company, the domestic water division, saunters up slowly. I think he is sizing us up. What he sees is a photographer crouching low, toiling to capture the twisting pipes and rust-spotted valve stems lying in the wash by the side of Highway 178. By now, after 38 years here in Trona, Jones is probably used to city folks who want to photograph the “damnedest peculiar” things. Here is a bald writer, but with a sun hat, sitting on a very small folding chair, typing away on his MacBook Pro in the bright noonday sun. And you thought, according to Noel Coward, that only mad dogs and Englishmen go out in the noonday sun. Rocker Joe Cocker referenced that too, even on a record cover I think.

Immediately Osceola is explaining our project, sharing our postcard and business card and the latest issue of The Sun Runner: Journal of the Real Desert containing one of our stories. He is the very epitome of the ad man selling our project to prove we’re on the up and up. Henry, it seems, is interested in what the photographer is saying. The more we talk the better we communicate with each other. 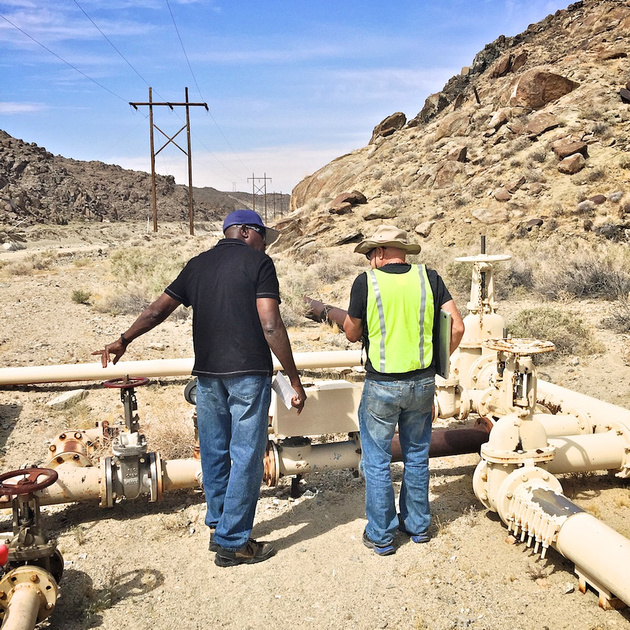 Soon, at our inquiries, Henry is telling us his story. He was born in Louisiana many years ago. After moving to San Diego, he needed money fast and found temporary employment at the Trona plant.

There is something about Trona that he likes immediately. Those were very good years for the town. He thinks it would be great to stay and call it home. He has plans for college though. When he discovers he can pursue his studies at night at Cerro Coso College in Ridgecrest and still continue to work in Trona, he stays. Thirty-eight years later he still works here, though now he lives in Ridgecrest where he is raising his family. These days Trona is hurting, but Henry doesn’t seem to like it any less.

Henry has an easy-going manner, friendly and articulate about his life. He accidentally found where he was going to live the rest of his life. Somehow he recognized it as home, and it has remained that ever since. He knows he is just lucky that all this has worked out. He seems happy and he looks young for having already spent thirty-eight years in the harsh desert climate.

Henry explains that the throttling area that fascinates us is where they control the water pressure in the long pipe as it brings water from the wells near Ridgecrest, fully twenty-five miles away. Last year, during the Trona Centennial, a “local” told me that in the summer the sun beating down on the pipes heats this water. “You don’t have to heat the water for your shower. It arrives pre-heated.”

Henry agrees that is true. “People from Ridgecrest talk about how bad the Trona water is. It’s kind of funny because it basically originates where theirs does. It is the same water.” But he explains there is now a water filtering plant in Trona that addresses various dissolved minerals and biological matter that come with the water. “There are some very powerful chemicals involved, that are removed before the water leaves the water plant. The water does seem to have an added taste now,” he reports reluctantly.

Henry is a handsome man. He removes his sunglasses so Osceola can shoot a portrait. When he does so, I am surprised how large, kind and gentle his eyes are. This is a good man who found his home by luck when looking for temporary work. Luckily, he recognized it as his future home. Henry has spent the rest of his life making it so. Finding home in our busy, transitory, and ever-changing modern lives is harder than ever.

All three of us have found our homes, albeit very different ones: Osceola’s, the giant modern metropolis of Los Angeles; mine, the severely rural, very small town of Lone Pine; and Henry, an area beset by economic, ecological and industrial complexities. Can we know what will become home before we see it? Or is home where your heart discovers its own true and unique nature? What of those who never discover home at all?

Our future work in Trona holds many mysteries to be contemplated, questions to be asked, and answers to seek over the course of our on-going investigation of the town and its citizens.

David(non-registered)
In the 1940 census John A Pillott occupation is listed as "Water Supply Foreman." John and his family lived at Valley Wells. I believe John was in charge of the fresh water coming from springs in the mountains, the salt water wells that filled Valley Wells and was used inside the AP&CC plant and well as the water coming through Poison Canyon.
No comments posted.
Loading...
Subscribe
RSS
© Christopher Langley & Osceola Refetoff