INTO THE FOREST PRIMEVAL: TAMING THE SUN; BUILDING A HILL

If you take one of the alphabet avenues of Lancaster, California and drive straight east, you enter the forest primeval. The Joshua trees (yucca brevifloria) go out in all directions. Their regular spacing is cut by the straight avenues of asphalt and matching straight cross streets named by numbers and directions: 20th Street East, for instance. Civilization superimposes real grids and virtual grids upon the land wherever human activity has occurred.

Here east-west roads are called avenues and north-south roads are called streets. The city is essentially on a perfect grid. The traffic signals are coordinated by a central processing facility at the Civic Center. 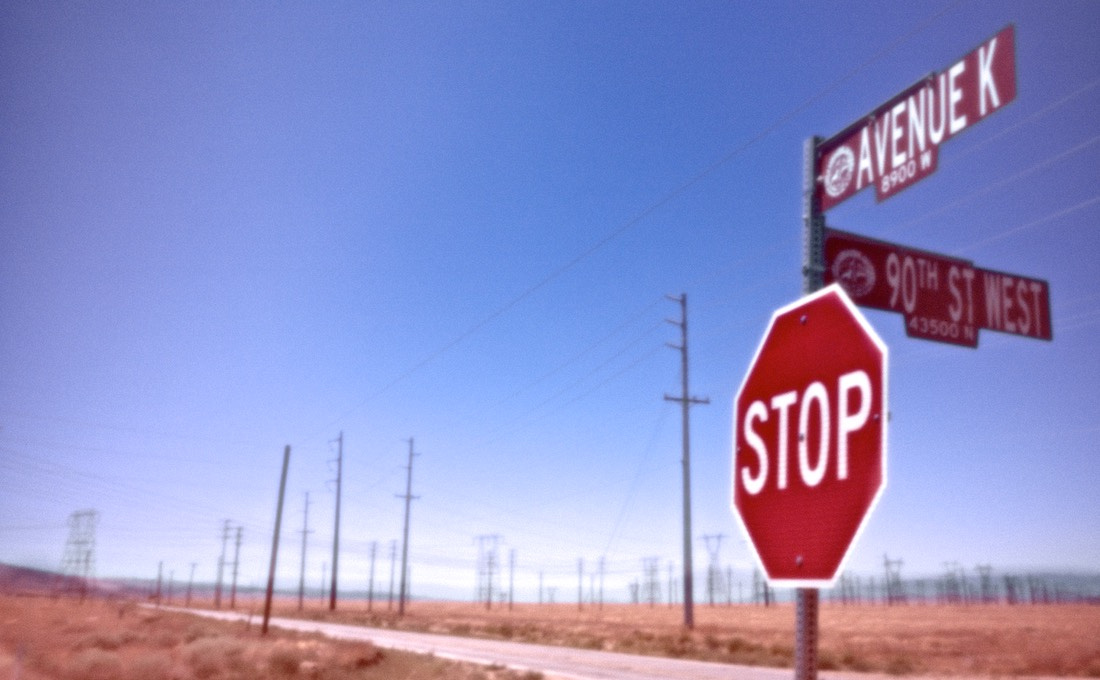 The good news is that Lancaster is trying to ameliorate the lack of imagination in street naming. 10th Street East is now called Challenger Way in honor of the shuttle of the same name.

This day the air is heavy with visible dust and suspended particulate matter. The Joshua trees loom spiny and twisted out of the dismal air. It is easy to imagine a dinosaur prowling about.

One crossroad is marked with roadside memorials. Something terrible has happened here. The crosses vary in size, style and make-up but all have Hispanic names on them. Burned-out prayer candles with Our Lady of Guadalupe or other saintly figures and religious icons testify to vigils for those lost. They demonstrate that this crossing of two straight lines with extended visibility is still very dangerous. These memorials stare a defiantly from the corner hillock on which they are perched. Below them an obscene diagram has been spray-painted on the cement face of drainage pipes. The dry cistern is full of desert detritus. Old cigarette packs, plastic containers, bleached newspaper pages with forgotten headlines and all sorts of wrappers mark the area as one of discard.

Not far away the futuristic towers of a solar plant stand sentinel to this forest primeval. The sun peeks from behind the lenticular clouds that announce the wind. These meteorological signs are both spidery and shaped like piled plates in the sky. The wind has already begun. Wisps of dust blow by. At the moment the sun is insipid and offers little power to this giant solar apparatus designed to capture its energy.

There is a tower that is like an Iranian minaret in appearance. Other skeletal towers rise in a pattern around it. The project overview explains dispassionately, The Sierra SunTower facility is based on power tower CSP (concentrating solar power) technology. The plant features an array of 24,000 heliostats divided between four sub-fields that track the sun and focus the energy onto two tower-mounted receivers. The concentrated solar energy boils water in the receiver to produce super heated steam. The steam is piped to a reconditioned 1947 GE turbine steam turbine generator, which converts the energy to electricity. The steam out of the turbine is condensed and pressurized back into the receiver. It takes up 8 hectares or 20 acres of an arid valley of the Mojave Desert at 35 degrees north latitude on private land.

The Sierra SunTower, a proud green energy over-achiever, has won many awards. Its builder trumpets that it reduces CO2 emissions by 7000 tons a year, equivalent to planting 5,265 trees, removing 1,368 automobiles from the road, or saving 650,000 gallons of gasoline. Still the air smells industrial and metallic here. The plant can be seen through a sturdy chain link fence. A still pond of water reflects it all. Then the wind ruffles the surface and all shimmers out of sight.

On the near horizon looms a hill that is being excavated by trucks on roads spiraling methodically in a rising circle. Wait! The trucks are adding to the hill, not mining it for mineral wealth. This is a man made hill striving to become a mountain: the Lancaster Landfill & Recycling Center. It is a 276-acre ziggurat of garbage and waste right in the middle of our forest primeval.

The website goes to great lengths to assure the visitor that it is very safe. We are leaving behind us a monument to waste and garbage that grows daily taller and wider. Every opportunity is being taken to recycle, reclaim, repurpose and isolate our waste into wastelands. Here there is also a growing ruin of a landfill as a monument to how we live.

I want to stop and hike to the top. I want to plant an American flag like our astronauts did on the moon and claim it for our national pride. I don’t. Instead I circle the landfill outside the chain link fence in my car and drive into the Joshua tree forest primeval in the swirling dust of another windy day in east Lancaster.

I jump on the freeway and go home.